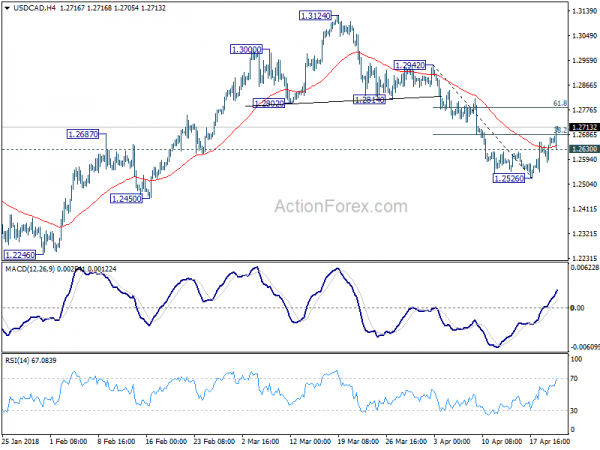 Dollar’s broad based rally continues today and is showing sign of acceleration. In particular, while Euro has been rather resilient, EUR/USD is starting to be dragged down by others as it dips through 1.23. While there is still some way to go, focus is now back o 1.2214 support and a break there could prompt further rally in the greenback. Meanwhile, Japanese Yen seems to be relatively immune against Dollar as USD/JPY is still bounded in range below 107.77. As the current rally in Dollar is more driven by surging treasury yields than anything else, development in both will be the main focus before the week closes.

The Loonie has been under some much selling pressure after BoC left no indication of a near term rate hike earlier this week in its rate decision statement. BoC also revised down 2018 growth forecasts and sounded cautious on a number of uncertainties, including NAFTA renegotiation and geopolitical tension. NAFTA talks are carrying on in Washington today. As Canadian Foreign Minister Chrystia Freeland noted yesterday, there were “good progress”. But she didn’t indicate on a timeline to finish it, just saying “we’ll work as long as it takes to get a great deal”.

Sterling stays week as BoE May hike is far from certain

Sterling turned a bit mixed today but not because it’s stabilizing. The Pound remains under pressure against Dollar and Euro. There was also sign of acceleration in the selloff. But for today, Pound selling is overwhelmed by selling in commodity currencies instead. Sterling is so far the second weakest for the week, just after New Zealand Dollar.

Sterling was initial quite resilient after triple data misses this week. But BoE Mark Carney’s comments somehow closed the case for it. The key takeaway from Carney’s comment is that he tried to tone down the chance of a May hike. He said “we have had some mixed data … We’ll sit down calmly and look at it all in the round.” He added that “there will be some differences of view but it is a view we will take in early May, conscious that there are other meetings over the course of this year.”

A BoE May hike is now far from being certain.

EUR/CHF is another major focus of today as it breached 1.2 handle to 1.2004 but quickly dipped back. The reaction to this 1.2 handle is worth some attention, not just for it’s being a historical floor set by SNB. But also, rejection from 1.2 could prompt a pull back in Euro elsewhere. And as a chain reaction, deeper selloff in EUR/USD could push up the greenback elsewhere.

At this special moment, SNB Chairman Thomas said in an interview that the depreciation of the Swiss Franc is in the “right direction”. Nonetheless, the currency as a safe haven is prone to change and the situation is “fragile”. So the SNB will “remain very prudent”. Jordan added that “there’s no need to do anything regarding monetary policy at this moment”, as “we are convinced that the current monetary policy is still necessary.”

Japan national CPI core slipped back to 0.9% yoy in March, down from February’s 1.0% yoy, meeting market expectations. It will take a few more months to see if it’s only a blip or a change in trend. Core inflation had an impressive up this year but momentum has been slowing. It’s already looking a be challenging for inflation to meet BoJ’s own media projection of 1.4% in the current fiscal year. And BoJ might need to delay the timing for hitting 2% target again, if the slowdown in inflation persists.

Separately, BoJ Governor Haruhiko Kuroda stepped up his warning on protectionism, as he arrived at the G20 summit of finance ministers and central bankers. He said there will be “quite comprehensive” debate on trade during the meeting. And he emphasized that “many countries share the view they benefit greatly from free trade, so I don’t think protectionism will spread and lead to a decline in global growth. But the risk is there.” He added that “protectionism isn’t having a huge impact on Japan’s economy yet. But the risk is right in front of us, so we need to carefully watch how developments unfold.”