EUR/USD – Has Trump Ended the Decline? 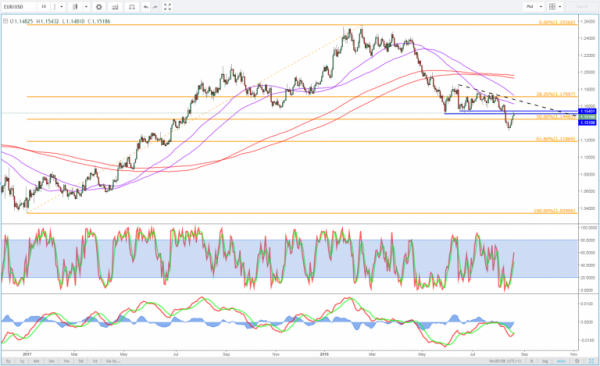 Donald Trump’s recent comments on the dollar, in which he openly criticized the central banks of the US and the eurozone, may have provided some temporary reprieve for the pair but is that all they’ve done?

The euro hit a near-14 month low against the greenback last week, having broken below 1.15 support which had held since the end of May, with the US currency benefiting once again from safe haven flows. These declines have been pared in recent days, following Trump’s comments, but it’s not yet clear whether it will be enough to prevent further selling.

There has been plenty of speculation that Trump could be tempted to intervene and weaken the dollar, which has aided the recent move, but in the absence of any more than that, I wouldn’t expect this to have much legs. Of course, I wouldn’t be surprised if Trump capitalized on such fears to his advantage.

From a technical perspective, while the latest decline was not accompanied by a similar drop in the stochastic or MACD indicators, which could indicate a weakening of the recent downtrend, they don’t on their own suggest it’s bottomed either.

We’re now seeing the previous 1.15 support being tested from below and a rebound off this level could be viewed as confirmation of the original break, a bearish signal, which would put the focus back on 1.13 where we ran into support last week. We would also learn, in this scenario, just how serious traders are taking the prospect of intervention.

Should the pair break above 1.15, 1.1650 would be another area of interest, with price then testing the descending trend line from 14 June highs, and 55 and 89-day simple moving average combination.