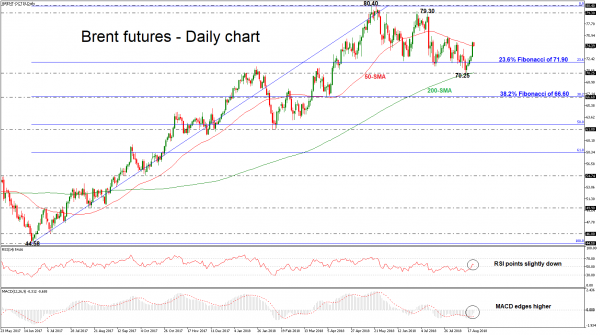 Brent futures have surged over the previous five consecutive days following the rebound on the 70.25 level, which coincides with the 200-day simple moving average (SMA). Also, the price still holds above the 50-SMA and the technical indicators are moving in the positive territory. The MACD is advancing above the trigger line, however, the RSI is sloping slightly to the downside above the 50 level.

If price action remains above the 50-day SMA, there is scope to test the 79.30 resistance level, taken from the high on July 10. Clearing this key level would see additional gains towards the 80.40 barrier, where it topped on May 22.

On the other side, if the price fails to stand above the 50-SMA, then the focus would shift to the downside towards the 23.6% Fibonacci retracement level of upleg from 44.58 to 80.40, around 71.90. A drop below this level would open the way for the latest low of 70.25. If this level is breached, it would increase downside pressure and bring a reversal again of the medium-term uptrend. From here, oil would be on the path towards the 38.2% Fibonacci, which overlaps with the 66.60 support level.

Overall, Brent has been bullish since bottoming at 44.58 in June 2017. Despite that, the latest month posted a bearish correction.