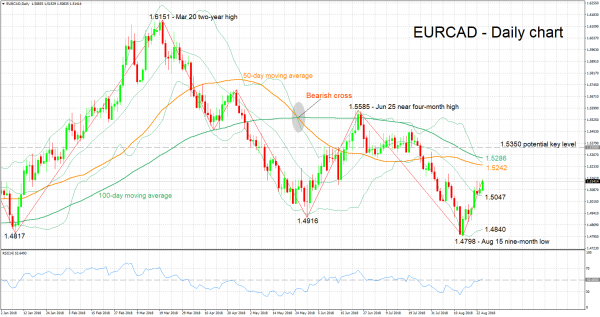 EURCAD has risen by roughly 350 pips after touching a nine-month low of 1.4798 in mid-August. Earlier on Friday, it posted a 16-day high of 1.5153, while it is currently trading not far below this peak.

The RSI is climbing in support of a bullish short-term picture for the pair.

Stronger gains may meet resistance from (and around) the zone between 1.5242 and 1.5286, which includes the 50- and 100-day moving average lines, as well as the upper Bollinger band. Further above, the region around 1.5350, which was congested between late June and late July, may be of significance, acting as an additional barrier to the upside.

On the downside, support could occur around the middle Bollinger line – a 20-day moving average line – at 1.5047. Steeper losses would increasingly bring into scope a previous bottom at 1.4916 and subsequently the lower Bollinger band at 1.4840.

Despite the recent gains, the medium-term picture remains predominantly bearish: the pair is in a downtrend, recording lower high and lower lows, while price action is taking place below the 50- and 100-day MAs lines. A move above the MAs – notice that the price is not far below them – would start tilting the outlook to a more bullish one.

Overall, the short-term outlook is bullish at the moment, while the medium-term one continues to appear mostly bearish.