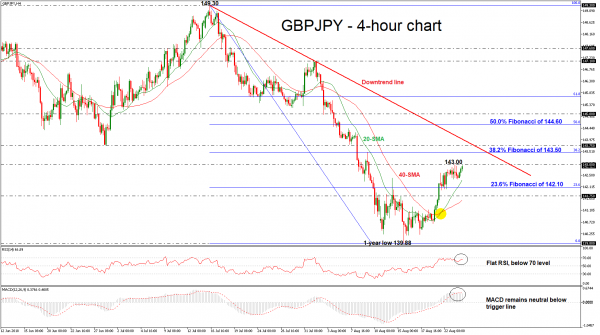 GBPJPY has been outperforming today and seems to be ready to challenge the 143.00 psychological level again. In the short-term, the price has moved higher after the rebound on the one-year low of 139.88, achieved on August 15. However, the technical indicators seem to be flat in the positive territory. The RSI hovers below the 70 level, while MACD remains neutral below the trigger line.

However, in the case of downside movement, the 20-simple moving average (SMA) could act as immediate support near 142.37 and a drop below it could drive the pair until the 23.6% Fibonacci of 142.10. In addition, the 141.75 hurdle could be hit if there are more downside pressures.


Overall, GBPJPY remains positive in the near term as it stands above the 20- and 40-SMAs, which recently posted a bullish crossover in the 4-hour chart and is in a strong position to retest the descending trend line – major resistance barrier that been standing since July 16.