Gold Closes above 1,200; Breaks Descending Triangle to the Upside 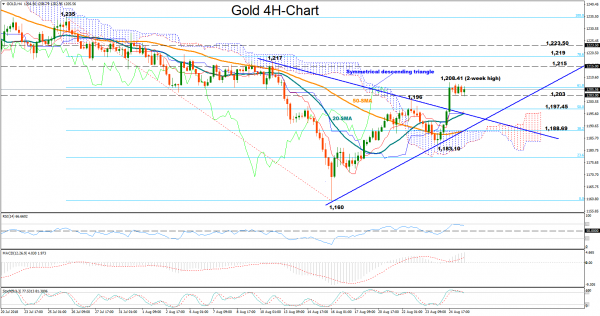 Gold’s impressive rally on Friday paused around a two-week high of 1,208.41 after the RSI and the Stochastic oscillators touched overbought levels above 70 and 80 respectively in the 4-hour chart. While both indicators have already turned lower, suggesting that downside pressures could dominate in the short-term, the MACD continues to move higher in positive territory above its red signal line, giving some bullish signals for the market. Besides, with prices having already run significantly above the Ichimoku cloud for the first time in a long while, breaking the descending symmetrical triangle as well, the trend is more likely to hold up.

An extension to the upside could retest the 1,208.41 peak which is marginally above the 61.8% Fibonacci of the downleg from 1,235 to 1,160 before traders look for resistance between 1,215 and the 78.6% Fibonacci of 1,219. Any move above the latter could trigger further bullish actions, opening the way towards 1,223.50, a previous support and resistance level.

On the downside, bearish corrections could stop near the 1,203 mark which acted as a support the past couple of days, whilst any close below that could see the price falling until the 50% Fibonacci of 1,197.45 in which case the short-term outlook would shift from bullish to neutral. Below from here, if the market continues to weaken, the 38.2% Fibonacci and the 50-period (simple) moving average (SMA) both at 1,188.69 could be the next targets.