What correction? Popular ‘FAANG’ stock portfolio is already back to new high 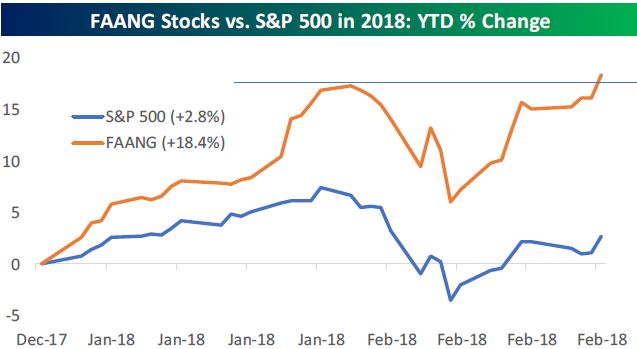 A group of high-flying stocks that have led the bull market are indicating the correction may be over.

An equal-weighted portfolio of the stocks is up 18.4 percent this year, versus the S&P 500’s 2.8 percent gain, Bespoke said in a Friday report.

The FAANG stocks are among the largest in the S&P 500 by market capitalization and have in certain years accounted for a significant portion of the index’s gains, while many other stocks lagged. Apple, Alphabet and Amazon are the three largest S&P 500 stocks by market cap, while Facebook ranks fifth and Netflix is 41st.

All five stocks are up year to date. Netflix is the greatest gainer, up nearly 49 percent, and Amazon is next at 28 percent.

Month to date, Facebook and Alphabet are down single digits, while Netflix is the best performer with a gain of nearly 5.8 percent. The S&P 500 is down 2.7 percent for February after suffering its first correction in two years earlier this month.

A correction is a drop of at least 10 percent from a recent high, while a bear market is a decline of 20 percent from the high. Stocks remain in their second-longest bull market on record.