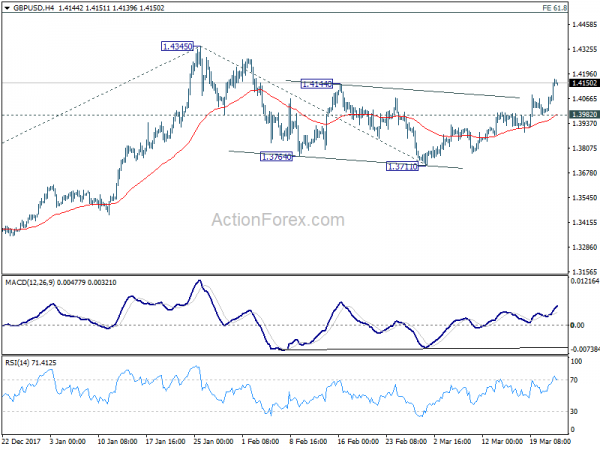 Dollar stays broadly pressured today as post FOMC selloff extends. While Fed delivered the widely anticipated rate hike, it maintained the forecast of a total of three hikes in 2018 only, not four. Aussie is the only failing to join the party against Dollar today after weaker than expected job data. Sterling remains the strongest major currency for the week even though it turns slightly cautious against Euro and Yen today. BoE rate decision is the main event to watch and any hawkish twist in the announcement would propel Sterling further higher. In addition, Eurozone will release PMIs and German Ifo. US President Donald Trump will also finally announce his tariffs against China.

BoE to stand pat but may indicate a May hike

BoE is widely expected to keep the bank rate unchanged at 0.50% today. The asset purchase target will also be held at GBP 435b. After this week’s events, the announce has become very lively. The announcement that UK and EU has reached the Brexit transition deal has given the pound a strong boost. It still has to go through EU summit at the end of the week but that should just a matter of formality only. The development also cleared an important uncertainty for BoE in its monetary policy consideration.

Sterling’s strength was somewhat limited later by disappointing inflation data. CPI slowed more than expected to 2.7% yoy in February, versus consensus of 2.8% yoy. Core CPI also slowed to 2.4% yoy, below expectation of 2.5% yoy. But later, the pound was lifted again by employment data as unemployment rate dipped to 4.3% from 4.4%. More importantly, wage growth showed acceleration with average weekly earnings including bonus jumped to 2.8% 3moy.

On the one hand, Brexit development would remove an excuse for BoE doves to urge for patience. On the other hand, the strength in wage growth now gives BoE hawks a bullet to push for rate hike. Sterling could be shoot up again if BoE announcement today signals that it’s getting closer for a May hike. That could be come by a twist in the language of the statement. Or, it could be signaled by some votes for hike by hawks like Michael Saunders and Ian McCafferty

Trump to announce USD 50b tariffs on China today, China fights back… verbally… for now

Trump is set to announce the tariffs on 100 different types of Chinese goods today, as follow up to the section 301 of the Trade Act of 1974 investigation. Bloomberg reported that the targeted amount would be at around USD 50b annually. White House official Raj Shah also said in a statement that “tomorrow the president will announce the actions he has decided to take based on USTR’s 301 investigation into China’s state-led, market-distorting efforts to force, pressure, and steal U.S. technologies and intellectual property.” It’s believed that the tariffs won’t take effect immediately. And the list of targeted products will be finalized after industry input. But it’s only confirmed when it’s confirmed.

The MOFCOM criticized that the US has “violated WTO rules, repeatedly abused trade remedy measures, which has seriously damaged the fair and just nature of the international trade environment and weakened the stability of the multilateral trading system.” The MOFCOM also pledged to oppose “protectionism by the US ahead of any possible trade measures against China” and to ” take all necessary measures to resolutely protect its interests”

Separately, a former vice commerce minister and now an executive deputy director of the China Center for International Economic Exchanges, Wei Jianguo, warned that “if Trump really signs the order, that is a declaration of trade war with China.” Wei said “China is not afraid, nor will it dodge a trade war.” And, there are “plenty of measures to fight back, in areas of automobile imports, soybean, aircraft and chips.

FOMC’s rate hike of 25 bps to 1.50-1.75% was fully expected. . What caught market attention the most was the median dot plot (which continued to project 3 rate hikes in 2018) and the upgrades in the economic projections. US dollar plunged from almost a three-week higher after the announcement. The message delivered in the accompanying statement and by Fed Chair Powell at the press conference was not as hawkish as some had expected. In particular, the median dot plot continues to point to 3 rate hikes this year (two more to come), rather than a total of 4 hikes in 2018. More in FOMC Projects Two More Rate Hikes This Year, Followed By Three In 2019.

NZD is relatively steady after RBNZ kept OCR unchanged at 1.75% as widely expected, and maintained a dovish stance. Outgoing Acting Governor Grant Spencer gave an interview before handing over to Adrian Orr. He noted that RBNZ shouldn’t comment on NZD’s exchange rate. And, he emphasized that “we should only comment on the currency if it’s really pretty clear that it’s out of alignment and you’re wanting to have some impact, some sort of jaw-boning effect”. Though, he acknowledged that “in the past we have got into this situation where we sort of had to make a statement about the currency and if we didn’t the market was going to react.” But then, he also said that NZD is “in the vicinity of fair value”.

In the accompany statement, RBNZ maintained that “monetary policy will remain accommodative for a considerable period.” It said, “inflation is expected to weaken further in the near term”, before heading up to 2% target “over the medium term”. And, “tradeable inflation is projected to remain subdued through the forecast period.” At the same time, “non-tradables inflation is moderate but is expected to increase in line with a rise in capacity pressure.” Regarding the economy, “growth is expected to strengthen, supported by accommodative monetary policy, a high terms of trade, government spending and population growth.”

Looking ahead, while BoE is the major focus, there are other key features in the calendar too. Eurozone will release PMIs and German Ifo business climate. ECB will release monthly bulletin. UK will also release retail sales. Later in the day, US will release jobless claims, house price index, PMIs and leading indicator.