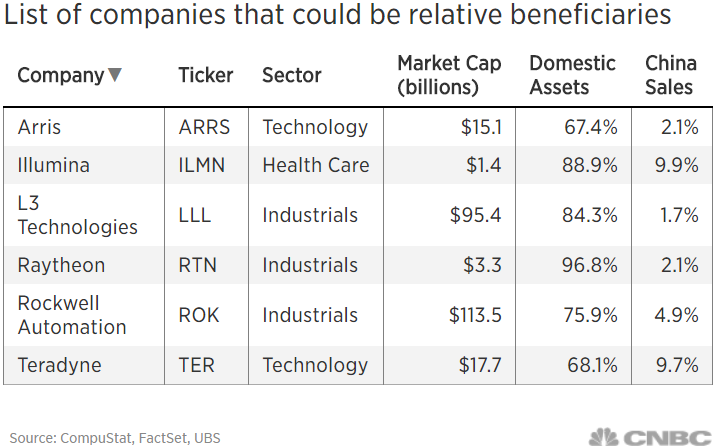 Several companies will benefit relative to the broader market if a global trade war breaks out, UBS told clients Monday.

In light of President Donald Trump’s tariffs on Chinese goods and proposed levies on industrial and technological imports, a number of domestically oriented companies in those sectors could be safer stock bets, according to Keith Parker, UBS’ head of U.S. equity strategy.

Trump’s recent move to impose tariffs on up to $60 billion in Chinese imports stoked fears of a global trade war last Thursday, when the president announced that the action would be “the first of many.” Beijing responded the next day, saying it may target 128 U.S. products with an import value of only $3 billion; the action – though mild – was enough to spur concerns of broader, more intense retaliation down the road.

Parker screened the S&P 900 for companies that could be affected by the Trump tariffs, concluding that aerospace and machinery companies like Raytheon and Rockwell Automation could outperform.

Here are some of the companies UBS highlighted.