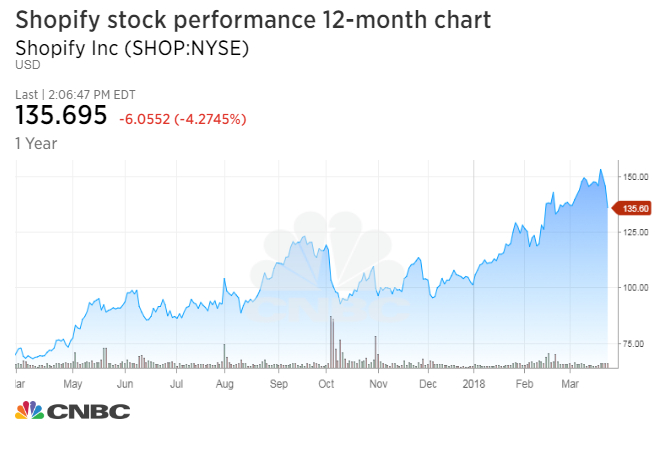 Shares of Shopify fell more than 3 percent after Left disparaged the relationship between Shopify and Facebook as an “unholy alliance,” based on the exchange of personal information collected by Facebook and sold to Shopify “entrepreneurs.”

The Citron chief also said that Shopify shares should immediately trade back to $100 per share, $35 per share below their current price.

A Shopify spokesperson offered this comment to CNBC: “Shopify offers the technology for businesses to sell on their own websites, in retail stores, on marketplaces like eBay and Amazon, and on social channels like Facebook and Pinterest. The power of our platform is that we offer one interface for merchants to sell anywhere and everywhere. It’s incorrect to say that our merchants’ success is tied to Facebook and its data.”

Facebook, meanwhile, is currently entangled in one of the company’s largest crises to date. The social media giant is under fire over its handling of personal data following reports that research firm Cambridge Analytica wrongly gained access to personal data of more than 50 million Facebook users.

Shares of Facebook fell as much as 6 percent Monday after the Federal Trade Commission announced it is investigating the company’s practices. The investigation likely adds to a growing list of reasons the company may elect to further restrict access to its data in the future.

Despite poor performance from both companies’ shares on Monday, Shopify’s stock has surged roughly 100 percent over the course of the past 12 months. Left, however, attributes this fact more to a swell in Shopify’s number of “stores” and customer base than meaningful profit growth.

“Shopify’s stock price is perched on the halo of increased merchant count, which all of the growth and the bulk of the numbers is from the ‘entrepreneur count,'” Left explained. “More importantly, the gross merchandise volume per merchant [ratio] is collapsing as the entrepreneurs are struggling to actually ‘get rich.'”

The short seller has been a frequent critic of Shopify, telling clients in October that the company was “dirtier than Herbalife.”

“Shopify says they have 2,500 Shopify plus merchants out of their universe of 500,000. Now let’s say they have another 20,000 Shopify Advanced,” Left said in October. “The question I ask you, the question no one on Wall Street has addressed is who are the other 450,000 merchants on Shopify?”

Since Left’s October note, shares of Shopify are up 37 percent through Friday’s close.