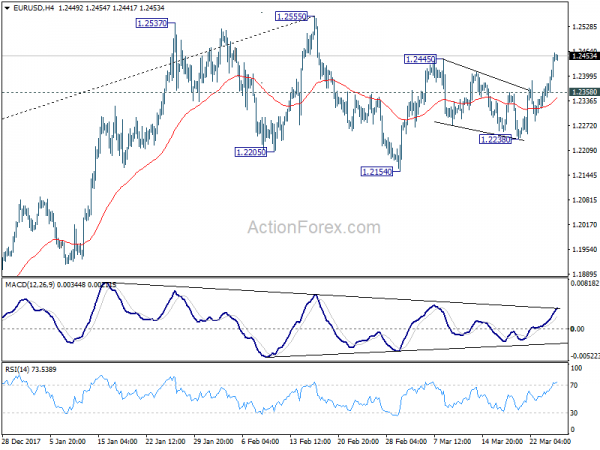 In the currency markets, Yen is paring much of its recent gains as risk aversion receded, and it’s trading as the weakest one for the week so far. Euro and Sterling are the strongest ones thanks to yesterday’s rally. But Canadian Dollar is picking up some steam in Asian session too. Trading could start to turn quieter as holidays approach. But Euro traders will look into confidence indicators to be released for the needed fuel for EUR/USD to head to 1.2555 resistance. Also, US consumer confidence will be a feature of the day.

Cleveland Fed President Loretta Mester she supports gradual rate hike “this year and next year”. At the same time, she’s “against a steep path” in tightening because “we want to give inflation time to move back to goal”. She sounds optimistic saying that “this year is shaping up to be another good year for the economy.” And for monetary policymakers, the task is to “calibrate policy to this healthy economy so that the expansion is sustained.”

The government’s tax cut poses “some upside risk” to the forecast, and Mester expects a better read on household spending “over the next several months”. Globally, she noted that “for the first time in many years, economic activity around the world is picking up and forecasts for global growth are being revised up.” And, “this should have a positive feedback effect on the U.S. economy via exports.”

Meanwhile, she warned that trade developments are a “risk to the forecasts”. And the uncertainty “may not be resolved quickly”. But it didn’t change her outlook for the over economy yet.

Goldman Sachs published a note that’s bullish on gold price yesterday and expected it to outperform over the coming months. It’s forecasting four Fed hikes this year, which is one more than FOMC’s own projection. And the bank admitted that its upbeat view on gold is “counter-intuitive”.

However, the report pointed to empirical data for the past six tightening cycles of Fed, and found gold has “outperformed post rate hikes four times”. And according to their analysts, “the dislocation between the gold prices and US rates is here to stay”. It added that the bullish view was also driven by higher inflation, rising EM wealth and increased risk of equity correction. Also, it’s a likely a function of investors “waiting on the sidelines” and the becoming interested in Gold again once the tightening “catalyst” has passed.

Here is our quick technical view on gold

German import price and Eurozone M3 money supply will be released in European session. But the focuses would be on confidence indicators including business claims, economic confidence, services confidence and industrial confidence.

Later in the day, US will release S&P Case-Shiller house price as well as Conference Board consumer confidence.

The break of 1.2445 resistance confirms resumption of rebound from 1.2154. Intraday bias stays on the upside for further rally to 1.2555 high, which is close to 1.2516 key long term fibonacci level. We’d be cautious on reversal from there. But decisive break will carry larger bullish implications. On the downside, below 1.2358 minor support will turn intraday bias neutral first. And further break of 1.2338 will target 1.2154 and below again.