Bitcoin climbs back above $7,000 even as stocks fall 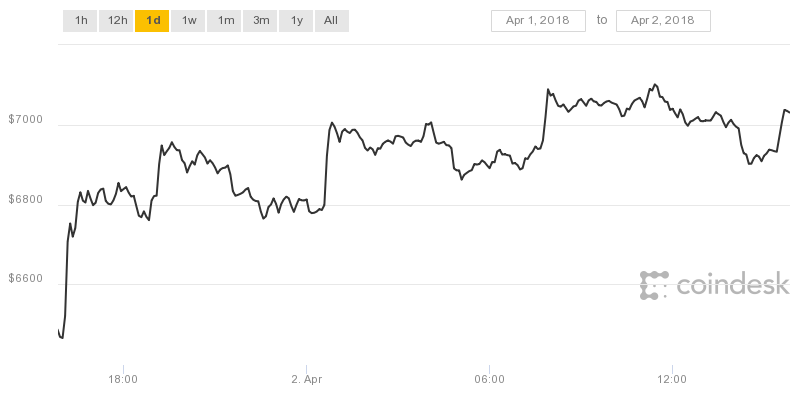 The digital currency gained more than $500 from Easter Sunday, according to data from CoinDesk. Bitcoin traded at $7,004 as of 12:56 p.m. ET Monday. It is still down more than 50 percent year to date.

Stocks meanwhile dropped on the first trading day of the quarter as Amazon put pressure on the broader tech sector. The Dow Jones Industrial Average fell more than 450 points, and the S&P 500 entered correction territory.

Cryptocurrency prices have taken a beating in 2018 after news of regulatory crackdowns, major hacks, tech companies banning advertising and investor uncertainty around the upcoming tax season.

Still, some investors are bullish about the year ahead.

Jack Tatar, co-author of “Cryptoassets: The Innovative Investor’s Guide to Bitcoin and Beyond,” said that while recent bans on cryptocurrency advertising by Facebook, Twitter and Google hurt prices short term, they could legitimize the space.

“Of course, I don’t like seeing bitcoin scrapping support below $8,000 but I do view some of this as growing pains for it and other cryptoassets,” Tatar said.

The digital currency dropped 12 percent in late January after Facebook, the world’s second-largest online ad provider, said it would ban all advertisements that promote cryptocurrencies to prevent the spread of what it called “financial products and services frequently associated with misleading or deceptive promotional practices.” Google announced a similar ban in in March, and Twitter followed suit last week.

In the life cycle of bitcoin, we’re in the teenage years, Tatar said. During these past few weeks of profit-taking, we’ve seen “the acne and out of control hormones that may symbolize those years.”

“People need to recognize that crypto is still young and like the internet, those early years can be ugly,” Tatar said. “I do hope that things stop getting thrown at bitcoin, but as most teens know, life comes fast and hard from all directions during the early years.”

Among those things coming at bitcoin, is regulation. South Korean, Japanese and U.S. authorities have announced increased scrutiny of cryptocurrency trading in the last few months.

Tax season may also be dampening prices, and some analysts have highlighted the potential for first-time investors to sell as they wake up to the fact that they owe capital gains on 2017’s cryptocurrency trading profits.

The total market capitalization of all cryptocurrencies tracked by CoinMarketCap has dropped by more than 58 percent this year. Bitcoin’s market cap meanwhile is down by 49 percent, according to CoinMarketCap.

“2017 was a big year, and so far this year we are seeing a correction to the prices,” said Nick Kirk, quantitative developer and data scientist at Cypher Capital, a cyrptocurrency trading firm. “I’m bullish for 2018 however.”

The cryptocurrency hit a high of near $20,000 in December, after starting the year below $1,000, according to CoinMarketCap.