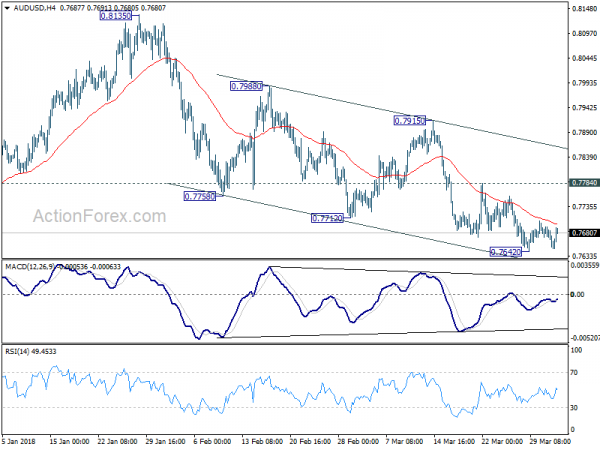 US equities suffered steep selling overnight with DOW losing -1.9%, S&P 500 losing -2.23%. NASDAQ was worst hit as tech rout continued and closed down -2.74%. While Asian equities opened lower and stay in red, selloff is relatively much milder. Nikkei hit as low as 21056.02 but at the time of writing, it’s down just -0.43% and is back pressing 21300 handle. Hong Kong HSI is also trading just down -0.7%. The reactions argues that the selloff is based on a US theme, not a global theme.

In the currency markets, Yen is trading as the strongest one for the week but it’s pared back much gain in Asian session. Yen, Dollar and Swiss Franc are broadly lower today. On the other hand, commodity currencies are staging broad based recovery, with Aussie leading Kiwi and Loonie higher. Technically, EUR/USD tried 1.2285 support again overnight but failed to sustain below. This level will remain a key focus for today.

Trump’s obsession with Bezos sent US stocks down


US President Donald Trump’s repeated attack on Amazon was cited as the main reason for the selloff in stocks, with fear of trade war with China in the background. The story isn’t going to end quickly as it’s reported by Vanity Fair, quoting sources close to the White House, that Trump is “obsessed” with Jeff Bezos, Amazon’s CEO. The obsession comes from Bezos’ ownership of the Washington Post, which adopts a firm anti-Trump stance. And Trump is considering ways to interfere on a single company. The actions could include forcing the Post Office to renegotiate the deal with Amazon, and, even cancel the pending multi-billon contract with Pentagon to provide cloud computing services.

Regarding US-China trade relationship, China started the tariffs on 128 US products yesterday. In an editorial in China Daily,  Wang Hailou, a researcher at the Chinese commerce ministry’s research center, said that “China does not like trade wars, but being on the side of justice, China has no choice but to enter a war to end a war.” The article also said that “It would be beneficial for all if (China’s) friendly overtures were accepted by Washington. However, at the moment it seems intent on turning a deaf ear to any suggestion that they each make concessions to reach an amicable agreement,”

It’s reported that the US and China are undergoing trade negotiations. But there is no news beyond that. And Trump would likely announce the list of products included in the Section 301 tariffs this week. It’s believed that the list will concentrate on those affected by intellectual property theft only. And a major portion would be cutting-edge technology products. This will be a major focus of the week, in addition to heavy weight data like non-farm payrolls.

RBA left cash rate unchanged at 1.50% as widely expected. The statement is mostly unchanged from the prior one. RBA maintained that conclusion that while “further progress in reducing unemployment and having inflation return to target is expected”, the “progress is likely to be gradual”. Regarding employment, RBA reiterated wage growth remained low even though it appears to have troughed Central forecast for CPI inflation is expected to be a bit above 2% in 2018. Thus, “holding the stance of monetary policy unchanged at this meeting would be consistent with sustainable growth in the economy and achieving the inflation target over time.”

Nonetheless, RBA mentioned the near term impacts from the trade policy of the US. It noted the increase in equity market volatility “partly because of concerns about the direction of international trade policy in the United States”. And, there has been “some tightening of conditions in US dollar short-term money markets” for reason other than fed funds rate. And such tightening has “flowed through to higher short-term interest rates in a few other countries, including Australia.”

Aussie was lifted earlier today but solid manufacturing data. The Australian Industry Group Australian Performance of Manufacturing Index rose sharply from 57.5 to 63.1 in March, hitting a record high. That broke previous record high at 62.1 recorded back in May 2002. In addition, March was the eighteenth straight month of “expanding or stable” condition, longest streak since 2005.

Intraday bias in AUD/USD stays neutral as it’s bounded in consolidation above 0.7642 temporary low. More sideway trading would be seen and stronger recovery cannot be ruled out. Still, near term outlook stays bearish as long as 0.7784 resistance holds, and further decline is expected. Break of 0.7642 will extend recent fall from 0.8135 to retest 0.7500 key support level. On the upside, however, break of 0.7784 will suggest near term reversal and turn bias to the upside for 0.7915 resistance first.