As Trump Seeks Attentions With Trade Tensions Escalation, Markets are Looking Forward to Non-Farm Payrolls Instead 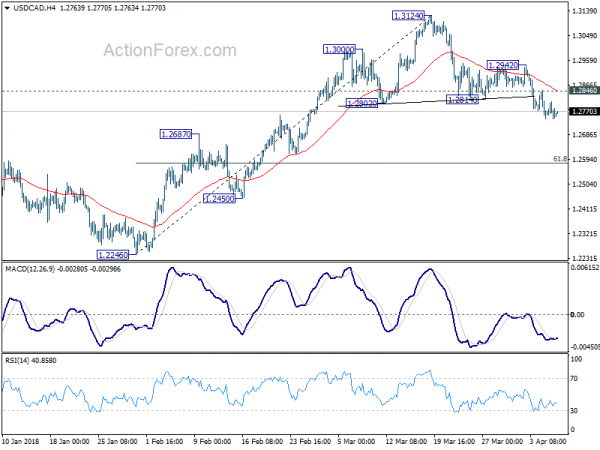 Trade war comes back to headline as US President Donald Trump announced his intention to triple down on the tariffs on Chinese imports. But so far, market reactions are muted. Major forex pairs are trapped in yesterday’s range, just with some notable weakness in New Zealand Dollar. Swiss Franc is so far the strongest for the say with Yen trading mixed. But as the range is tight so far, the picture of who’s stronger and who’s weaker can change easily. In the stock markets, Nikkei is trading nearly flat at the time of writing, after fluctuating between gain and loss most of the day. Hong Kong HSI is up 1.26%. Gold is hovering slightly below 1330 as recent sideway trading continues.

Reactions to trade war news has been somewhat delayed recently. We’ll have to, at least, wait for European open to gauge the response to Trump’s proposal. But for the day, there are still other issues to focus on. Non-farm payroll will remain an important piece of data. And Canadian employment will be closely watched too.

Trump shows his intention to escalate trade tensions with China


In a statement release after US market close, Trump reveal his intention to escalate trade tension and actions against China. He ordered the Trade Representative to consider tariffs on additional USD 100b in Chinese imports, in addition to the USD 50b list of 1300 product lines. In his own statement, Trump condemned China’s retaliation as “unfair” to “harm our farmers and manufacturers”. He also ordered the Secretary of Agriculture to “implement a plan to protect our farmers and agricultural interests”. USTR Robert Lighthizer supported Trump’s proposal and said it’s an “appropriate response” to China’s recent threat of new tariffs. The statements of Trump and Lighthizer could be found here.

Here are some reports that’s worth a read regarding US-China trade war:

Markets are expecting NFP to show 189k growth in March, down from February’s 313k. Unemployment rate is expected to drop further to 4.0%. Wage growth remains the key for Fed’s tightening path. Average hourly earnings are expected to grow 0.3% mom in March. Here is a summary of preceding job data. ADP private sector jobs grew a solid 241k. ISM manufacturing employment dropped to 57.3, down fro 59.7. ISM non-manufacturing employment rose to 56.6, up from 55.0. Conference board consumer confidence dropped to 127.7, down from 130.0. The data were solid even though they don’t point to that stellar 313k job growth in February. But 189k should be easy to achieve.

Here are some other NFP previews that’s worth a look:

Later in US session, non-farm payroll will be a major focus. Canadian employment data is equally important as markets expected 20k growth in March. Unemployment rate is expected to be unchanged at 5.8%. Canada will also release Ivey PMI.

USD/CAD’s downside momentum diminished a bit as seen in 4 hour MACD. But intraday bias stays on the downside for deeper fall. As noted before, near term trend should have reversed with head and shoulder top pattern (ls: 1.3000; h: 1.3124; rs: 1.2942). Decline from 1.3124 should target 61.8% retracement of 1.2246 to 1.3124 at 1.2581 next. Also, noted that current development suggest rejection by 1.3065 fibonacci level. And deeper decline could be seen back to 1.2246 and below eventually. On the upside, above 1.2846 minor resistance will turn bias neutral first. But break of 1.2942 is needed to confirm completion of the decline. Otherwise, outlook will stay cautiously bearish in case of recovery.