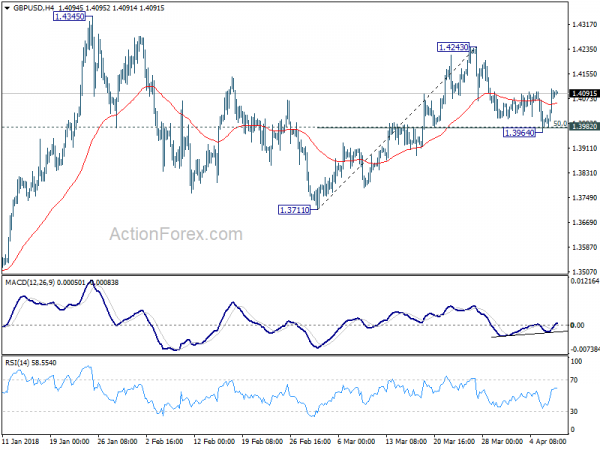 Asian markets open positively this week in spite of the sharp selloff in the US on Friday. At the time of writing, Nikkei is trading up 0.55%. China is back from holiday with SSE up 0.35%. Hong Kong HSI is also up 1.8%. The lack of risk aversion lifts Australian Dollar and New Zealand Dollar higher while Yen and Swiss Franc are broadly lower. Canadian Dollar is unaffected by rumor that the symbolic NAFTA deal might not be reached and is trading relatively firm. Dollar, on the other hand, stays mixed.

Fundamentally, FOMC minutes will be a key to watch this week. Even though traders were paring bets on Fed hikes after NFP, and on trade war worries, there are still firm expectations of another 25bps hike in June. Comments from Fed officials supported this expectation. Fed chair Jerome Powell sounded upbeat in his speech last Friday. Meanwhile, even known dove Chicago Fed Evans expressed his support for more tightening. But the picture could change if the US-China trade tensions evolve from words into actions. And with trade war concerns in the background, Chinese President Xi Jinping’s speech at that Boao economic forum will also be closely watched. And attention will also be on whether the symbolic NAFTA agreement would be delivered.

Technically, Sterling is a focus today. GBP/USD breached 1.4096 minor resistance on Friday which signals completion of pull back from 1.4243. Further buying is needed to be seen shortly to solidify this bullish case. GBP/JPY also breached 105.92 key resistance last week but quickly retreated back. At this point, we’re still expecting this resistance to hold to bring near term fall resumption soon. These two contradicting outlook should be realigned soon, one way or the other.

Fed chair Jerome Powell sounded upbeat in his speech on ” The Outlook for the U.S. Economy” last Friday. He acknowledged that “the labor market has been strong, and my colleagues and I on the Federal Open Market Committee (FOMC) expect it to remain strong.” And, inflation is expected to ” move up in coming months and to stabilize around 2 percent over the medium term.” Powell also pointed to others signs of strengthen including “steady income gains, rising household wealth, and elevated consumer confidence”. Powell also noted that the connection between unemployment rate has inflation has “clearly weakened” over the past couple of decades. But he emphasized that the connection “still persists”. And “it continues to be meaningful for monetary policy.”

Regarding monetary policy, Powell said that “as long as the economy continues broadly on its current path, further gradual increases in the federal funds rate will best promote these goals” of price stability and full employment. He repeated what others have said that ” raising rates too slowly would make it necessary for monetary policy to tighten abruptly down the road, which could jeopardize the economic expansion.” On the other hand, “raising rates too quickly would increase the risk that inflation would remain persistently below our 2 percent objective.” And Fed’s gradual path is aiming at balancing these two risks.

Regarding recent tensions between Trump and China on trade, Powell noted that “the discussion about trade is at a relatively early stage”. And, “people really don’t see yet any impact for the near-term outlook.” However, he did note that business leaders have already expressed their concerns to Fed officials that “changes in trade policy have become a risk to the medium-term outlook.”

Minneapolis Fed President Neel Kashkari urged fed policy makers “should all be paying attention” to the escalation in trade tension between Trump and China. For now, “it’s too soon for any of us to judge” and “none of us knows how to weigh the probability of these different outcomes.” And, “how that washes out in overall inflation I think is hard to judge.”

He said the impact to the economy is unknown for the moment as “this could be a lot of chest pounding”. Or, “it could lead to a trade war.” The end results, even something in the middle as usual during negotiations, could prompt business and investors to “pull back” and that could impact economic growth. Also, “the impact on Main Street is going to be seen over the long term.”

Kashkari also noted that “uncertainty I think is scaring people a little bit.”

Chicago Fed Charles Evans, a clearly known dove, expressed his optimism that inflation will hit 2% target and support for gradual rate hike on Saturday. He pointed to fiscal policy that “has been much more supportive of further growth”. Hence, “the need for accommodative monetary policy is less than it was before.” And, now, given the “very strong” national economy and labor market, he would be surprised is inflation couldn’t meet target. Evans added, “continuing our slow, gradual increases will be appropriate to get us to the point where monetary policy isn’t really providing more lift to the economy.”

Chinese President Xi Jinping’s speech at the Boao Forum for Asia on Tuesday will be a key focus this week. Xi has so far been quiet regarding the trade tensions with US President Donald Trump. There are expectations for Xi to make use of the occasion to push back and defend. Or, Xi could say something consistent with China’s theme of blaming US for unilaterialism and protectionism,

However, Xi’s leadership and communication style is clearly very different from Trump’s. And it’s, to us, unlikely for Xi to suddenly change his style to adopt a confrontational way like Trump. That is, the way that Trump tripled down on the tariff proposals to USD 150b immediately after Chinese response. Nor would Xi adopt a way like Trump, who could say “President Xi and I will always be friends” right after raising the threat to China. We’ve never heard Xi saying that Trump is his friend (have you?). It’s more likely for Xi to just reiterate the push for globalization, compliance with then WTO and its own commitment in opening up the markets. Xi, as self-envisaged emperor, will just let his officials do the barking.

Talking about the Boao Forum, there is one interesting point to note. On Sunday, head of the Institute of World Economics and Politics at the Chinese Academy of Social Sciences Zhang Yuyan said there is no intention of allowing trade dispute with the US to spill over to finance. Zhang emphasized that there should be a “firewall between trade problems and financial ones”. And, the chance of China selling its massive US Treasury holdings due to a trade war is “very small”.

Zhang added that “maybe one or two days before the actual implementation (of the tariffs), the US side will gain its reason and sense.” And, “there are many cases of compromises being reached at the last minute.”

North Korea ready to discuss denuclearization with US

It’s reported that North Korea is ready to discuss denuclearization with the US, and thus, increasing the chance of meeting between it’s leader Kim Jong-un and US president Donald Trump in May. Financial Times quoted and unnamed National Security Council spokesperson saying that “I confirm that the United States and North Korea have been holding talks in preparation for a summit, and that North Korea has confirmed its willingness to talk about denuclearization.” Reuters also quoted an unnamed official saying “the U.S. has confirmed that Kim Jong-un is willing to discuss the denuclearization of the Korean Peninsula‎.”

Separately, China’s Ministry of Commerce announced it’s banned exports to North Korea with potential dual use in weapons of mass destruction. Details on 32 materials banned were released by the MOFCOM, including technologies and forms of equipment, including particle accelerators and centrifuges.

Reuters reported that Trump’s push for some form of NAFTA “agreement” before the Summit of the Americas in Lima could fail. It’s widely rumored that Trump would at least want to have something “symbolic” to sign this week. But there are still many fundamental differences between the US with its NAFTA partners Canada and Mexico. A source was quoted saying that even a symbolic agreement needs to contain “everything defined in black and white” and key issues could not be left open for negotiation afterwards. The source noted that a deal could be possible by the end of April or early May if discussions keep advancing.

It should be noted that CAD has been strongest one this month mainly due to optimism that a certain form of NAFTA agreement could be delivered at the Summit of the Americas on April 13-14, or before. There is firstly, risk of sell-on-news, if the agreement is delivered. There is now secondly, risk of selloff on disappointment that it’s not delivered. So, CAD traders, beware.

Looking ahead, there will be some important events from the US this week. CPI will be a key feature and will be watched by Fed officials and the markets closely. FOMC minutes will also be watched. But based on recent comments from Fed officials, the minutes will likely reaffirm Fed’s stance on gradual tightening and the expectation on a total of three hikes this year. ECB will also release monetary policy meeting accounts too. Other than that, UK productions, China CPI an trade balance will also catch some attentions.