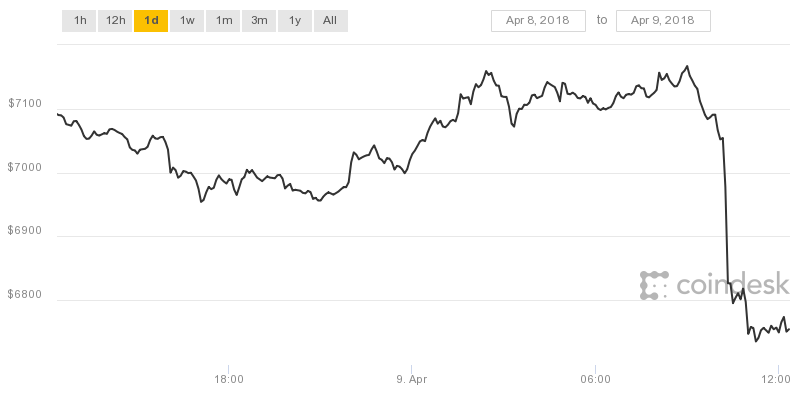 Bitcoin dropped more than 6 percent over two hours Monday, below $7,000 as the April tax-filing deadline approaches.

The cryptocurrency hit a low of $6,646.07 as of 3:49 p.m. ET Monday, according to data from CoinDesk. Bitcoin prices have fallen more than 27 percent over the past month.

Tax-related selling has been a key driver of this month’s sell-off, according to some analysts.

Bitcoin prices are down more than 52 percent this year, after kicking off 2018 above $14,000, according to CoinDesk. The entire cryptocurrency market has lost more than half its market capitalization since the beginning of this year, according to data from Coinmarketcap.

Regulatory uncertainty has been another factor in the pricing pressure.

Bitcoin began falling below $10,000 in March after the SEC announced that online platforms trading digital assets that are considered securities need to register with the agency.

The SEC has also cracked down on a fundraising technique known as initial coin offerings. Last week, the SEC charged two founders of a cryptocurrency firm endorsed by boxer Floyd Mayweather with carrying out a fraudulent ICO.

Global regulators are split on how to police the cryptocurrency, which is not backed by a central bank.

The Reserve Bank of India announced last week that regulated financial institutions in India can no longer legally deal with cryptocurrencies.

Ari Paul, CIO and managing partner of cryptocurrency investment firm BlockTower Capital, said the market is in price-discovery mode until investors get more clarity on regulation.

“We’re in a bear market until new buyers are enticed,” Paul said, adding that institutions are delaying putting money into the market until investment vehicles like ETFs get approved.