Euro to Look into ECB Minutes for Guidance, Markets Steady in Asia 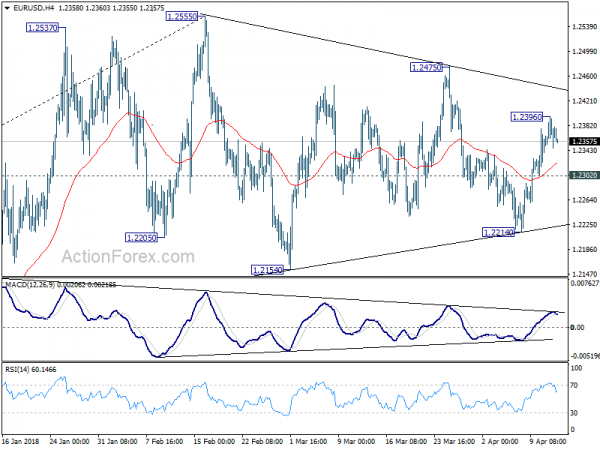 The Asian markets are relatively steady today as for now, there is no escalation in the situation in Syria. At the time of writing Nikkei is trading down -0.26% only while HK HSI is down -0.17%. Performance of US indices overnight were not too bad. DOW closed down 0.9% at 24189.45 as there was no follow through selling below 24200 handle. In other markets, Syria tension continued to boost oil price with WTI breaching 67 handle, hitting the highest level since 2014. Gold also attempted to rally, hitting as high as 1365.24 but failed to push through 1366.95 resistance. Gold is back below 1350 at the time of writing, settling back into established range.

In the currency markets, Dollar is recovering broadly today, digesting recent loss. March FOMC minutes were seen as hawkish, yet they’re not more hawkish than expected. Fed fund futures continued to price in over 95% chance of a June hike. But there is little support to the greenback. Dollar remains the second weakest one for the week, following Japanese Yen. Elsewhere in the currency markets are rather quite today. Focus will now turn to ECB monetary policy meeting accounts to be released in European session.

ECB minutes as the focus of today


Euro was shot up earlier this week by comments from outspoken ECB Governing Council member Ewald Nowotny. He firstly said the EUR 30b per month asset purchase could ended this year. Secondly, he called on ECB to start the process of raising interest rates. He noted he had no problem with moving deposit rate from -0.4% to 0.2% as first step. However, ECB was quick to clarify as a spokesman said Nowotny’s view didn’t represent the central banks. And Euro’s rally lost steam since then.

For the March ECB meeting accounts, the markets would, as usual, like to know more on the central bank’s plans on altering its language and forward guidance. Also, questions will remain on whether ECB would stop the asset purchase program after September, or it would taper it. In addition, while it’s still admittedly still early, the markets would like to know if there is any discussion about raising interest rates, just as what Nowotny said.

Dollar gets no support from hawkish FOMC minutes

The minutes of the March FOMC meeting revealed nothing surprising. Almost all policymakers supported a rate hike even though there were a couple of them pointed to benefits of waiting a bit longer. All policymakers expected inflation to rise in the coming months, showing receding worry on the inflation outlook. Nonetheless, the pick-up in inflation is not enough to alter the projected rate path yet. Regarding the economy, it’s a consensus view that outlook has strengthened in recent month. Meanwhile, a strong majority of the members viewed escalation in trade tension and retaliation by other countries as downside risks for the economy. The minutes are seen as hawkish in general, but not more hawkish than expected.

High-level NAFTA negotiation talks will resume this week on the sidelines of the Summit of the Americas in Lima, Peru this weekend. U.S. Trade Representative Robert Lighthizer will be present in the occasion even though President Donald Trump cancelled is trip. Canadian Foreign Minister Chrystia Freeland and Mexican Economy Minister Ildefonso Guajardo will be there too.

It’s believed that Trump is still seeking to close the NAFTA deal quickly and offered a concession regarding car contents. The timing is important as securing the deal by May should meet all the necessary deadlines to have the revised NAFTA agreement approved by Republican-controlled Congress, before mid-term elections. Another key milestone is Mexican elections on July 1.

BoJ Governor Haruhiko Kuroda spoke at a branch manager meeting today. He expressed the an upbeat view on inflation. Kuroda noted improving output gap as well as heightening medium- to long-term inflation expectations. Thus, He expected “inflation accelerate as a trend and head toward 2 percent.” Also, “Japan’s economy is expected to continue expanding moderately”. Nonetheless, Kuroda maintained that the ultra loose monetary policy needs to be maintained “until needed to stably and sustainably achieve” its target.

RBNZ McDermott: Entering into next stag of evolution

RBNZ Assistant Governor and Head of Economics John McDermott discussed “evolution in inflation targeting” in a speech delivered to the RBA conference on central bank frameworks in Sydney today. He noted that the New Zealand “framework has changed significantly over thirty years, reflecting lessons learned and the changing economic and political environment” And, the central bank is ” about to enter the next stage of that evolution.”

A key recent change to RBNZ’s framework is duel mandates of inflation and employment. The exact wordings to be put on the Reserve Bank Act are not finalized yet. But putting a qualitative target like “maximum sustainable employment” would be a better choice rather than a numerical target. He pointed out that “focusing too narrowly on one indicator, such as the unemployment rate, can be misleading. For example, a fall in the unemployment rate could be the result of an increased demand for labour – typically reflecting a strong economy – or the result of people dropping out of the labour force altogether because they are unable to find a job and have become discouraged.”

Overall outlook of EAP was supported by “prospects for a continued broad-based global recovery and robust domestic demand”. However, faster than expected monetary policy tightening in advanced economies and threat of escalation in trade tensions posted some risks to the region.

The World Bank urged that “to address risks to macroeconomic stability, countries will need to consider tightening monetary policies and further strengthening macroprudential regulations.” Also, “improving competitiveness will also be important for countries in the region as they seek to adjust to the ongoing changes in the manufacturing landscape with the evolution of technology.”

IMF Managing Director Christine Lagarde talked about China’s “One Belt, One Road” initiative at a conference in Beijing today. She acknowledged the potential of the initiative as a “platform for international cooperation” and there were already “signs of progress”. Nonetheless, Lagarde also warned of two challenges.

Firstly, she urged that Belt and Road “Only travels where it is needed”. She pointed to global experience of “failed projects” and “misuse of funds”. Also, Chinese and other companies involved in construction overseas may face “new political, legal, and environmental obstacles”. Secondly, she warned that the Belt and Road ventures can “problematic increase in debt”. And that could potentially limit other spending as debt service rises and create “balance of payment challenges”.