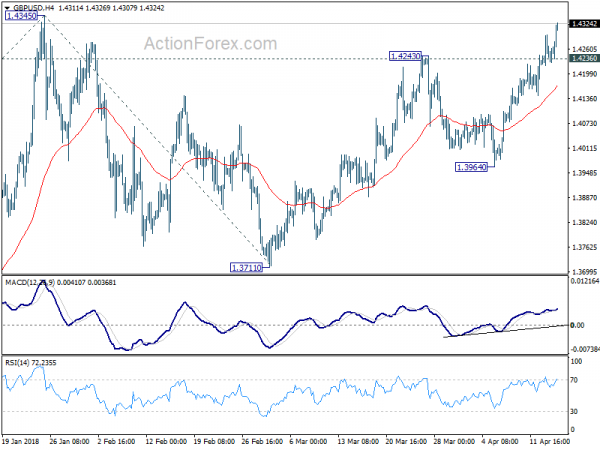 Dollar remains general weak in early US session after mixed economic data, in particular against European majors. The greenback does try to rebound against Australian Dollar and Canadian Dollar. But momentum is being capped. Yen also tried to rebound earlier today but quickly lost steam. Sterling is emerging as the strongest on today, without any special reason. Traders could be jumping the gun ahead of a string of important UK data, including CPI and employment, including wage growth, to be featured later in the week. These data would be important by BoE policymakers to decide whether to hike again in May.

In other markets, investors are quick to leave the Syria strike behind. Nikkei closed the up 0.26%. Hong Kong HSI closed down -1.60% but that was mainly due to worry on weakness of its currency. European indices are mixed with DAX and CAC flat at the time of writing. FTSE is down -0.45% thanks to strength in the Pound. US futures point to slightly higher open. Gold remains bounded in tight range between 1340/50.

US headline retail sales rose 0.6% mom in March, above expectation of 0.5%. Ex-auto sales rose 0.2% mom, in-line with consensus. Empire State Manufacturing index, however, tumbled sharply to 15.8 in April, down from 22.5 and missed expectation of 18.6. In particular, the index for future business conditions dived -26 pts to 18.3, hitting the lowest level in more than two years. That’s a sharp contrast to the reading back in February, at 44.1, which was a several year high.

Minneapolis Fed Kashkari: Fed might be one hike away from achieving neutral

Minneapolis Fed President Neel Kashkari is seen clearly as a dove as he voted against al three of Fed’s rate hikes last year. He said in a WSJ interview published today that fiscal stimulus ofthe federal government, including tax cuts would make Fed meeting its 2%inflation target more likely. The tax cuts and spending increases are”macroeconomically significant, and they are big enough to have aneffect on the trajectory of the economy… that could change things in ameaningful way.” And with that development, Fed can move ahead with theplanned tightening.

But he also argued that “it isn’t going to be obvious to me once weachieve our inflation target that we need to now put the brakes on theeconomy.” He reiterated his stance that ” once we achieve our inflationtarget, we should try to get to neutral in a reasonable period of time.” And he added that “we might be one hike away from achieving neutral.”

BoJ Deputy Governor Masazumi Wakatabe urged patience in maintainingultra loose monetary policy. He repeated that “inflation has yet toreach our 2 percent target” even though price growth is on an “upwardtrend”. And by “patiently maintaining our current policy”, BoJ could”heighten inflation expectations”.

Waktatabe is not concerned with falling behind the curve as “even iffor some reason inflation accelerates rapidly, we have the tools to dealwith it.” Though, he noted that “the merits and demerits of the BOJ’s monetarypolicy change over time.” And he added that BoJ needs to be “mindful ofthe danger, or risk, a prolonged low-interest rate environment wouldweigh on bank profits and that such impact could accumulate.”

Separately, the Japan Cabinet Office maintained the assessment that the economy is “recovering at a moderate pace”.