Bitcoin ‘miners’ are losing money at any price below $8,600: Morgan Stanley 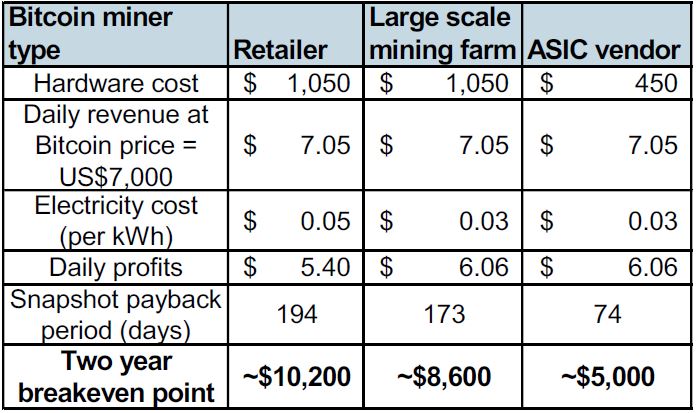 Bitcoin traded slightly higher near $8,200 on Thursday, according to CoinDesk. It has struggled to recover in the last few months after tumbling from a record high above $19,000 in mid-December.

“We estimate the break-even point for big mining pools should be US$8,600, even if we assume a very low electricity cost (US$0.03 kW/h),” equity analyst Charlie Chan and his team said in a Thursday note.

Bitcoin “mining” uses high computing power to solve a complex mathematical equation, proving an anonymous miner used the process the network agreed upon to build the blockchain’s record of transactions. Miners then get bitcoin in reward for successfully completing the equation.

Large groups of miners, mostly in China, work together in “pools” to improve efficiency. But as more miners participate, the difficulty of the process increases.

“We think the injection of new mining capacity will further increase the mining difficulty in 2H18,” the Morgan Stanley analysts said. “Even if the Bitcoin price stays the same in 2H18, we believe mining profits would drop rapidly, according to our simulation.”

Companies that sell the specialized mining chips may have more leeway. The Morgan Stanley model estimates an application-specific integrated circuit, or asic, vendor would break even over two years if bitcoin traded near $5,000.”