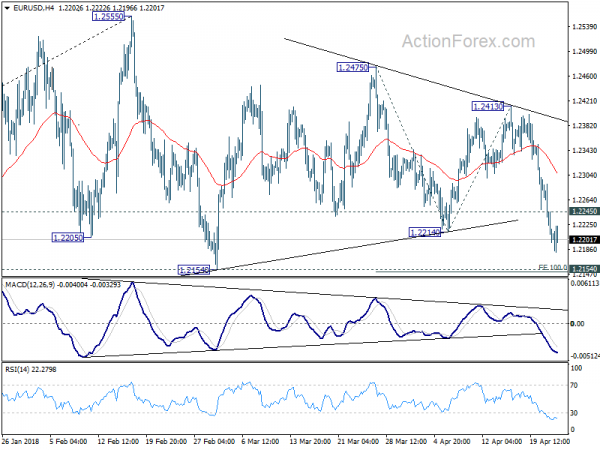 Dollar engages in consolidative trading today as markets digest recent sharp gains. Also, as pointed out before, 10 year yield should a sign of hesitation ahead of 3%, and it might take a bit more time to overcome this level. While housing data is a focus in the US today, consumer confidence is a piece of data that could help dollar extend its rally. Elsewhere in the currency markets, weaker than expected German Ifo confidence provide little support for Euro’s rebound. New Zealand dollar remains the weakest, followed by Yen. Sterling is leading others high, followed by Aussie and Canadian Dollar. The Loonie could have a little more upside on oil price. Brent oil breached 75 level for the first time since 2014 today. And WTI is trying to reclaim 69.

German Ifo business climate dropped to 102.1 in April, below expectation of 102.8. Expectations dropped to 98.7, below consensus of 99.5. Current assessment also dropped to 105.7, below expectation of 106.5. Ifo President Clemens Fuest commented that “high spirits among German businesses have evaporated,” and, “the German economy is slowing down.” Ifo economist Klaus Wohlrabe noted that the 5th drop in a row in the Ifo reading is merely a sign of normalization, and Germany is far from a recession. GDP growth is seen as slowed to 0.4% in Q1 versus Q4’s 0.6%.

Separately, Bank of France Governor, ECB Governing Council member Francois Villeroy de Galhau warned that “we are all aware that an escalation of protectionist threats from the United States would dampen growth everywhere.” And, he urged “Europeans, shoulder-to-shoulder with Canada, Japan and others, must resolutely defend international economic relations based on commonly respected rules and multilateral institutions.”

Japan Economy Minister Motegi: We’re not thinking of signing a bilateral FTA with US

Japan’s Economy Minister Toshimitsu Motegi said today that trade discussion with US Trade Representative Robert Lighthizer will begin around mid-June or later. There was an agreement between Japan Prime Minister Shinzo Abe and US President Donald Trump on setting up a new framework focusing on bilateral trade. But Motegi reiterated today that “we’re not thinking of signing a bilateral FTA.”

It’s believed that Japan’s priority is on TPP, the pact that it leads with 10 other nations. And Abe’s cabinet would want to pass relevant legislations through the parliament within the current session which ends on June 20. In addition, Japan has been clear that it opposes to a two way trade deal. On the other hand, Trump and Treasury Secretary Steven Mnuchin showed no respect to Japan’s preference and persistently tried to force bilateral trade agreement on Japan.

Australia CPI was unchanged at 1.9% yoy in Q1, below expectation of 2.0%. RBA trimmed mean CPI rose to 1.9% yoy, up from 1.8% yoy and beat expectation of 1.8% yoy. RBA weighted median CPI was unchanged at 2.0% yoy, beat expectation of 1.9% yoy. The Australian Bureau of Statistics noted in the release that “while the annual CPI rose 1.9 per cent, most East Coast cities have continued to experience annual inflation above 2.0 per cent, due in part to the strength in prices related to Housing and Food. Softer economic conditions in Darwin and Perth have resulted in annual inflation remaining subdued at 1.1 and 0.9 per cent respectively.”

AUD/USD spiked lower to 0.7576 after the release but quickly recovered. Firstly, the decline is a bit stretched after AUD/USD fell for three days. Secondly, the CPI data just affirmed the case that RBA is in no rush to raise interest rate.