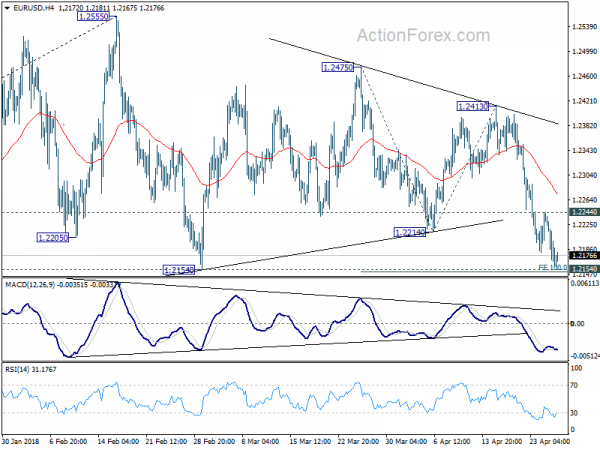 Dollar retreats mildly in Asian session today but remains the strongest one for the week. US 10 year yield finally took out 3% level overnight with some conviction. TNX hit as high as 3.035 before closing at 3.024, up 0.041. The development helped lifted Dollar Index above key near term resistance at 91.01 to close at 91.17. The stage is set for Dollar to reverse its medium term down trend. Though, the greenback still have one more hurdle to overcome. That is, 1.2154 support in EUR/USD. That would very much depends on today’s ECB rate decision and press conference, as well as US Q1 GDP data tomorrow.

There is little chance of any change in monetary policy nor language in today’s ECB rate decision and press conference. President Mario Draghi will most likely continue to sound cautious and noncommittal. Expectations are indeed on the June meeting where ECB will release new economic projections, and will likely signal what it’s going to do after asset purchase program expires in September.

Nonetheless, today’s meet may not be a non-event. Since the March meeting, Eurozone’s economic data have surprised to the downside. It would be of great interest to see the policymakers’ interpretation of the situation. All in all, we expect the members to view the first quarter slowdown as driven by temporary factors, e. g.: weather, which do not affect the monetary stance. More in ECB Preview: Caution over Recent Slowdown Won’t Affect QE Schedule

And some suggested readings on ECB:

Moody’s Investor Service affirmed US Aaa rating. Outlook was also maintained as stable. Moody’s noted that “exceptional economic strength” of the US, very high strength of its institution, very low exposure to credit related-shocks. And that “counter balance” the lower fiscal strength.

The rating agency also noted that “diversity, dynamism, and competitiveness” of the US economy, Dollar’s status as the “pre-eminent international reserve currency” and the “very large size and depth” of the treasury market. These advantages will “offset rising fiscal pressures” from “ageing-related entitlement spending, higher debt service payments”, and recent policy actions that will likely lower revenues and increase expenditures.

For now, Moody’s expected US and China to reach a trade deal eventually. However, Moody’s Senior Credit Officer William Foster said that “if things ultimately progress in a way that is outside of the base case, that would be negative for both countries and for the global market place, but our expectation is this will be negotiated back from the headlines you’re reading.”

Canada Freeland: “Good” and “constructive” progress made in NAFTA talks

Freeland hailed yesterday that “there is a very strong, very committed, good-faith effort for all three parties to work 24/7 on this and to try and reach an agreement.” And, some “good” and “constructive” progress was made. They are working on “a set of “proposals based on the creative ideas the U.S. came up with in March”.

But there are still some major differences. For example, Canada is firm on it’s stance that object the including of a “sunset clause” what would allow one of the three members to quit after five years. Freeland said that the withdrawal mechanism is “absolutely unnecessary”.

Also Freeland reiterated Canada’s opposition to US steel and aluminum tariffs, which is currently exempted until May 1. She said “Canada’s position has been clear from the outset and that is that Canada expects to have a full and permanent exemption from any quotas or tariffs.”

Fitch expected Japan GDP growth to slow to 1.3% in 2018 and 0.7% in 2019. However, “trade protectionism poses a downside risk to the outlook, exemplified by the imposition of a 25% tariff on US imports of steel and aluminium, including from Japan.” Also, “spillovers from trade tensions between the US and China are also a risk, as are tensions on the Korean peninsula.” Regarding inflation, Fitch projected headline inflation to reach only 1.2% at the end of 2018, and rise temporarily to 2.8% at the end of 2019 due to sales tax hike.

The monetary settings under BoJ’s yield curve control framework will “remain broadly unchanged for the foreseeable future”. Fitch noted recent slowdown in asset purchase has been sufficient to sustain the share of outstanding JGBs held by the central bank at around 40%-45%. And, “this level of BoJ ownership is within levels that would prevent the emergence of problems for JGB market liquidity, which the BoJ continues to monitor closely.”

South Korean President Moon Jae-in will meet with North Korean leader Kim Jong-un in a historical encounter tomorrow on Friday. That’s the first highest level summit between the two countries for in more than a decade.

According South Korean chief of staff, the meeting will start at 10:30 a.m. (0130 GMT) at the Peace House in Panmunjom, a village just north of the de facto border between North and South Korea. Kim will then cross the border at 9:30 a.m. (0030 GMT). Moon and Kim will then have lunch separately before holding a tree-planting ceremony in the afternoon.

In the ceremony, a pine tree will be planted on the demarcation line, as a symbol of “peace and prosperity”. Soil from Mount Paektu in North Korea and Mount Halla in South Korea will be used. Also, the tree with be watered with water brought from the Taedong River in the North and the Han River in the South.

A second round of talk will then be held after a walk in Panmunjom. A pact will then be signed by Kim and Moon, with an announcement. And the encounter will conclude with dinner on the South’s side and watch a video clip themed ‘Spring of One’.

EUR/USD dropped to as low as 1.2159 so far and focus is now on 1.2154 key support. Decisive break there should confirm the bearish case of medium term reversal. In addition, the break of 100% projection of 1.2475 to 1.2214 from 1.2413 will indicate downside acceleration. In that case, EUR/USD should target 161.8% projection at 1.1991 next. In case of recovery, outlook will remain bearish as long as 1.2244 minor resistance holds. And further decline is still expected. However, break of 1.2244 will indicate strong support from 1.2154 and turn intraday bias back to the upside for 1.2413, to extend recent range trading.