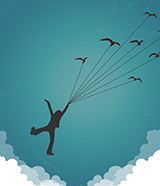 After years of struggle, Asia’s equity-linked market is back with a roar.

So far this year, the 40 or so deals priced in the region (excluding Japan and onshore China) have raised a total of $9.7 billion, marking a dramatic increase from a year ago when issuers did 22 deals and raised $1.5 billion, according to Dealogic.

“The boom in equity-linked issuance is long overdue,” says Jennifer Choi, an equity-linked origination banker at Credit Suisse. “The market is finally catching up because of rising rates and the outperformance of share prices.”

Another big catalyst for convertible bonds this year has been the return of China’s property developers, according to Nathan McMurtray, CLSA’s head of equity-linked products. They were the single biggest source of issues before the financial crisis struck in 2008, but have been largely absent over the last decade because of the availability of other, cheaper sources of debt.

Three-year dollar swap rates have climbed about 80 basis points recently, dealing a direct hit to coupon rates on straight bonds, which tend to widen by the same amount. The equity option on equity-linked bonds, however, makes them less sensitive to rate increases.

Equity-linked bankers also have a wobbly bond market to thank for the spike in volumes. As volatility in the region’s high-yield sector goes from bad to worse, issuers are becoming more willing to issue hybrid debt, bankers say.

That momentum is not expected to slow down any time soon. “This year could be a record for Asian equity-linked issuance since the financial crisis,” McMurtray says. “We expect to see a deepening issuer pool with repeat and new issuers, as well as diversity from across the region.”

A head of convertible origination says there are two or three large Chinese property developers interested in raising funds in the next few months, as well as three from southeast Asia. Chinese state-owned enterprises are lining up trades, with four or so of them considering raising between $500 million and $1 billion apiece. Private enterprises are also keen to tap the market, Choi adds.

“We continue to see strong momentum this year in inbound enquiries from corporates looking to issue convertibles,” she says. “There is interest from issuers all across Asia to diversify their funding sources to include convertibles, as they are sold to a unique investor base with little overlap with credit investors.”

January was a big month for Asia, with about $7.3 billion in equity-linked transactions priced. But this glut of new issues has led to some indigestion among investors, several bankers say. New issue premiums have widened since January, with bankers citing Angang Steel and Zhongsheng Group Holdings as examples.

Angang bagged HK$1.9 billion ($235.7 million) from its debut convertible in May. Had it launched in January, though, the company could have tightened its conversion premium by at least 10bp, says a banker away from the deal.

“Two years ago, a trade like Angang with such thin stock borrow would have had no takers, but this was multiple times oversubscribed,” he adds. Bankers also point to Zhongsheng’s HK$4 billion convertible bond that also priced in May as evidence of how the market has swung since the start of the year. Sole global coordinator JPMorgan is understood to have opened books for Zhongsheng with a conversion premium of between 35% and 40%, but ended up pricing the five-year put three at 27.5%, according to two equity-linked bankers not on the trade. JPMorgan did not respond to a request for comment.

“It’s quite rare for a convertible in Asia to price worse than the marketing range,” a banker away from the transaction says. “There was perhaps some misreading of the market, as investor appetite has changed markedly since issuers got away with pretty aggressive terms at the beginning of the year. In this environment it is important to constantly test your assumptions.”

Nonetheless, a head of convertible origination says investors remain open to new deals. Despite some fatigue in the Chinese property sector, with about $8 billion of trades done this year, the right names can still get done, he says.

“The size of new issue premiums will be issuer-specific,” he says. “If you’re a well-defined credit with a clear volatility story and stock borrow, then it should be no trouble.”