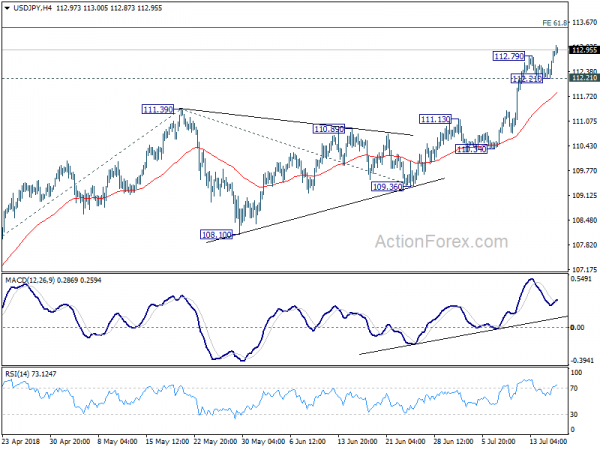 Dollar is staying firm in Asian session today after overnight rally. Markets received Fed Chair Jerome Powell’s composed and balance testimony rather well. And he basically affirmed that Fed in on track for its projected rate path. In particular, USD/JPY has already resumed recent rise and breaches 113 handle. The dip in USD/CHF yesterday was deeper than we expected. But subsequent rebound put the pair back in bullish shape. While the greenback is still trading in red against Swiss Franc and New Zealand Dollar, it could regain the control soon. On the other hand, Sterling is trying to recover today but stays as the weakest one for the week on Brexit uncertainties. The votes on the trade bill and customs bill in the parliament this week showed Prime Minister Theresa May is facing an increasingly divided UK on Brexit, rather than a unifying one.

Technically, EUR/GBP’s breach of 0.8901 resistance suggests that recent rally from 0.8620 is resuming, but with rather weak momentum again. GBP/JPY is back pressing 147.63 minor support and a firm break there will indicate near term reversal. GBP/USD, with yesterday’s dive, is set to take on 1.3048 low. For Dollar, a focus in on 1.3216 resistance in USD/CAD. Break there will resume last week’s rebound from 1.3063 for 1.3385.

In Fed chair Jerome Powell’s Congressional Testimony overnight, he painted an optimistic picture of the US economy. He noted that “with appropriate monetary policy, the job market will remain strong and inflation will stay near 2 percent over the next several years.” And, “risk of the economy unexpectedly weakening as roughly balanced with the possibility of the economy growing faster than we currently anticipate.” He also affirmed the known policy path and said “the best way forward is to keep gradually raising the federal funds rate.”

Regarding US trade policy, Powell didn’t comment directly as expected. It should be reminded that Powell has already made his stance clear before. He doesn’t comment on policies he doesn’t make. And to guard the line of independence of Fed, he has to refrain from commenting on the administration’s policies too. Instead, he takes them as given. Though, he was willing to talk about trade from “principles” perspective. And to him, countries that embraced free trade and low tariffs used to have better results and higher productivity. Countries that have been more protectionist “have done worse”.

Kansas City Fed President Esther George “Threading the Needle” that the US economy is in “excellent” shape and “appears to be firing on all cylinders”. Her baseline outlook is for the expansion to “continue at a moderate pace”. And monetary policy “will need to move from an accommodative stance to a more neutral stance”. But future policy actions will “increasingly need to be data dependent.”

But there is “considerable uncertainty” on where the “neutral policy rate” is. “Various structure changes” suggested the neutral rate is “lower” than in the past. But “cyclical factors” could have partially offsetting that while “fiscal stimulus” is like raising the neutral rate. Likewise, the natural rate of unemployment is uncertain too and “monetary policy is currently testing the limits of how low unemployment can go without causing an undesirable increase in inflation.”

Risks to the outlook “appear balanced” but George emphasized that both upside and downside risks are “significant”. The “predominant upside risks” are “pro-cyclical U.S. fiscal policy and globally accommodative monetary policies.” The government’s tax cuts and increased spending during a “business cycle expansion … may have the short-run benefit of promoting spending and, perhaps, increasing the economy’s longer-run growth potential”. But, “they also carry a risk of pushing the economy beyond its productive capacity.”

The “predominant downside risks come from uncertainty around trade policy.” She hasn’t incorporate any significant effect into her outlook yet. But anecdotal reports from our business contacts suggest that some companies are taking a “wait and see” approach to new capital spending due to uncertainty about future trade policies.” And, “whether this will materially slow the economy over the next couple of years or threaten the sustainability of the expansion is something that I will be monitoring carefully.

Sterling dropped sharply overnight after Prime Minister Theresa May suffered unexpected defeat on one amendment on the Brexit Trade Bill in the parliament. That amendment requires the government to take “all necessary steps” to join the European medicines regulatory framework. The Pound the stabilized after May narrowly defended the main amendment to the trade bill by 307 to 301 votes. That amended required the government to negotiate a customs union arrangement with EU if by January 21, 2019, it failed to negotiate a deal of frictionless trade for goods.

Sterling is holding above 1.3048 against Dollar for the moment while EUR/GBP’s breach of 0.8901 was, so far, weak. At least for now, May’s position is still safe and she’s avoided a confidence vote. Nevertheless, the tight voting of Monday and Tuesday showed how divided the pro- and anti-EU camps are and it’s like an impossible task to bridge between them. A confidence vote on May could happen any time should she slip. And, the pound would probably stay as weak as May despite the anticipated BoE tightening in August.

Australia Westpac leading index rose 0.0% mom in June. UK inflation data will be the main focus today. Headline CPI is expected to accelerate back to 2.6% yoy in June. Core CPI is expected to climb to 2.2% yoy. RPI, PPI and house price index will also be released. Eurozone will release June CPI final. US will release housing starts and building permits, as well as Fed’s Beige Book report.