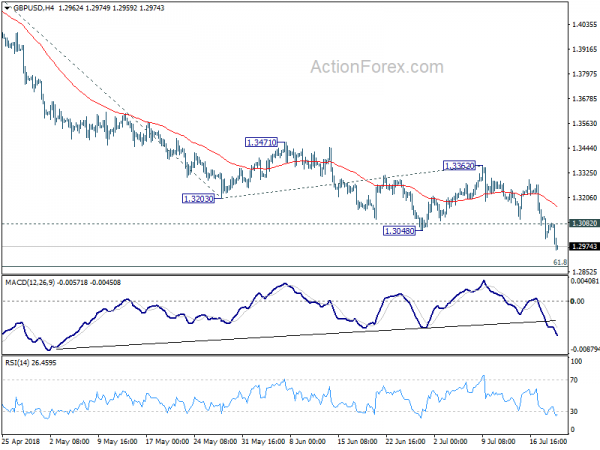 Dollar is trading as the strongest one today as trade spat intensifies again. For whatever reasons, the greenback has been supported by intensifying trade tension between US and other countries. Further buying is seen in Dollar in early US session after another set of stellar job data. Meanwhile Japanese Yen is trading as the second strongest as risk aversion is coming back. On the other hand, Australian dollar reversed earlier job data triggered against, on risk aversion, and follows New Zealand Dollar as the second weakest. Sterling suffered more selling today after UK retail sales miss.

Technically, GBP/USD drops through 1.3 handle and it’s on track to 1.2874 fibonacci level in near term. USD/JPY breached 113.13 as recent rally resume but momentum is a bit unconvincing. EUR/USD is having downside bias for 1.1507 low but it’s still, relatively resilient. A focus now is whether AUD/USD will drop through 0.7309 low to resume larger down trend. Gold is on track to 1200 psychological as selloff accelerates, and could hit the level before within this week.

Dollar rally extends in US session after another set of stellar job data. Initial jobless claims dropped -8k to 207k in the week ended July 14, beating expectation of 221k. That’s also the lowest level since December 6, 1969. The four-week moving average of initial claims dropped -2.75k to 220.5k. Continuing claims rose 8k to 1.751m in the week ended July 7. Four-week moving average of continuing claims rose 6.25k to 1.736m. Also from the US, Philly Fed business outlook rose sharply to 25.7 in October, well above expectation of 20.6.

China: US officials have turned black and white and reversed it

Dollar rises broadly today as trade spat between US and China heated up again. It’s started yesterday when Trump’s economic advisor Larry Kudlow blamed Chinese President Xi Jinping for for holding back the trade deal with the US. The timing of such accusation is a bit odd, sounding like it’s out of nothing. Nevertheless, it doesn’t occupy a lot of air time except that such comments triggered some nerves of Chinese government officials. For the Americans, their focuses seem to be staying on the Trump’s summit with Putin.

Anyway, Chinese Foreign Ministry Hua Chunying said in a regular press briefing today that Kudlow “unexpectedly distorted the facts and made bogus accusations is shocking and beyond imagination.” And, “the United States’ flip-flopping and promise-breaking is recognized globally.” And, “in the face of people all over the world, it is shocking that the relevant US officials have turned black and white and reversed it.” She added that “the US behavior can only seriously damage its own reputation once again, and it is completely unhelpful to solve the problem.” Hua also reiterated China’s position that “do not want to fight, not afraid to fight.”

EU Trade Commissioner Cecilia Malmstrom said today that while she hoped Commission President Jean-Claude Juncker’s visit to the US on July 25 could ease trade tensions, the EU is prepared for retaliation. She said that “if the U.S. would impose these car tariffs that would be very unfortunate. We are preparing together with our member states a list of rebalancing measures there as well. And this we have made that clear to our American partners.” And she added that “it is done in the same way as with steel and aluminum.”

Also, regarding Juncker’s visit, she said it’s to “try to establish a good relations, try to see how we can de-escalate the situation, avoiding it going further and see if there is a forum where we can discuss these issues.” She added that “we don’t go there to negotiate anything.”

Juncker himself said he’s “upbeat and related” ahead of the trip to Washington. He also emphasized that “we will continue to react tit-for-tat to the provocations that might be thrown at us.” And, “when it comes to trade, the European Union, its internal market, its single market, form an indivisible unity and it’s the Commission that is in charge of articulating trade policy. All efforts to divide the European Union are in vain.”

While the UK delivered a string of weaker than expected data this week, markets are still firm on expectation of an August BoE hike. Overall, Q2 was still a solid quarter. However, BoE policymakers will still have PMIs to watch in around two weeks time. That could give more insight on whether the momentum in Q2 is being carried forward to Q3.

Australian Dollar surges broadly as June employment data came in strong on all front. However, the Aussie reversed as dragged down by risk aversion. Headline job grow jumped to 50.9k seasonally adjusted , well above expectation of 16.6k. Prior month’s figure was also revised slightly up by 12k to 13.5k. Full time jobs grew 41.2k while part time jobs also rose 9.7k. Together with the surge in full time jobs, total hours worked rose 0.6%

Unemployment rate remained unchanged at 5.4%. But without rounding, it’s actually the at its lowest since November 2012. Labor force participation rate rose 0.2% to 65.7%. Employment to population ratio also rose 0.2% to 62.1%.

Total exports logged a 19th straight month of growth. Rising trade tension with the US is not having much realized impact so far. Exports to China rose 11.1% yoy, to EU rose 9.3% yoy. Meanwhile, exports to US dropped -0.9% yoy.

Japan is still facing impacts from US steel and aluminum tariffs and threats on auto tariffs. The the blockbuster trade deal with EU just signed earlier this week should provide enough optimism to offset those threats.

GBP/USD’s decline continues to as low as 1.2956 so far. Intraday bias stays on the downside for 1.2874 fibonacci level first. Sustained break there will carry larger bearish implications. In that case, next near term target is 61.8% projection of 1.4376 to 1.3203 from 1.3362 at 1.2637. On the upside, above 1.3082 minor resistance will turn intraday bias neutral and bring consolidations first. But recovery should be limited well below 1.3362 resistance to bring fall resumption.