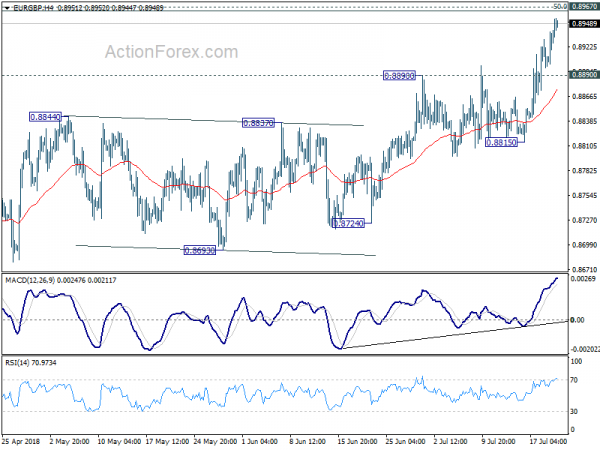 Just after the Dollar index hit one year high at 95.65 overnight, it’s hit down by Trump’s criticism on the supposed-to-be independent Fed policies. For now, the greenback is staying as the second strongest one for the week, next to Swiss Franc. But Dollar will likely have some consolidations today as focus turns to Canada. In particular, Yen trades broadly higher as markets turn into risk aversion mode. The development suggests short term topping in USD/JPY, which could limit Dollar’s rally attempt, if there’s any for today.

Nonetheless, technically, Dollar is still not yet ready for a full blown rally resumption. EUR/USD, currently at 1.1650 is kept well above recent low at 1.1507. USD/CHF, currently at 0.9990, is held well below recent high at 1.0067. Even AUD/USD also defended 0.7309 near term low overnight and recovered. Sterling weakness in, on the other hand, much more apparent. IN particular, EUR/GBP could have a take on 0.8967 key resistance today.

Dollar’s rally was took to a halt by Trump’s verbal interference on Fed’s policies. Trump criticized in a CNBC interview that “I don’t like all of this work that we’re putting into the economy and then I see rates going up.” And he complained that “because we go up and every time you go up they want to raise rates again … I am not happy about it.” Trump also added Fed’s rate hikes and strength of US Dollar are putting the US at a disadvantage. Though, he added that “at the same time I’m letting them do what they feel is best” and Fed chair Jerome Powell is a “very good man”.

There are criticism on Trump’s comments as being intervention on Fed’s independence. But so far, Powell has given enough confidence to the market of carrying out his job in a “strictly nonpolitical way”. What matters most to some economists is that Trump’s comments just do not make sense. The US economy is on course for near 4% GDP growth in Q2, lowest jobless claims in nearly 50 years and inflation at around target. The strength of Dollar is merely reflecting strong fundamentals.

And remember that Trump’s top economic adviser Larry Kudlow just said earlier this week that “it’s possible that a real growth cycle is in front of us for the next four, five or six years.” And, Kudlow added that “there’s no recession in sight.” So, is it time to remove monetary policy accommodation to, at least, bring interest rate back to “neutral’ level?

The set of data should be rather disappointing for the BoJ. The decline in core core CPI suggests that inflation was mainly driven by the surge in energy costs. There wasn’t much of press pressure elsewhere. It’s remains a long road to meet its 2% inflation target. And there is no light on when the central could withdraw the massive stimulus.

Elsewhere, Germany PPI, Eurozone current account and UK public sector net borrowing will be featured in European session. But main focus is on Canada retail sales and CPI. Canadian Dollar wasn’t benefited from BoC’s hawkish rate hike earlier this month. And it will need some solid economic data to offset the impact of falling oil price and trade tension.

EUR/GBP’s rally extends to as high as 0.8954 so far and is finally showing some solid upside momentum. Intraday bias remains on the upside for 0.8967 cluster resistance (50% retracement of 0.9305 to 0.8620 at 0.8963). Decisive break should confirm completion of whole decline from 0.9305. EUR/GBP should then target 61.8% retracement at 0.9043 next. On the downside, 0.8890 resistance turned support is needed to indicate short term topping. Otherwise, outlook will remain bullish even in case of retreat.

In the bigger picture, EUR/GBP is staying in long term range pattern from 0.9304 (2016 high). The corrective structure of the fall from 0.9305 to 0.8620 is raising the chance that rise from 0.8312 to 0.9305 is an impulsive move. But we’re not too confident on it yet. In any case, wed stay cautious on strong resistance from 0.9304/5 to limit upside in case of further rally. Meanwhile, if there is another medium term decline, strong support will likely be seen from 0.8303 to contain downside.