Workers are ‘ghosting’ interviews, blowing off work in a strong job market 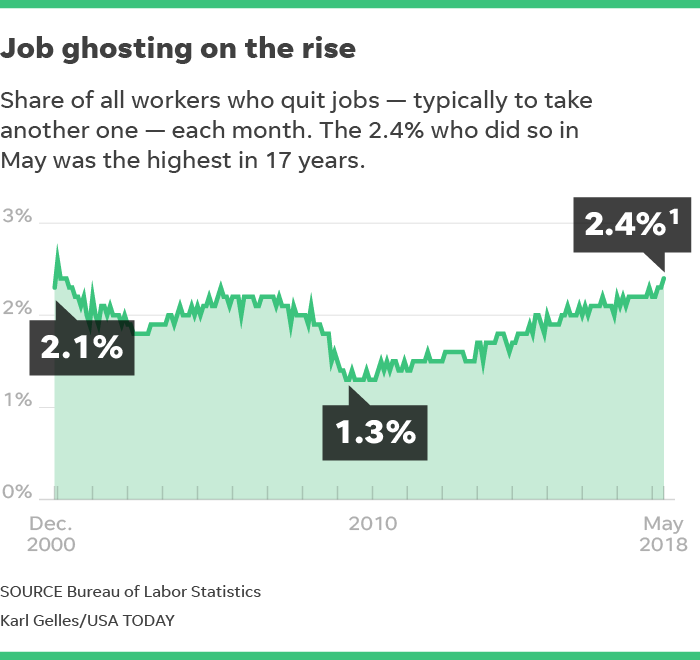 At Carports & More, based in El Dorado Hills, California, nearly half of the 65 job candidates scheduled for interviews the past month didn’t show up.

At VoiceNation, an Atlanta area call center, a similar share of the 10 hires the company was making each month never came in to work.

In the hottest job market in decades, workers are holding all the cards. And they’re starting to play dirty.

A growing number are “ghosting” their jobs: blowing off scheduled job interviews, accepting offers but not showing up the first day and even vanishing from existing positions – all without giving notice.

While skipping out on appointments and work has always happened on occasion, the behavior is “starting to feel like a commonplace” occurrence, says Chip Cutter, editor-at-large at LinkedIn, the job and social networking site, who has studied hiring practices.

While no one formally tracks such antics, many businesses report that 20 to 50 percent of job applicants and workers are pulling no-shows in some form, forcing many firms to modify their hiring practices.

In May, with unemployment then near an 18-year low of 3.8 percent, there were more job openings than unemployed people for just the second month in the past two decades, Labor Department figures show. And 2.4 percent of all those employed quit jobs, typically to take another, the largest share in 17 years.

Ghosting is happening across industries and occupations, Fay says. It was always somewhat of an issue for lower-paying jobs in construction, manufacturing and truck driving, says Alex Riley, president of Merit Hall, a Detroit staffing agency. Now, he says, up to 20 percent of white-collar workers in those industries are taking part in the disappearing acts.

To some extent, employees are giving employers a taste of their own medicine. During and after the Great Recession of 2007 to 2009, when unemployment reached 10 percent, many firms ignored job applicants and never followed up after interviews.

“Candidates were very frustrated because they felt employers were ghosting on them,” Fay says.

A couple of years ago, with the labor market already heating up, Michael Crook of Albany, New York, decided not to go to an interview for a front-line manager job at a Rite Aid. Crook, now 40, who had store managing experience, realized he “didn’t want retail” and could get stuck with night shifts.

“I was just thinking something better will come along,” he says. “I was feeling cocky.” And, he says, “I felt so weird (about) calling” to cancel.

Crook also remembered his own prior job-hunting experience, when employers “would say they’ll call you either way after an interview – and they don’t.”

He did get another job helping process insurance claims. But Crook, who left that position and now receives disability benefits, adds, “I would never” blow off an interview again. He wishes he had gone through with it to give himself another option because he might not have landed another job.

While skipping an interview is made easier by the plentiful job options, it’s also rooted in a desire to avoid letting down an employer in an awkward conversation, Fay says.

Michelle Domingue II, 27, of New Orleans never called to cancel two interviews with school administrators after he got a job as a high school math teacher. “I really just didn’t want to go through the back and forth” of being asked his reasons. Plus, he says, people already think millennials “are entitled,” figuring, “How can they decline something? They haven’t paid their dues.”

At Carports and More, only about 10 percent of job candidates typically are no-shows for interviews, compared to the nearly half in recent weeks, owner Jacob Azavedo says. Resources used to find job candidates are squandered. And Azavedo says he needs “to go back to the drawing board” to find new applicants for the customer service jobs at the 27-employee company, which contracts or brokers the construction of garages, storage sheds, canopies and other structures.

To minimize the disruptions, many firms are changing how they interview and hire.

At JFuerst Real Estate Photography, a Minneapolis firm with 11 employees, four job candidates haven’t shown up for interviews in the past two years, CEO Johnny Fuerst says. So Fuerst has been holding initial interviews with groups of up to 30 applicants for roles such as photographers and receptionists.

“I was trying to mitigate my wasted time,” he says. With such a large contingent of candidates, “I don’t care if half show up.” He says the setting also creates a competitive atmosphere that makes interviewees want the job more. He then winnows subsequent interviews to progressively smaller groups.

Even more resources are frittered away if new hires don’t show up the first day of work. That behavior – or ignoring calls after accepting a job offer – is happening about 30 percent of the time with the servers, bartenders and other workers hired this year by Hollywood Casino in Baton Rouge, Louisiana. That’s about double the previous rate, says Robin Schooling, vice president of human resources. The casino hires about 200 front-line workers a year.

She says hiring managers are working harder during interviews to sell candidates on the benefits of working for the company. And they don’t tell the losing finalists that they’re no longer in the running until the new hire actually arrives at work.

At VoiceNation, where about half the 10 monthly hires never appeared in the office, President Kent Gregoire initially took a page from the airline industry by hiring 15 representatives, expecting some to stand him up. But realizing that wasted recruiting resources, he has shortened the interval before a new hire starts to three days from up to two weeks.

“If you don’t bring them in immediately, they’re still an open agent,” he says.

This month, he says, all 20 of his hires showed up the first day of work.