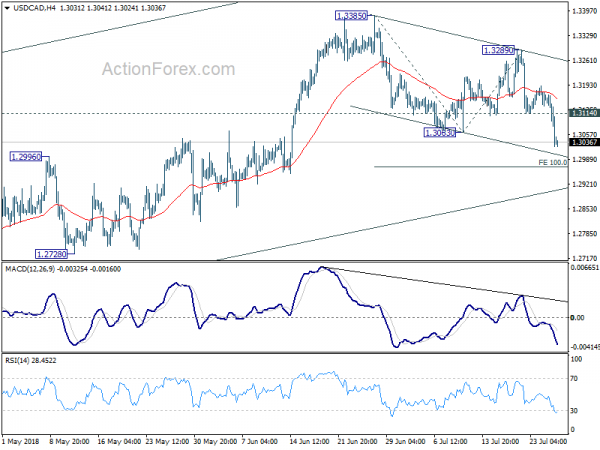 While it appeared that there was a breakthrough in EU-US trade negotiation, the news provide no lift to Dollar nor Euro. Both are trading mixed in Asian session. Indeed, Dollar is the weakest one for the week so far, followed by Euro as the second weakest. On the other hand, renewed selloff in JGB, with 10 year JGB yield hitting as high as 0.098, gives the Japanese Yen a lift. But Even though Canadian Dollar pares back some gains, it’s trading as the strongest one for the week. It’s clear that Canada is a beneficiary if US holds off auto tariffs.

Technically, USD/JPY’s break of 110.74 overnight indicates resumptions of fall from 113.17. Deeper decline would be seen to 109.90 fibonacci level next. USD/CAD also resumed the correction from 1.3385 for channel support at 1.2094. EUR/AUD, AUD/USD and EUR/AUD are engaging in sideway trading in familiar range.

European Commission President Jean-Claude Juncker’s meeting with US President Donald Trump seemed to have achieved a breakthrough that could avoid a full-blown EU-US trade war. A rather positive joint statement was issued pledging to work towards “zero tariffs, zero non-tariff barriers, and zero subsidies on non-auto industrial goods”. This is taken well generally by both sides.

While the auto tariffs were not mentioned in the joint statement, Juncker later said that the Trump made a “major concession” for holding off on further tariffs, including autos, as long as the negotiations continue. Juncker said he expected Trump to follow through on it. Also, he noted that Trump agreed to reassess the measures in the steel and aluminum sector.

On the other hand, Trump hailed that “a breakthrough has been quickly made that nobody thought possible!” He also told reports that EU is going to start to “buy a lot of soybeans”. Trump also said “they’re going to be a massive buyer of LNG… and we have plenty of it”.

EU and US in joint position against China’s unfair practices

One thing to note is that now EU and US seemed to be aligned themselves against China. The statement noted that both sides agreed to join forces against “unfair global trade practices”. And specifically, they the practices include “intellectual property theft, forced technology transfer, industrial subsidies, distortions created by state owned enterprises, and overcapacity.” That’s exactly talking about China.

The joint statement of Juncker and Trump is well received by both sides in general. The Alliance of Automobile manufacturers said the announcement “demonstrates that bilateral negotiations are a more effective approach to resolving trade barriers, not increasing tariffs.” German Economy Minister Peter Altmaier tweeted that “breakthrough achieved that can avoid trade war and save millions of jobs! Great for global economy.”

But Eric Schweitzer, president of the German Chambers of Industry and Commerce appeared to be a bit skeptical. He said “the proposed solutions move in the right direction, but a significant portion of scepticism remains.” He emphasized that “only united as Europeans do we have sufficient economic and political weight to effectively represent our interests.” And Schweitzer warned that “without strong European answers, there is a danger that only we will make concessions and in response face new unreasonable demands from the USA.”

Mexico and Canada targeting to speed up NAFTA negotiations

Canadian Dollar seemed to be benefited from the EU-US trade talks too. Trump’s softened stance on auto tariffs is a positive to Canada, as well as NAFTA talks too. Canadian Foreign Minister Chrystia Freeland said after meeting with Mexican Economy Minister Ildefonso Guajardo that “Canada’s very clear desire is to move the NAFTA negotiations back into higher gear now that we are past the Mexican election”

Guajardo said that “in the next few months and definitely before the election process in the United States, we are trying to constructively advance this negotiation.” He is also optimistic that “there is the possibility of finding a safe landing zone.”

Nonetheless, it should be noted that while the US would want to pursue bilateral agreements with Canada and Mexico, the latter two insist on trilateral agreement. Guajardo said “the essence of this agreement is trilateral, and it will continue being trilateral.” Incoming Mexican Foreign Minister Marcelo Ebrard also said NAFTA “can be modernized but we’re not thinking about it having a different nature to that of today.”

ECB meeting unlikely to be inspirational

ECB meeting is the major focus of today. But it’s unlikely to bring anything inspirational to the markets. No monetary policy change is expected today. The central bank has been managing market expectations rather well. It’s planning to taper the asset purchase program after September, and stop it after December. Interest rates will stay at present level at least through Summer 2019. The question is on whether ECB President Mario Draghi would clarify what exactly he means by Summer. But it’s unlikely as the words are seen as a balance between precision and flexibility.

Some suggested readings on ECB: