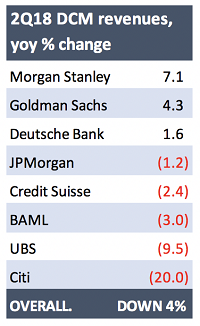 [Read part 1 of our analysis here for coverage of group and CIB results. Part 3 tomorrow will cover FICC and Equities.]

The first of our investment banking business lines, and so the first to be based on a smaller universe. Only the US banks, the two Swiss and Deutsche Bank break out their IB numbers into DCM, ECM and Advisory, so the data here are based on these eight.

The aggregate 2Q18 number is down 4% to $4.9 billion, marking another fairly static quarter for a business that has been at a similar level almost every quarter since 2Q16. For comparison, Dealogic shows global DCM volumes down 1.3% for the quarter compared to the previous year. Most of the firms’ trailing-12-month (TTM) numbers are either at or below their FY17 results, with one exception: Goldman Sachs is building this business energetically and has posted a strong couple of quarters this year.

2Q18: Goldman (up 4%) was still outshone by Morgan Stanley (up 7%) in the quarter. The only other bank that posted a gain was, extraordinarily, Deutsche. CEO Christian Sewing, who is portraying himself as a strict disciplinarian in all things risk-related, name-checked leveraged finance as a particular strength in the bank’s second quarter analyst call, though. So perhaps Deutsche is building where it shouldn’t.

Don’t be too shaken by Citi’s bottom-ranked fall of 20%; it was off a year-ago period that was a huge outlier for the firm. Its 2Q18 result is more in line with the rest of the last two years. JPMorgan just pipped Bank of America Merrill Lynch to be top in absolute revenues, while UBS was the smallest.

ECM is one of the standout performers of the quarter, up 24% on aggregate for the eight banks to its best period by far since 2Q15, with $2.8 billion. At first glance that looks a little odd, given that Dealogic’s global deal volumes for the quarter were actually down 7%. But the improved revenue performance was driven by the US and by better-paying IPOs. Goldman, JPMorgan and Credit Suisse saw their ECM deal volumes rise, although BAML and Citi’s fell. IPO volumes rose 11%.

Momentum looks good, with some banks showing TTM numbers well above their FY17s – particularly so in the case of Goldman, although that’s more a return to form after it lagged others more in 2017.

Citi’s TTM is tracking slightly down on its FY17, and its business is still firmly in the second tier in terms of volume, below the juggernauts of Morgan Stanley, JPMorgan and Goldman. But it’s looking to fix that. Capital markets origination global head Tyler Dickson has placed a special emphasis on Europe, and is counting on his EMEA head Phil Drury to build the best team in the region. The recent hire of James Fleming from BAML as ECM co-head ought to help.

2Q18: Goldman was far and away the best improver of the quarter, up 88% on what had been a very low previous year period. What will be worrying for the peer group is JPMorgan’s ability to increase its already decent revenues by 49% to take it to the top in absolute terms, with $570 million in revenues. The smallest year-on-year increase was 8% at Citi, which looks low but comes off what was (for Citi) a strong 2Q17. Still, it doesn’t look to have quite capitalised on better deal volumes yet in its quest to improve its ECM game.

UBS was a faller, but this was off a strong previous result and also reflects a slightly different business mix – containing private business and corporate equity derivatives. The smallest business is Deutsche’s, as it has been for the last few years, and it fell by 6%. But it has risen each quarter for the last year.

TTM: the banks were up by 17% on a TTM basis, to $9.3 billion, with Goldman the biggest jump, at 56%. Deutsche was down the most, by 35%. The business is more concentrated than ever: the top three now account for 56% of revenues, up from 46% a year ago. BAML had better hope that its excellent 26% quarterly growth can be repeated – its TTM revenues are up just 1%, which looks bizarre for a bank with the heritage of Merrill. Like Citi, it just can’t seem to break into the next level in ECM at the moment.

It was a reasonable quarter in advisory, although the lag here is considerable between announced deals and fees collected. Announced deals in the last 12 months are up 18.7%, according to Dealogic, while completed are down 3.3%.

Aggregate revenues for the quarter rose 9% to 3.37bn, and the quarter was the best since 4Q15. A strong year looks fairly certain, too, with aggregate TTM sitting just above FY17. It is slightly below at Goldman, but all this means is that Goldman’s huge lead over others could be slightly lower come the end of the year.

2Q18: We need to talk about BAML. It’s not controversial to suggest that advisory might be a leading indicator of results within the financing and capital markets business lines. And with BAML’s advisory revenues down 37% for the quarter, when all other rivals were up (even Deutsche managed a 12% increase), it’s a fair bet that management will be focused on what the firm’s coverage bankers are or are not doing for the rest of this year.

Sure, the same quarter last year was a record for the firm, but 2Q18 is the second quarter in a row that has been lower than any quarters in 2017, a period when a new emphasis on advisory had been very evident and was producing excellent results (so much so that the bank won our World’s Best Bank for Advisory award in 2017). That impetus seems to have dropped off now.

Meanwhile, what is in the water at Credit Suisse? Its quarterly revenues of about $315 million are practically what it was making in the whole first half of 2015. CFO David Mathers told us recently how advisory was one of the businesses that had be