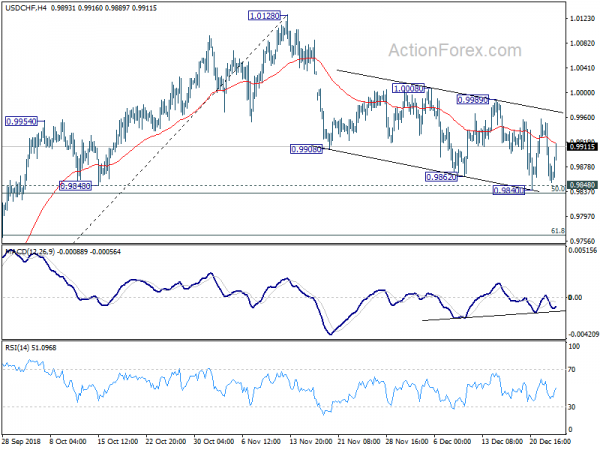 The forex markets are generally rather quite today as most major countries remained on holiday. After another day of free fall on Monday, US stocks futures point to higher open. DOW could recover by triple-digit but the sustainability of the rebound is questionable.

There is no end in sight on US government shutdown. And, while we may feel refreshed after a holiday, the global economy won’t. Today’s rebound in US equities could just be setting itself up for another decline. And as usual, we’d listen, with tremendous caution, to people calling us to buy dips in bear markets.

Anyway, for now, Australian Dollar is the strongest one for today, followed by New Zealand and then Canadian Dollar. Yen is the weakest followed by Swiss Franc, and then Euro. The picture could change quite drastically for the rest of the week.

In a speech at the Meeting of Councillors of Nippon Keidanren (Japan Business Federation) in Tokyo, BoJ Governor Haruhiko Kuroda warned that “it’s necessary to bear in mind that uncertainties have recently increased with respect to developments in overseas economies.”

He noted that the “stock market has been somewhat unstable”. And, “the fluctuations are partly attributable to changes in perception of various risks surrounding the global economy”.

On monetary policy, though, Kuroda sounded rather cautious. He said “In complex times like now, what’s required is to persistently continue with the current powerful easing while weighing the benefits and costs of our policy in a balanced manner.”

In the minutes of October 30/31 BoJ meeting, there consensus that the global economies continued to grow “firmly on the whole” However, there had been “increasing disparities of growth” among countries and regions. Some members urged to pay attention to slowing pace of improvement in business sentiments, as seen in PMIs in “declining trend”. One member noted due to trade friction and rising US interest rates, overseas economies were “beginning to level off”.

On Japan’s price developments, members believed that the “continued relatively weak developments in prices compared to the economic expansion and the labor market tightening largely had been affected by the deeply entrenched mindset and behavior”. But year-on-year change in CPI was “likely to increase gradually toward 2 percent, mainly on the back of the output gap remaining positive and medium- to long-term inflation expectations rising. ”

On risks to baseline scenario of economic activity and prices, the minutes pointed to four upside and downside risk factor : (1) developments in overseas economies; (2) the effects of the scheduled consumption tax hike; (3) firms’ and households’ medium- to long-term growth expectations; and (4) fiscal sustainability in the medium to long term. On specific risks to prices, members pointed to the following three factors: (1) developments in medium- to long-term inflation expectations; (2) the responsiveness of prices to the output gap; and (3) developments in foreign exchange rates and international commodity prices.

Global markets are will be back from holidays tomorrow. ECB will release monthly economic bulletin on Thursday, but that’s more likely quite academic. BoJ summary of opinions will be something that’s worth a read. On data front, US consumer confidence, Japan industrial production, Germany CPI, Swiss KOF will catch most attention. Here are some highlights for the rest of the short week:

USD/CHF rebounded strongly just ahead of 0.9848 key support again. But upside is limited below 0.9989 resistance. Intraday bias remains neutral first. At this point, we’d still expect strong support from 0.9848 to contain downside to complete the correction from 1.0128. On the upside, break of 0.9989 resistance will argue that such correction is completed. Intraday bias will be turned back to the upside for retesting 1.0128 high. However, decisive break of 0.9848 support will bring deeper decline to 0.9541 key support instead.

In the bigger picture, current development suggests that the medium term rally from 0.9186 hasn’t completed yet. Break of 1.0128 will target 1.0342 key resistance next (2016 high). On the downside, firm break of 0.9848 support will dampen this bullish view and turn focus back to 0.9541 key support instead.