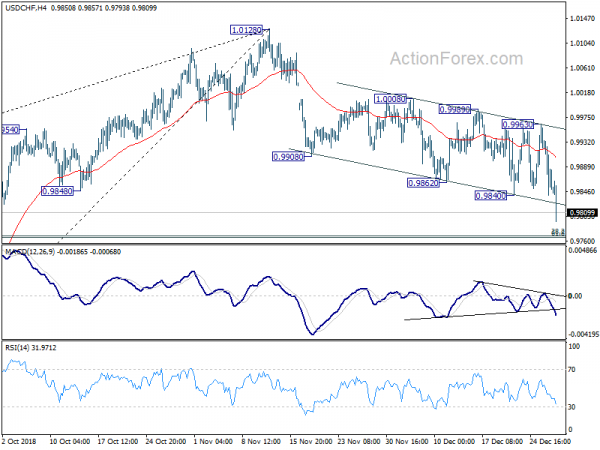 Just ahead of the weekend, Swiss Franc shows broad based power today as it surges across the board. Yen is trading as the second strongest one, but with much weaker momentum. For now, we’re unsure of the exact reason for the rally. European stocks are enjoying a solid rebound. There is no notable selloff in emerging market currencies neither. WTI crude oil is steady in range around 45. Gold does extend recent rally but only with relatively weak momentum. We’d tend to suspect it’s geopolitics related and could be related to US withdrawal from Syria. But we can’t find the exact linkage yet.

Meanwhile Dollar and Canadian remain the two weakest for today and the week. Euro tried to strengthen against both Dollar and Sterling today. But it lacks follow through buying through 1.1485 and 0.9086 resistance respectively. Instead, Euro is starting to be weighed down by selloff in EUR/CHF as well ass much weaker than expected Germany inflation reading.

UK Hunt: We can absolutely get Brexit deal through parliament

UK Foreign Minister Jeremy Hunt is confidence that Prime Minister Theresa May’s Brexit deal could get through the parliament if EU would clarify that the Irish backstop solution is temporary. He told BBC radio that “If it is temporary, then parliament can live with that,” and, “we can get this through, absolutely can.”

Swiss KOF dropped to 96.4 on manufacturing and construction

Swiss KOF Economic Barometer dropped to 96.3 in December, down from 98.9 and missed expectation of 98.8. KOF said in the release “The main drivers of this development stem from indicators belonging to the producing sector (manufacturing and construction). In addition, a weakly negative signal is sent by the financial sector and private consumption. Favorable export prospects, on the other hand, cushion this downward tendency.”

Released from Germany, headline CPI slowed to 1.7% yoy in December, down from 2.3% and missed expectation of 2.0% yoy.

As shown in the Summary of Opinions at the December 19/20 meeting, BoJ board members sounded more concerned with global developments. The summary noted that “regarding the outlook for the global economy, risks have been tilted to the downside on the whole amid heightening uncertainties and a prevailing view that such situation will be protracted.”

Specially, it said “looking at the latest data on trade activities in China, both exports and imports marked negative growth on a month-on-month basis, which possibly indicates a deceleration in the Chinese economy”. For Japan, ” it cannot be said that the actual condition of restoration-related demand and production stemming from natural disasters has been strong”. Also, “recovery in exports to China has been weak, and exports as a whole also have shown weak developments.”

BoJ also maintained that “it is necessary to persistently continue with the current powerful monetary easing as the momentum toward 2 percent inflation is maintained.” And it warned that “trying to normalize monetary policy prematurely before achieving the price stability target could adversely strengthen the side effects.” The summary also noted that long-term yield should be allowed to “temporarily turn negative” and “move upward and downward more or less symmetrically from around zero percent”.

In the bigger picture, the deeper then expected fall form 1.0128 argues that medium term rally from 0.9186 might have completed at 1.0128 already, on bearish divergence condition in daily and weekly MACD. Break of 0.9541 key support will confirm this bearish case. More importantly, the corrective three wave structure will in turn argue that long term decline from 1.0342 (2016 high) is resuming. In that case, 0.9186 will be the next target.