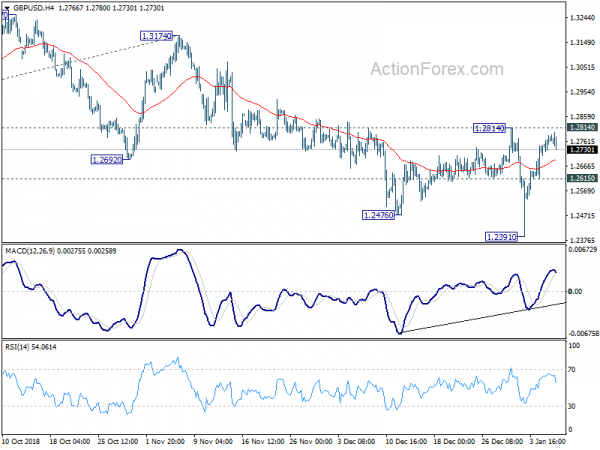 Canadian and US Dollar are the strongest ones in a rather quiet day. WTI crude oil stays firm above 49 but there is no buying to push it through 50 handle yet. But that’s enough to keep the Loonie buoyed ahead of BoC rate decision tomorrow. Dollar is supported by rebound in treasury yields as 10-year yield is now back above 2.7 handle. On the other hand, New Zealand Dollar and Euro are the weakest ones for today.

US-China trade negotiations are extending into overnight in Beijing today. Markets will be eager to hear some positive comments as the meeting completes. Meanwhile, eyes will also be on Trump’s planned speech regarding border wall and government shutdown. But that will come late at around 9pm EST.

UK Prime Minister Theresa May’s spokesman James Slack confirmed today that a vote is scheduled in the parliament on Tuesday, January 15 on the Brexit agreement. He told reporter that “Subject to parliament approving a business motion, the debate will be opened tomorrow … The prime minister said that she would close the debate next Tuesday, which is January 15, when the vote will take place,”

Also he added that May is not trying to delay Brexit by extending Article 50 withdrawal notice. And,  the idea may have been discussed by EU officials but not by British officials.

UK Brexit Minister Stephen Barclay denied the Daily Telegraph report that they’re discussing the possibility of withdrawal request with EU. He told BBC radio that “I’ve had no discussions with the European Union in terms of extension.”

When he’s explicitly asked if he could deny the report, Barclay said “Yes, because I can be very clear that the government’s policy is to leave on March 29, the prime minister has made that clear on numerous occasions to parliament.”

Separately, Irish Prime Minister Leo Varadkar pledged to try to give UK the reassurances needed for getting the Brexit agreement through the parliament. Varadkar said “We don’t want to trap the UK into anything – we want to get on to the talks about the future relationship right away,” And, “I think it’s those kind of assurances we are happy to give.”

Eurozone economic confidence (ESI) dropped “markedly” by 2.2 to 107.3 in December, below expectation of 108.9. Eurostats noted that “the deterioration of euro-area sentiment resulted from lower confidence in industry, services, construction and among consumers, while confidence improved slightly in retail trade.”

Eurozone business climate dropped to 0.82, down from1.09 and missed expectation of 0.99.

In the bigger picture, whole medium term rebound from 1.1946 (2016 low) should have completed at 1.4376 already, after rejection from 55 month EMA. The structure and momentum of the fall from 1.4376 argues that it’s resuming long term down trend from 2.1161 (2007 high). And this will now remain the preferred case as long as 1.3174 structural resistance holds. GBP/USD should target a test on 1.1946 first. Decisive break there will confirm our bearish view.

Previous: China’s risk score flounders on trade, debt and demographics
Next: US: Small Businesses Confidence Moderates at the End of the Year, but Remains Upbeat Relative to History