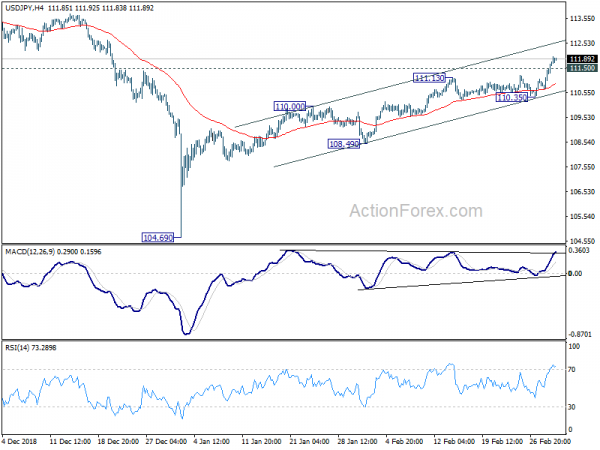 The financial markets are back in full risk on mode today. China Shanghai SSE jumped 1.8% to 2994.01, just missed 3000 handle. Optimism of bottoming in the slowdown is a factor as Caixin PMI manufacturing rebounded to 49.9, just missed 50. More importantly, MSCI said that it will quadruple  the weighting of China-listed shares in its benchmark indexes. Billions of dollars are expected to flow into the market this year. Additionally, German retail sales jumped more than expected while subdued Eurozone inflation could keep ECB on hold for longer.

Yen is trading as the weakest one for today naturally. Additionally, the Japanese currency is pressured by surging global treasury yield. German 10 year yield is now at 0.203 comparing to 0.096 a week ago. US 10-year yield broke 2.7 handle yesterday and is set to extend the rally. Mixed US personal income and spending data is not derailing the upward trajectory. At the time of writing, Kiwi and Aussie are the strongest one. Canadian is the second weakest as oil price retreat and Canadian GDP contracted unexpectedly.

Eurozone PMI manufacturing is finalized at 49.3 in February, up from initial estimate of 49.2, but down from January’s 50.5. That’s also the first contraction reading since June 2013. Markit noted there were concurrent declines in output and new orders. Also, price pressures continued to soften. Among the countries, Germany PMI manufacturing was finalized at 74-month low at 47.6, Italy at 69-month low at 57.5, Spain at 63-month low at 49.9. Though, France recovered to 3-month high at 51.5.

Chris Williamson, Chief Business Economist at IHS Markit said “Euro area manufacturing is in its deepest downturn for almost six years, with forward-looking indicators suggesting risks are tilted further to the downside as we move into spring.” And, “the downturn is being led by Germany and Italy, but Spain has also now fallen into contraction and only modest expansions are being seen in France, Austria and the Netherlands.” Also, “in addition to widespread trade war worries, often linked to US tariffs, and concerns regarding the outlook for the global economy, companies report that heightened political uncertainty, including Brexit, is hitting demand and driving increased risk aversion.”

UK PMI manufacturing dropped to 52.0 in February, down from 52.6 and matched expectation. Markit noted that stocks on inputs and finished goods rose sharpy. However, rate of job losses was at six-year high as optimism hits series low.

Rob Dobson, Director at IHS Markit said that “the current elevated degree of uncertainty is also having knock-on effects for business confidence and employment, with optimism at its lowest ebb in the survey’s history and the rate of job losses accelerating to a six-year high.” And, “apart from the uncertain outlook, manufacturers also face a darkening backdrop of a domestic market slowdown and weakening inflows of new export business, as global growth decelerates and trade tensions bite. Manufacturing and the broader UK economy therefore face a difficult 2019, with the slowdown being exacerbated later in the year as inventory positions are unwound and Brexit-related headwinds likely to linger.”

Japan PMI manufacturing was finalized at 48.9 in February, revised up from 48.5. It’s the first contractionary reading since August 2016. Demand conditions in Japan deteriorated at stronger rate while business outlook was broadly neutral having fallen for the ninth straight month.

Joe Hayes, Economist at IHS Markit noted that “Sharper reductions in output and demand drove the Japanese manufacturing economy into contraction during the midway point of Q1, compounding reductions already recorded in January. Global trade frictions and weak domestic manufacturing demand pose considerable risks to Japan’s goods producers. As such, firms pared back expectations to near-neutrality. The rebound seen in the official Q4 GDP estimate does not appear to be reflective of underlying economic conditions in Japan.

“With the consumption tax hike set to come into play later this year, weak domestic demand will only heighten fears that the economy could be poised for a downturn. Focus turns towards service sector data, which will need to show signs of resilience in order to offset the manufacturing drag.”

Also from Japan, unemployment rate rose 0.1% to 2.5% in January, versus expectation o