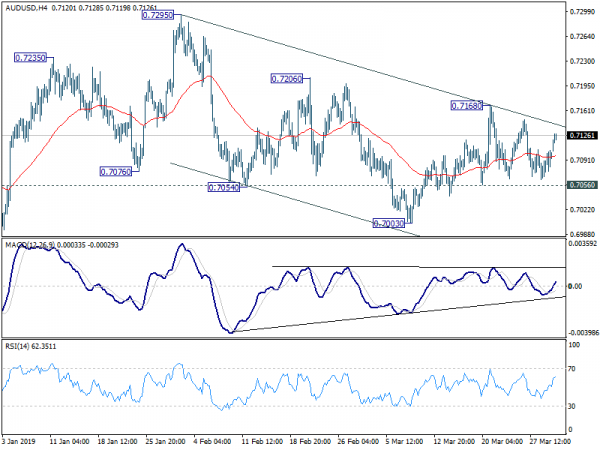 Stock markets staged a strong rally in Asian session as lifted by better than expected manufacturing data from China. Both official and Caixin PMI manufactured climbed back into expansionary region, suggests that the worst could be over. Australian Dollar jumps broadly following generally positive risk sentiments, followed by New Zealand Dollar. Sterling also recovers as markets await what’s next on Brexit. Yen and Swiss Franc are the weakest naturally, followed by Dollar.

Technically, despite today’s rally, AUD/USD and AUD/JPY are still held in recently established range. Thus, bias in the two pairs remain neutral. Though, EUR/AUD broke 1.5780 support and is heading to 1.5721 low. Break will resume larger decline from 1.6765 flash crash top. USD/JPY’s break of 110.95 minor resistance suggests that pull back from 112.13 has completed already and further rise is in favor to retest this resistance. GBP/USD and EUR/USD are both losing downside momentum and there are prospects of some recovery ahead.

China Caixin PMI manufacturing rose to 50.8 in March, up from 49.9 and beat expectation of 50.0. The reading is back in expansionary region and is the highest since July 2018. Markit noted that production and total new work both increase at quicker rates. Also, employment expands for first time in over five years.

Dr. Zhengsheng Zhong, Director of Macroeconomic Analysis at CEBM Group said the reading indicates “a notable improvement in the manufacturing industry.” “Overall, with a more relaxed financing environment, government efforts to bail out the private sector and positive progress in Sino-U.S. trade talks, the situation across the manufacturing sector recovered in March. The employment situation improved greatly.”

Released over the weekend, official China PMI manufacturing rose to 50.5 in March, up from 49.2 and beat expectation of 49.6. That’s firstly the largest monthly rise since 2012. Secondly, it’s also the highest level in six months. The improvement from February’s 3-yer low suggests stabilization in the slowdown in the sector. PMI non-manufacturing rose to 54.8, up from 54.3, and beat expectation of 54.5 too.

In the release, it’s noted the improvement stemmed from post Chinese New Year production recovery and effect of growth stabilization policies. However, overall recovery in market demand is still not apparent. Export orders rebounded while expectations also improved. The positive signals from Sino-US trade negotiations have begun to take effect.

But overall, the statement noted that the current economy is still in a “critical period of stabilization and recovery”. And, it is necessary to “further consolidate and enhance confidence recovery, and to restore market demand and stabilize economic growth.

Japan Tankan large manufacturing index dropped to 12 in Q1, down from 19 and even missed expectation of 13. That’s also the lowest level since March 2017. The quarterly decline was sharpest since 2012. Large non-manufacturing index dropped to 21, down from 24 and missed expectation of 22. It’s also the lowest level since March 2017.

The overall set of numbers are weak, suggesting worsening outlook and deeper slowdown in the Japanese economy. Down the road, if the trend continues, BoJ might be force to re-evaluate its own monetary policy.

Japan PMI manufacturing was finalized at 49.2 in March, up[ from February’s 48.9, signalling slowdown continues. Markets noted that demand remains sluggish, pulling output lower. Firms push resources to clearing backlogs due to lack of new work. And business confidence remains among lowest on record.

Joe Hayes, Economist at IHS Markit, said: “The final manufacturing PMI print of Q1 for Japan points to the worst quarterly performance in the sector since Q2 2016… The economic backdrop for the manufacturing sector in Japan remains fiercely challenging. Asian goods producers face headwinds from slowing growth in Europe and China, while global trade risks are yet to be mitigated by a breakthrough in US-Sino relations.”

Australia NAB Business Conditions rose 3 pts to 7 in March, beat expectation of 2.On the positive side, employment index rose 2 pts to 7. It remains “well above average, suggesting that for now, survey indicators of labour demand remain favourable.” Trading and profitability also rebounded.

However, Business Confidence dropped -2 pts to 0, missed expectation of 4. It also “continued the below average run. “Other forward looking indicators – capacity utilisation and forward orders – showed some improvement but remain at or below average. Also, it’s noted that “overall survey measures of prices and inflation remain weak.”

AiG Performance of Manufacturing index dropped -3 pts to 51 in March, indicating slower pace of expansion. Some respondents attributed the down trend since mid-2018 to “general slowing in the economy”. Some said their customers are “delaying orders” until after Federal election. Also, downturn in housing construction also affect demand.

Heavy weight data ahead to indicate how serious are recession risks

Global slowdown and recession fear was a major theme back in March. This week’s set of important growth and confidence indicators will reveal whether there was already a turnaround, or weakness would be carried over Q2.

RBA rate decision will also be a focus. While the central bank is generally expected to cut interest rates twice this year, April is probably a month to early to turn dovish. RBA will likely wait for more Q1 data, as well as May economic projections before making the shift. ECB will also release March monetary policy accounts. They should reveal more about policymakers’ views on outlook, after recent downgrade.

Here are some highlights for the week.