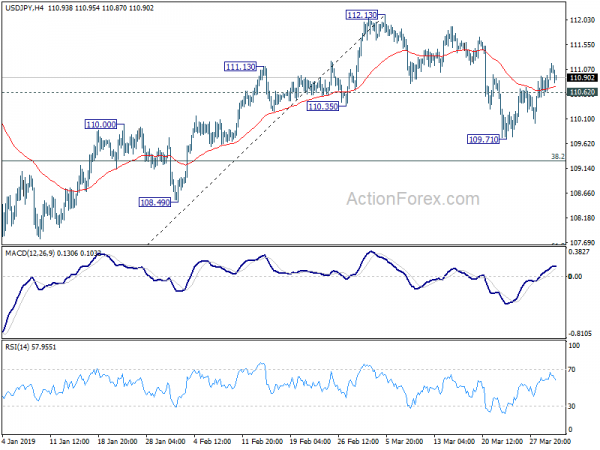 Global markets are generally in risk-on mode today as recession fears eased mildly after improvement in Chinese manufacturing data. While sentiments remain generally positive in early US session, there is a slight bit of cautiousness after disappointment retail sales from he US. Headline sales dropped -0.2% mom in February, below expectation of 0.3% mom. Ex-auto sales dropped -0.4% mom versus expectation of 0.4% mom.

While China manufacture PMIs turned above 50, they’re hardly very encouraging readings. At the same time, there is no clear improvements in other major economies yet, including Eurozone, Japan ann even Swiss and Australia. UK PMI manufacturing posted strong upside price, but that’s primarily due to pre-Brexit stock building. It could indeed be a major headwind moving forward.

Also, the never-ending Brexit impasse still posts big risks ahead. the House Commons will hold a second session of indicative votes on Brexit today. Debate might center around options of customs union, single market or a combination. Also, there would be debates on confirmatory referendum. Prime Minister Theresa May could decide what she’d do next after having the results from the indicative votes.

UK PMI manufacturing rose to 55.1 in March, up from 52.1 and beat expectation of 51.2. It’s also the highest level in 13 months. Markit noted that stocks of inputs and finished goods rise at record rates. Also, trends in output, new orders and employment strengthen.

Rob Dobson, Director at IHS Markit, said: “Manufacturers reported a surge of business activity in March as companies stepped-up their preparations for potential Brexit-related disruptions… The stock-building boost introduces a major headwind for demand, output and jobs growth moving forward…. The survey is also picking up signs that EU companies are switching away from sourcing inputs from UK firms as Brexit approaches. It looks as if the impact of Brexit preparations, and any missed opportunities and investments during this sustained period of uncertainty, will reverberate through the manufacturing sector for some time to come.”

President Federation of German Industries (BDI), Dieter Kempf, warned that “in the case of the disorderly exit of the British from the EU in the current year threatens a relapse to only 0.7 percent increase in gross domestic product”. That would be 0.5% lower than current forecast of 1.2% growth for 2019.

Kempf also complained that “the extension of the time limit for the self-imposed departure of the British from the EU continues the exhausting uncertainty for our companies”. And, “there is a risk that British policymakers once again buy expensive time at the expense of the economy – without wanting to take responsibility for the bill.”

Eurozone PMI manufacturing was finalized at 47.5 in March, revised down from 47.6, down from February’s 49.3. It’s also the lowest level since April 2013, and the second straight months of sub-50 reading. Markit noted there was the biggest monthly decline in new orders since late 2012. Also, confidence hits lowest level in over six years.

Chris Williamson, Chief Business Economist at IHS Markit said: “The March PMI data indicate that the eurozone’s manufacturing sector is in its steepest downturn since the height of the region’s debt crisis in 2012…. January rebound from one-off factors late last year seen in the latest official data is likely to prove short lived… Looking at the forward-looking indicators, downside risks have intensified, and the trend could clearly deteriorate further in the second quarter.”

China Caixin PMI manufacturing rose to 50.8 in March, up from 49.9 and beat expectation of 50.0. The reading is back in expansionary region and is the highest since July 2018. Markit noted that production and total new work both increase at quicker rates. Also, employment expands for first time in over five years.

Dr. Zhengsheng Zhong, Director of Macroeconomic Analysis at CEBM Group said the reading indicates “a notable improvement in the manufacturing industry.” “Overall, with a more relaxed financing environment, government efforts to bail out the private sector and positive progress in Sino-U.S. trade talks, the situation across the manufacturing sector recovered in March. The employment situation improved greatly.”

Released over the weekend, official China PMI manufacturing rose to 50.5 in March, up from 49.2 and beat expectation of 49.6. That’s firstly the largest monthly rise since 2012. Secondly, it’s also the highest level in six months. The improvement from February’s 3-yer low suggests stabilization in the slowdown in the sector. PMI non-manufacturing rose to 54.8, up from 54.3, and beat expectation of 54.5 too.

In the release, it’s noted the improvement stemmed from post Chinese New Year production recovery and effect of growth stabilization policies. However, overall recovery in market demand is still not apparent. Export orders rebounded while expectations also improved. The positive signals from Sino-US trade negotiations have begun to take effect.

But overall, the statement noted that the current economy is still in a “critical period of stabilization and recovery”. And, it is necessary to “further consolidate and enhance confidence recovery, and to restore market demand and stabilize economic growth.

Japan Tankan large manufacturing index dropped to 12 in Q1, down from 19 and even missed expectation of 13. That’s also the lowest level since March 2017. The quarterly decline was sharpest since 2012. Large non-manufacturing index dropped to 21, down from 24 and missed expectation of 22. It’s also the lowest level since March 2017.

The overall set of numbers are weak, suggesting worsening outlook and deeper slowdown in the Japanese economy. Down the road, if the trend continues, BoJ might be force to re-evaluate its own monetary policy.

Japan PMI manufacturing was finalized at 49.2 in March, up[ from February’s 48.9, signalling slowdown continues. Markets noted that demand remains sluggish, pulling output lower. Firms push resources to clearing backlogs due to lack of new work. And business confidence remains among lowest on record.

Joe Hayes, Economist at IHS Markit, said: “The final manufacturing PMI print of Q1 for Japan points to the worst quarterly performance in the sector since Q2 2016… The economic backdrop for the manufacturing sector in Japan remains fiercely challenging. Asian goods producers face headwinds from slowing growth in Europe and China, while global trade risks are yet to be mitigated by a breakthrough in US-Sino relations.”

Australia NAB Business Conditions rose 3 pts to 7 in March, beat expectation of 2.On the positive side, employment index rose 2 pts to 7. It remains “well above average, suggesting that for now, survey indicators of labour demand remain favourable.” Trading and profitability also rebounded.

However, Business Confidence dropped -2 pts to 0, missed expectation of 4. It also “continued the below average run. “Other forward looking indicators – capacity utilisation and forward orders – showed some improvement but remain at or below average. Also, it’s noted that “overall survey measures of prices and inflation remain weak.”

AiG Performance of Manufacturing index dropped -3 pts to 51 in March, indicating slower pace of expansion. Some respondents attributed the down trend since mid-2018 to “general slowing in the economy”. Some said their customers are “delaying orders” until after Federal election. Also, downturn in housing construction also affect demand.