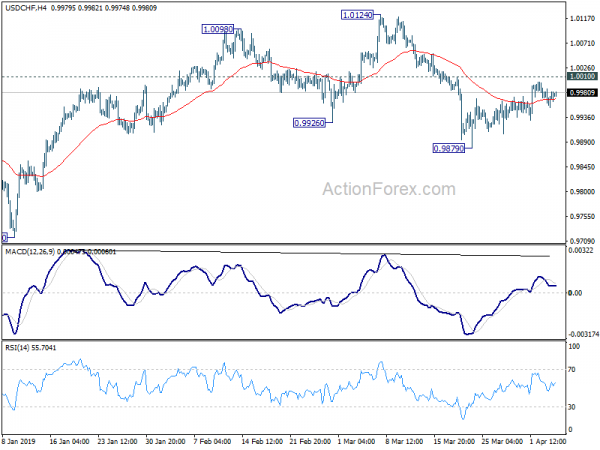 Chinese stocks extend recent rally on news that US-China trade negotiation are completing its final stage. There could even be an announcement of Trump-Xi summit today and Trump meets Chinese Vice Premier Liu He. However, outside China, the markets are just mixed, without clear directions. Economic data released this week so far are rather disappointing, including German, UK and US data. There is risk of a pull back in the stock markets in reaction to trade news as focus immediately turn back to the poor economic fundamentals.

In the currency markets, Canadian Dollar is currently the weakest one for today, followed by Dollar. Both will look into job data to be featured tomorrow. Sterling is the strongest one so far but after all, it’s still bounded in familiar range against Dollar, Euro and Yen. There is no clear sign of a breakout yet, just like there is no sign of breakthrough in Brexit impasse.

News regarding US-China trade negotiations are generally positive. Trump scheduled to meet Chines Vice Premier Liu He at 2030 GMT today (Thursday). WSJ reported that there might even be an announcement of a Trump-Xi summit during the meeting. Bloomberg reported that the draft agreement would give China six years, until 2025, to meet the commitments.

According to unnamed source, under agreement, China pledged to buy more US commodities including soybeans and energy products. Also 100% US owned companies would be allowed to operate in the country. Failure to fulfil these binding commitments would trigger retaliation from the US. There are also some non-binding pledges from China too, which would be implemented by 2029.

However, there is little news regarding how to hand the punitive and retaliation tariffs imposed since last year. Trump previously warned they are necessary “for a substantial period of time” for China’s history on missing promises.

Separately White House Economic Adviser Larry Kudlow said “We’re covering issues that have never really been covered before, including enforcement”. And, “al making good progress, all making good headway, but we’re not there yet… we hope this week to get closer.” Kudlow also said Liu will remain in Washington for three days and possibly longer.

An emergency bill to prevent no-deal Brexit was fast-tracked through the House of Commons on Wednesday, by just one vote – 313 ayes to 312 noes. The cross-party bill was spearheaded by Labour’s Yvette Cooper and the Conservative Oliver Letwin. under it, a legal mechanism is created where the Commons can instruct the Prime Minister to see Article 50 extension in absence of an approval resolution of Brexit withdrawal agreement. It also restrict the Prime Minister’s discretion about whether and when to seek and Article 50 extension. The bill will now be sent to the House of Lords on Thursday and passage is generally expected.

EU’s objection to more short extension is rather clear though. European Commission President Jean-Claude Juncker already told the European Parliament that “the 12th of April is the ultimate deadline for approval of the Withdrawal Agreement by the House of Commons.” And, “if it has not done so by then, no further short extension will be possible.” First Vice President Frans Timmermans also told Germany’s Die Welt newspaper that “we cannot forever continue this way in the Brexit negotiations and always extend by two weeks.” He said, “the British parliament must now make a decision and finally say what London wants.”

Meanwhile, PM Theresa May and Labour leader Jeremy held constructive yet inconclusive meeting. Corbyn described Wednesday’s discussions as “useful but inconclusive.” Labour spokesperson said “we have had constructive exploratory discussions about how to break the Brexit deadlock”, and “we have agreed a programme of work between our teams to explore the scope for agreement.”

In the bigger picture, focus is back on medium term trend line (now at 0.9849). Decisive break there will argue that whole rise from 0.9186 has completed. Further break of 0.9716 will confirm reversal and target next support level at 0.9541. Nevertheless, there is still a chance that price action from 1.0128 are forming a consolidative pattern with fall from 1.0124 as third leg. If this is the case, stronger support should be seen between 0.9716 and the trend line to contain downside.