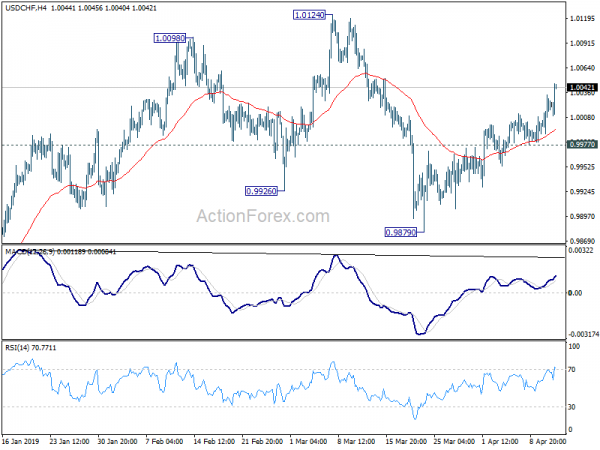 Dollar strengthens notably in early US session with help from another set of solid job data. Initial claims is back trending down and hit another low since 1969. 10-year yield is also recovering and could head back to 2.5 handle. Meanwhile, Euro is following as a close second. Canadian Dollar is the weakest one, followed by New Zealand and then Australian Dollar. Sterling is mixed as Brexit enters into another boring, over-time.

Technically, USD/CHF’s rally is building up momentum for 1.024/28 resistance zone. USD/JPY’s break of 111.28 minor resistance now puts focus back to 111.82 resistance. However, there is no clear side of Dollar strength elsewhere yet. The forex markets remain rather mixed overall.


US initial jobless claims dropped to 196k, another lowest since 1969

US Mnuchin on China trade talks: Both sides agreed to set up enforcement offices

In a CNBC interview yesterday, US Treasury Secretary Steve Mnuchin talked about some concrete progress in US-China trade negotiations, including the core issue of enforcement.

Mnuchin said: “We’ve pretty much agreed on an enforcement mechanism. We’ve agreed that both sides will establish enforcement offices that will deal with the ongoing matters. This is something both sides are taking very seriously… We are really focused on the execution of the documents.”

Nevertheless he refused to put a timeline of the talks. “We are hopeful we can do this quickly, but we are not going to set an arbitrary deadline,” Mnuchin said. “If we can complete this agreement, this will be the most significant changes to the economic relationship between the U.S. and China in really the last 40 years. The opening of the Chinese economy will be a tremendous opportunity with structural changes that will benefit U.S. workers and U.S. companies.”

Chinese commerce ministry confirmed today that senior trade negotiators from both countries held phone calls earlier this week. Gao Feng, the ministry’s spokesman said “in the next step, both trade teams will keep in close communication, and work at full speed via all sorts of effective channels to proceed with negotiations.”

CBI Fairbairn: Businesses not dancing in the streets for Brexit delay

CBI Director General Carolyn Fairbairn, criticized that the Brexit delay till October 31 only provides “brief relief” for businesses. And they wouldn’t be “dancing in the streets”. Instead, it will be quickly followed by ” frustration, exasperation, we’re still here.”

She added that “our huge hope off the back of this six-month reprieve is that it’s used to set up a process and it’s not just people locked in a room on their own which we’ve seen in the last few days.”

In the latest ECB survey for Q2, professional forecasters revised down growth, inflation and core inflation forecasts for both 2019 and 2020. Inflation are projected to be below ECB’s 2% target over the whole forecast horizon. Also, the reported noted that “probability distributions continued to indicate relatively high uncertainty around expected inflation in two years’ time.”

On growth, “respondents considered the current level of uncertainty to be very high and to be having an economic impact, mainly via companies’ investment decisions.” Also “risks to the forecasts for real GDP growth remained to the downside.” The most cited downside risks was “potential impact of a hard Brexit. Many respondents refer to “further escalation of trade conflict between US and China, an the apparent slowdown in China”. “Very few”mentioned upside risks.

In the bigger picture, USD/CHF is still holding above medium term trend line. Rise from 0.9186 could still be in progress. Decisive break of 1.0128 will resume this medium term rally to 1.0342 resistance next. Meanwhile, sustained break of the trend line (now at 0.9884) will argue that whole rise from 0.9186 has completed. Further break of 0.9716 will confirm reversal and target next support level at 0.9541.