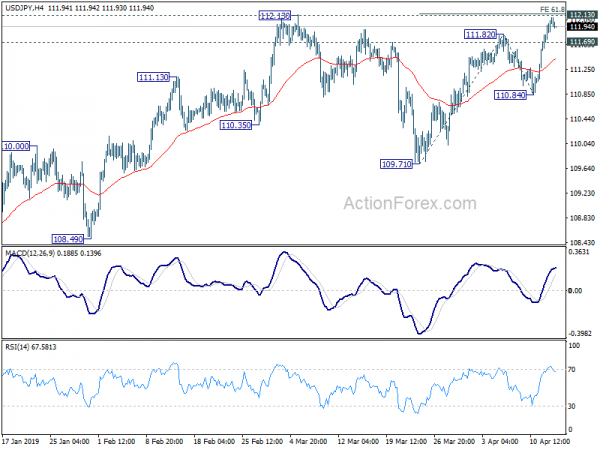 Dollar trade mildly lower in Asian session after more verbal attack on Fed by Trump. Australian Dollar follows as second weakest, paring some of last week’s gains. On the other hand, New Zealand Dollar is the second strongest one, followed by Sterling. But after all, all major pairs and crosses are bounded inside Friday’s range only. The picture could change drastically as the day goes.

Risk appetite firm up mildly on more optimism over US-China trade deal. Comments from US Treasurer Steven Mnuchin were affirmative. Reports that US is conceding demand on subsidies to State Own Enterprises make the progress more credible. To solidify risk rallies, economic data from Eurozone and China this week will need to show more evidence of stabilization.

Technically, Yen pairs will be the immediate focuses. USD/JPY is pressing 112.13 resistance. Firm break will resume whole rise from 104.69 flash crash low. Similarly, EUR/JPY pressing 126.78/127.50 resistance zone. Break will resume larger rise from 118.62. GBP/USD, GBP/JPY, EUR/GBP, EUR/AUD and USD/CAD are staying in established range. These pairs will be watched for signs of breakout.

Over the weeknd, US Treasury Secretary Steven Mnuchin said trade negotiations with China are “close to the final round of concluding issues”. But he emphasized that this is “not a public negotiation”. And it’s a “very, very detailed agreement covering issues that have never been dealt with before”.

Mnuchin claimed that “this is way beyond anything that looked like a bilateral investment treaty.” He said the two sides are negotiating an agreement with seven chapters that would be “the most significant change in the trading relationship in 40 years.”

Also, there will be “real enforcement on both sides”. And he expected the enforcement mechanism to work in “both directions”. “If we don’t, there should be certain repercussions, and the same way in the other direction.”

US watering down demands on SOEs in trade negotiations with China

Intellectual property theft, forced technology transfer, market access, and market distortion by subsidies to State Owned Enterprises (SOEs) are among the core issues in US-China trade negotiations. According to a Reuters report quoting unnamed sources, the US is stepping back on its demand regarding SOEs in China.

An important tricky point regarding SOEs is that it’s tightly interwind with the Chinese government’s industrial policy. That’s deeply rooted in the fundamental nature of China’s system, a “systematic rival” to major economies in the world as seen by EU. While China is making concessions in other areas, it’s an area that the socialist country won’t concede ground. A source said that “if U.S. negotiators define success as changing the way China’s economy operates, that will never happen”.

In addition, China is expected to ramp up purchases of US goods as part of the trade deal. But who’s going to make the purchases? It’s most likely the SOEs which the government has direct control on. Thus, another sources said “the purchasing, for example, reinforces the role of the state sector because the purchasing is all being done through state enterprises.”

Trump once again attacked the Fed with his tweet and claimed that it hadn’t done it job properly. His argument was that otherwise, “Stock Market would have been up 5000 to 10,000 additional points, and GDP would have been well over 4% instead of 3%…with almost no inflation.” However, he made no reference to unemployment rate at decades low, while core PCE was close to target. He also complained that “quantitative tightening was a killer, should have done the exact opposite!”. According to the Federal Reserve Act, Fed’s statutory objectives for monetary policy include “maximum employment, stable prices, and moderate long-term interest rates”. Fed’s objectives here in case you’re interested.

Over the weekend, ECB President Mario Draghi said he’s “certainly worried about central bank independence in other countries, especially… in the most important jurisdiction in the world’. He emphasized, “central banks ought to be left free to choose what’s the best way to comply with the mandate.” He added: “Because if you don’t let them be free, then they’re not accountable. That’s the central banking framework since the 80s everywhere.”

Continuous efforts to politicizing Fed are raising concerns that Fed is becoming a source of “instability” to the world, rather than an agent on “stability.

Eurozone and China data could solidify or derail risk appetite

Two of the biggest risks in global economy are slowdown in Eurozone. Data from both will need to, at least, meet market expectations to keep the current risk appetite going. Eurozone will have German ZEW and PMIs. China will have GDP, industrial productions and retail sales.

While there are expectations of two RBA rate cuts this year, recent data and comments didn’t support such view yet. Australia employment will be a wild card this week too.

The week might be holiday shortened, but it won’t be boring.