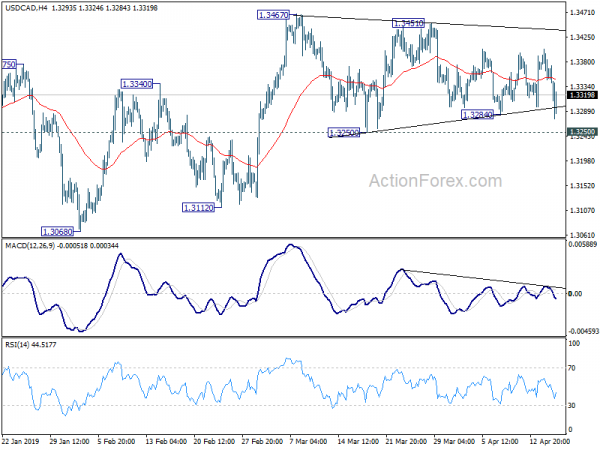 Global treasury yields are boosted by solid data from China today. German 10-year yield hit at high as 0.104 and is now back at around 0.08. US 10-year yield breaches hit 2.614 and it’s now trying to own 2.6 handle. These are both signs of improvements in market sentiments as stabilization in China’s slowdown is a key factor for rebound in global economy in the second half. Though, such optimism is not much reflected in the overbought stocks, especially in the US. DOW just open the day flat, slightly in red.

In the currency markets, Australian Dollar is a clear winner for most of the day. However, Canadian takes over as the strongest one after core CPI unexpectedly accelerated in March. Euro is the third strongest for now, shrugging off German government’s growth outlook downgrade. New Zealand Dollar is the weakest one for today as poor CPI data raises the chance of an imminent RBNZ rate cut at next meeting. Swiss Franc is the second weakest, followed by Sterling, while UK CPI failed to accelerate.

Also from released, Canada trade surplus was smaller than expected at CAD 2.9B in February. US trade deficit narrowed to USD -49.4B in February.

The ministry also noted that global economy should regain some momentum ahead. Strong import would mean a negative contribution to growth in 2019, “purely mathematically”.

Another batch of data from China released today surprised on the upside. GDP growth came in at 6.4% yoy in Q1, unchanged from prior quarter and beat expectation of 6.3% yoy.

Recent data from China continued to paint the picture of stabilization in slowdown, and raised hope that recovery is on the way. That’s an important condition for improvement in global outlook.

CPI has been persistently weak and remained below mid-point of RBNZ’s 1-3% target range for the eight consecutive quarter. Indeed, CPI has only breached 2% level once in Q1 2017 (2.2%) since 2011. Yesterday, RBNZ Governor Adrian Orr noted that “possibilities of first quarter inflation numbers being undershot have already being factored in the RBNZ’s dovish bias”. The downside surprise is giving Orr an even worse picture and solidifies the imminent need for policy easing.

Exports to China, Japan’s largest trading partner, dropped -9.4% yoy, reversing from 5.6% growth in February. Exports to Asia as a whole dropped -5.5% yoy, a fifth straight month of decline. The slump in exports could drag down capital expenditure and private consumption growth . And it raised concerns that the economy contracted again in Q1.

Also from Japan, industrial production was finalized at 0.7% mom in February.

USD/CAD drops sharply to as low as 1.3274 but stays above 1.3250 support. Outlook is unchanged and intraday bias remains neutral. Consolidation from 1.3467 is in progress and could extend, but upside breakout is expected sooner or later. On the upside, firm break of 1.3467 will confirm this bullish case and target 1.3664 resistance next. However, decisive break of 1.3250 will turn bias back to the downside for 1.3068/3112 support zone instead.