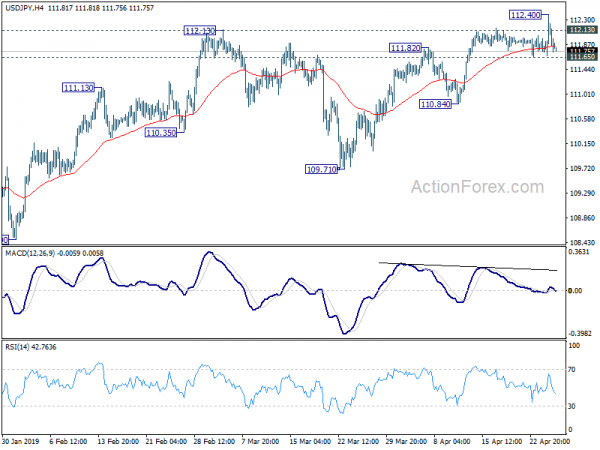 Yen takes the driving seat from Dollar today as markets could be turning into risk averse mode. The greenback is still firm and remains the second strongest for the week. But strong US durable goods orders is not giving it enough boost to extend this week’s rally. On the other hand, Yen is picking up momentum as European stocks turn south, after notably decline in China.

Technically, 111.69 minor support in USD/JPY will now be an important level to watch. Break there will at least indicate short term topping in the pair after failing to sustain above 112.13 resistance. That could be triggered by pull back in US stocks, given that both S&P 500 and NASDAQ are close to record highs. Though, even if that happens, Dollar will likely follow closely as a firm one, at least against Euro, Sterling, Canadian and Aussie.

US initial claims rose to 23k, down trend broken

US initial jobless claims rose 37k to 230k in the weekending April 20, well above expectation of 199k. Four-week moving average of initial claims rose 4.5k to 206k. More importantly, it appears the down trend since January is broken.

In UK, it’s reported that Conservative backbench 1922 Committee rejected a proposal for chance in party rules to allow an early vote of no confidence in Prime Minister Theresa May. However, Committee chairman Graham Brady also requested May to set out a timetable for her departure in the event of a Brexit deal not being passed. This is on top of May’s promise that she would go after the Brexit deal is passed.

Separately, Cabinet Minister David Lidington, said that the government wants to get the thrice-defeated Brexit deal through the parliament before the new European Union parliament opens in July. But the timing will depend on negotiation with the opposition Labour Party. Meanwhile, Commons Leader Andrea Leadsom announced the business for next week. No items regarding Brexit is included.

UK CBI trends total orders rose to 13 in April, up fro -18 and beat expectation of 0. 49% of retail sales said sales volumes were up in April from a year ago. 36% said they were down, giving a balance of 13%. It’s the first time retail sales grew since November 2018.

Rain Newton-Smith, CBI Chief Economist, said: “It’s encouraging to see retailers with more of a spring in their step than in recent months. The recent pick up in real wages is a welcome support to the sector, making the pound in people’s pockets stretch that bit further. However, this month’s sales growth will have been distorted by the later timing of Easter, and falling sales in clothing and department stores underline how challenging underlying conditions remain

Also: “The Brexit extension means an economic crisis has been avoided, for now. However, uncertainty continues to drag on consumer confidence, and many retailers report an impact on their sales. Politicians now owe it to the country – its businesses and people – to come together in a total spirit of compromise, setting aside all party political lines, and agree a way forward to avoid a no deal Brexit.”

UK National Institute of Economic and Social Research (NIESR) pushed back their BoE rate expectation by a year in the new forecasts. NIESR economist Garry Young said “now we expect the first increase in Bank Rate to be next August rather than this August.”

NIESR also noted that Brexit related uncertainty “has led to investment plans being deferred and increased stockbuilding.” Under the main scenario of “soft Brexit”, GDP growth will continue at around 1.5% in both 2019 and 2020. Unemployment rate will stay at around 4%. CPI will remain at around 2%.

Regarding different Brexit scenarios, growth will be similar between staying in EU and “soft Brexit”. However, growth will be weaker is UK is to stay in the customs union, and even worse in a no-deal Brexit.

BoJ left monetary policy unchanged today as widely expected. More importantly, the central bank now provides much clearer forward guidance. It’s noted that “the Bank intends to maintain the current extremely low levels of short- and long-term interest rates for an extended period of time, at least through around spring 2020”. That’s based on “uncertainties regarding economic activity and prices including developments in overseas economies and the effects of the scheduled consumption tax hike.”

Under the yield curve control framework, short term interest rate is kept at -0.1%. BoJ will continue to purchase JGBs to keep 10-year yield at around 0%, with some flexibility. Annual pace of monetary base expansion is kept at JPY 80T. Y Harada dissented again, proposing to tie forward guidance to price stability target. G Kataoka also dissented too, urging BOJ to commit to take additional easing measures if there is downward revision in medium- to long-term inflation expectations. The vote was by 7-2.

On the economy, BoJ said it’s likely to “continue on a moderate expanding trend” despite the impact from overseas slowdown. CPI continued to show “relatively weak developments”, comparing to labor market tightening. But it expects CPI to “gradually” increase towards 2% target. Though, there are “high uncertainties regarding the outlook for economic activity and prices including developments in overseas economies”.

Intraday bias in USD/JPY remains neutral for the moment. On the upside, break of 112.40 temporary top and sustained trading above 112.13 will confirm resumption of whole rise from 104.69, for 114.54 resistance. On the downside, however, firm break of 111.65 minor support will indicate short term topping. Intraday bias will be turned back to the downside for 110.84 support. Break will indicate bearish reversal for 109.71 support and below.