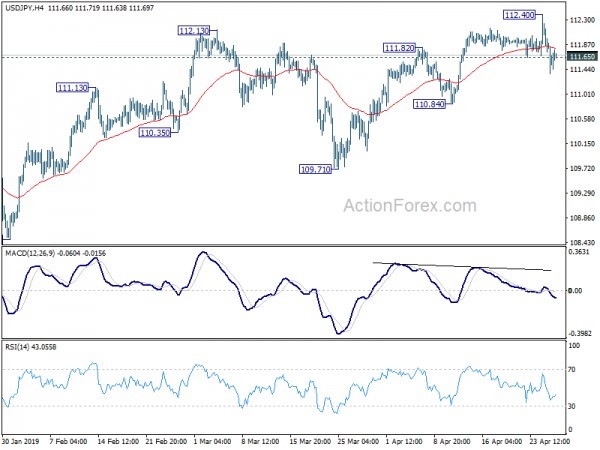 Commodity currencies recover broadly in Asian session as risk markets somewhat stabilized. US stocks closed mixed with DOW paring much of initial losses overnight. New Zealand Dollar is additional supported by record exports in March, and helps lift Australian too. Yen is the weakest so far for today, followed by Dollar and then Euro.

Nevertheless, for the week, Yen remains overwhelmingly the strongest one, with help from steep decline in US and European treasury yields. Dollar follows as the second strongest on flight-to-quality flow. Australian Dollar is the weakest one as case for RBA cut continued to build up. Euro is, for now, second weakest for the week on gloomy outlook. The race between Dollar and Yen could very much depend on Q1 GDP data from US today.

Technically, USD/JPY’s break of 111.65 support overnight is seen as first indication of near term bearish reversal. For now, deeper decline is in favor to 110.84 support for confirmation. EUR/JPY is on track to 123.65 support next, as fall from 126.79 extends. GBP/JPY is pressing 143.72 key support now. Decisive break there will turn near term outlook bearish, aligning with other Yen crosses.

Economy Minister Toshimitsu Motegi met US Trade Representative Robert Lighthizer in Washington yesterday. Jiji news agency reported that currency was not discussed during the trade meeting. Motegi also told reporters there was no demand from US regarding auto import restrictions. Additionally, two sides did not have detailed discussions over agriculture and autos.

Japan Finance Minister Taro Aso met US Treasury Secretary Steven Mnuchin in Washington yesterday too. Aso said he warned Mnuchin currency and monetary policy must not be included in trade talks. Mnuchin mentioned before that he’d like to include a provision to deter currency manipulation in the trade pact with Japan. Aso said he told Mnuchin directly that  “Japan cannot agree to any debate linking trade policy with monetary policy”. Also, “Japan won’t discuss exchange-rate matters in the context of trade talks.”

In March in New Zealand, exports jumped 19% yoy to NZD 5.7B, hitting a record for any month. Imports, on the other hand, dropped -3.4% yoy to NZD 4.8B. Trade balance came in at a NZD 922m surplus, highest since April 2011, and beat expectation of NZD 131m. International statistics manager Tehseen Islam said, “exports to China were the leading contributor to increases in several primary sector commodities including dairy products, beef, lamb, and forestry products.”

BoC Poloz: Could resume rate hike some time down the road

BoC Governor Stephen Poloz said in a Maclean’s magazine interview yesterday that the central bank could resume rate hike “some time down the road”. However, the pre-condition is that incoming data would prove the current slowdown is only temporary. BoC kept interest rate unchanged at 1.75% earlier this week and dropped tightening bias in the statement.

For now, Poloz expected that the slowdown would last “a couple of quarters”. He added, “what we have to do then is wait and see if the data proves to us that we were right about that.” And, “assuming we are, then sometime down the road we’ll be able to say: ‘OK, now it’s time to start normalizing again,’ but that remains to be seen.”

On the topic of trade, Poloz also said Trump’s trade policies could “certainly” trigger a new global recession. “When you think about the gains in income and living standards that have been created by trade liberalization in a postwar period, to erase even a portion of those would be to risk causing a recession globally,” Poloz said.

UK CBI reported sales and BBA mortgage approvals will be featured in European session. But main focus will be on US Q1 GDP, which is expected to show 2.2% annualized growth.

USD/JPY’s break of 111.65 minor support suggests short term topping on bearish divergence condition in 4 hour MACD. Intraday bias is turned back to the downside for 110.84 support first. Break will add to the case of reversal and target 109.71 support and below. On the upside, decisive break of 112.40 is needed to confirm resumption of rise from 104.69. Otherwise, risk will stay mildly on the downside.