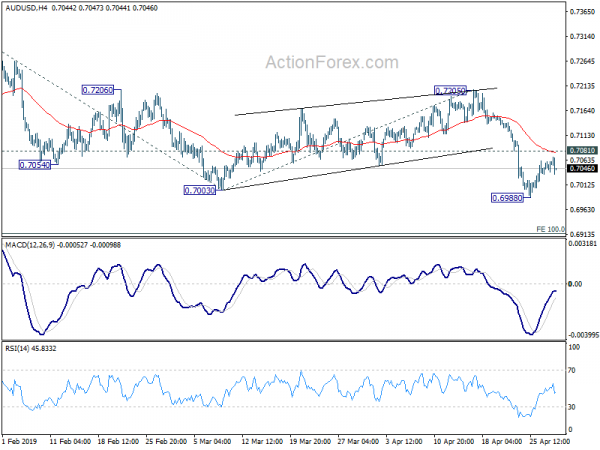 S&P 500 and NASDAQ made record highs overnight but sentiments turned around in Asia. Weaker than expected China PMIs raised doubt on the sustainability of the post lunar new year recovery. There is even question on whether slowdown has bottomed. Nevertheless, Chinese stocks remain resilient so far, with Shanghai SSE staying comfortably above 3000 handle.

In the currency markets, Australian Dollar is the weakest one for today for its economic tie with China. New Zealand and Canadian Dollars are the next weakest. Yen is the strongest one for now, followed by Sterling and then Swiss Franc. The big picture could drastically change in European session with Eurozone GDP featured. We’d finally see how bad the slowdown in Eurozone was.

Technically, Dollar and Yen remain generally in corrective mode and consolidations are set to extend further. It should be a matter of time when the two resume recent rises. The question is who’d be stronger. Judging from the price actions in USD/JPY, Yen is having a slight upper hand.

Caixin PMI manufacturing dropped to 50.2 in April, down from 50.8 and missed expectation of 50.2. Zhengsheng Zhong, Director of Macroeconomic Analysis at CEBM Group said: “In general, China’s economy showed good resilience in April, yet it stabilized on a weak foundation and is not coming to an upward turning point. The Politburo meeting signalled that in the first quarter of this year China had adjusted its countercyclical policy marginally. As pressure on the economy remains in the second quarter, we expect that there will be minor adjustments to the policy but not a turnaround.”

New Zealand ANZ Business Confidence dropped slightly from -38.0 to -37.5 in April. Agriculture has the least confidence at -62.9 while manufacturing at -25.8 was already the best. Activity Outlook improved from 6.3 to 7.1. Agriculture outlook was the best at 20.0 while retail was worst at -7.5.

ANZ noted that the economy is “experiencing a soft patch that is proving reasonably long-lasting”. Steadily declining GDP is expected to continue to middle of this year. However, , easier monetary conditions and policy certainty should see momentum recover, assuming the global outlook continues to improve.

Also, “cost pressures are expected to dissipate as capacity pressures wane, reducing the pressure on firms’ profitability.” ANZ expects RBNZ to cut the OCR, starting in August, to support growth in inflation.

UK GfK consumer confidence was unchanged at -13 in April, matched expectations. Joe Staton, Client Strategy Director at GfK, says:  “We have reported a -13 headline for the past three months and it appears it’s a case of ‘Keep Calm’ when it comes to how confident consumers are feeling right now.  Despite political carry-on in the Westminster bubble with the clock ticking on Britain’s eventual departure from the EU, consumers are holding firm and remain unshaken by the daily headlines of turmoil and intrigue, although we remain in negative territory.”