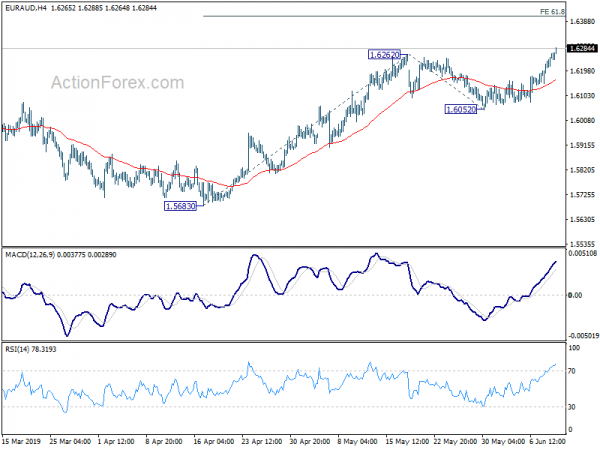 US stocks closed generally higher overnight even though the rally looks a bit stretched. Positive sentiments continue in Asian session today. Yen is naturally one of the weakest on risk appetite. But Australian and New Zealand Dollar are also among the weakest, continuing recent decoupling with risk markets. We’ll see if such decoupling is developing into a long-lasting trend. Meanwhile, Canadian Dollar and Euro are so far the strongest ones for today.

Technically, EUR/AUD’s break of 1.6262 indicates resumption of recent rise from 1.5683 and could be targeting 1.6765 high eventually. AUD/USD’s recovery from 0.6864 should have completed at 0.7022 and deeper fall would be seen back to retest this low. EUR/USD is so far very resistant despite Dollar’s rebound attempts. Euro is partly helped by rises in crosses in particular against Sterling and Aussie. For now, as long as 1.1251 minors support holds, EUR/USD’s rebound from 1.1107 is still in favor to continue.

Trump expects to meet Xi at G20, or raise tariffs

Trump said yesterday that he and Chinese President Xi are “scheduled to have a meeting” at the G20 summit in Osaka. He added, “We’re expected to meet and if we do that’s fine, and if we don’t — look, from our standpoint the best deal we can have is 25% on $600 billion.”

He repeated, “China is going to make a deal because they’re going to have to make a deal”. Also, “at the same time it could be very well that we do something with respect to Huawei as part of our trade negotiation with China. China very much wants to make a deal. They want to make a deal much more than I do, but we’ll see what happens.”

Australian NAB Business Condition dropped again in May to 1, down from 3. Private sector continues to lose momentum. Goods distribution industries remain particularly weak, and manufacturing is not far behind. Business Confidence jumped from 0 to 7, in a post-election spike, as well as on RBA rate cut expectations. However, forward looking indicators suggest more weakness lies ahead.

Alan Oster, NAB Group Chief Economist noted “business confidence saw a sharp increase in the month following the Federal election and a confirmation from the RBA that rates would be cut in June. We think this will be a short-term spike given other forward-looking indicators saw further deterioration in the month. Forward orders declined further and in addition to being well below average are negative. Capacity utilisation has also pulled back in 2019 to date and is now a touch below average”.

“While confidence, at least at face value was a positive outcome, business conditions deteriorated further. Trading conditions and profits are particularly weak. The employment index which we are watching closely, partially reversed some of its decline last month, but is only around average”.

UK employment data will be the major focus in European session. Eurozone will also release Sentix investor confidence. Later in the day, US will release PPI inflation.