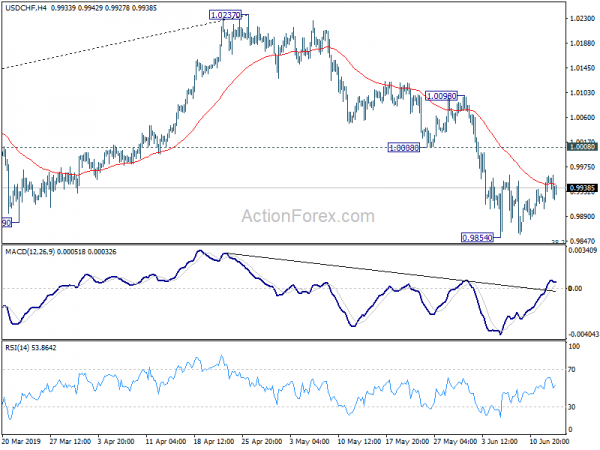 Attacks on two oil tankers in the Gulf of Oman is the biggest news in early US session. WTI oil price is up 3.5% and is back pressing 53 handle after dipping to 50.85 yesterday. The news is both supportive Swiss Franc and Canadian Dollar, which are currently the two strongest ones for today so far. Australian Dollar remains the weakest one as weak details in the job report affirms RBA’s path for rate cuts this year. New Zealand Dollar follows as second weakest.

Technically, notable weakness is seen in Euro today. But at this point, EUR/USD is holding above 1.2510 minor support. EUR/JPY stays above 122.10 minor support. EUR/GBP is kept well above 0.8829 minor support. There is not clear sign of topping in the resilient Euro yet. Yen attempted to rally early today but retreated with risk aversion. USD/JPY and GBP/JPY will likely stay in consolidation for a while longer.

SNB left Sight Deposit rate unchanged at -0.75% as widely expected and changed the name to SNB policy rate . SNB will also “remain active in the foreign exchange market as necessary”. The central bank noted that expansionary monetary policy “remains necessary” against the backdrop of the current price and economic developments”. Franc’s exchange rate is “somewhat stronger” than in March and is “still highly valued”. Current markets “continues to be fragile”.

Also signs from global economy “remain mixed”. But SNB expect global growth to “remain in line with potential”. Risks are “still to the downside” and are “more pronounced” than at March meeting. “Chief among them are political uncertainty and trade tensions, which could lead to renewed turbulence on the financial markets and a further dampening of economic sentiment.” Swiss growth “gathered momentum” at the beginning of 2019 with “positive” labor market development and “well utilized” production capacity. Momentum remains “favorable” for 1.5% growth in 2019.

In the post meeting press conference, SNB Chairman Thomas Jordan noted that “when the trade dispute between the US and China escalated again in May, the Swiss franc and the Japanese yen appreciated” as safe havens. And, “in light of the high valuation of the franc and the fragility of the situation, our willingness to intervene remains necessary, as does the negative interest rate.

Jordan also, noted decline in long term rates in US, Swiss and Eurozone since December meeting. And, “the global decline in long-term interest rates reflects the heightened risks. Inflation expectations in Swiss “declined slightly” but “remain within the range of 0% to 2% that we equate with price stability.”

Swiss State Secretariat for Economic Affairs expects growth to remain “below average” this year on subdued outlook and high uncertainty. But growth forecasts for 2019 was revised slightly up to 1.2%, from 1.1%. For 2020, growth projection was kept unchanged at 1.7%.

SECO noted that “declining momentum in the international economy, the development of world trade is weak and demand for Swiss products is flattening out, slowing down the export economy.” And, “downside risks continue to predominate for the global economy”.

It warned that with the recent tariff increases between US and China, the trade dispute has taken an “unfavourable turn”. Swiss economy would “cool off more strongly” if situation were to intensify further, particularly if EU and Germany were to be significantly affected. Meanwhile, “political uncertainty remains high in Europe”, including Brexit and Italy.

German Federal Ministry of Economy and Energy said the economy will “remain subdued for the time being”. And data indicates continuation of “two-part development” as services support growth but manufacturing is in decline. Meanwhile, there are also two parts in manufacturing, paralyzing industry and booming construction.

The ministry also noted “the first signs of the economic slowdown are evident in the labor market: employment continues to grow, but the lower momentum is solidifying. Unemployment increased in May, not just because of special factors.”

Ahead of  a meeting of euro zone finance ministers Italian Economy Minister Giovanni Tria insisted that no additional measures are needed over its budget. But Italy can still seek a deal with EU to avoid the excessive deficit procedures. He said “we will explain we will reach our targets over deficit… we don’t need additional measures, (but if needed) we will adopt them”. And what will happen at the Eurozone finance minister meeting by July 9 is that ” we will seek a deal.”

Eurogroup President Mario Centeno warned that reducing Italy’s debt “is of utmost importance for growth, for the stability of the euro zone.” And, what  he expected to hear from Tria was “that the targets that were committed by the Italian government at the end of last year are achieved”.

Australia employment rose 42.3k in May, well over expectation of 16.0k. However, the growth was mainly driven by 39.8k addition in part-time jobs. Full-employment rose merely 2.4k. Monthly hours worked in all jobs also decreased by -0.3%. Unemployment rate was steady at 5.2% , above expectation of 5.1%. Participation rate rose 0.1% to 66.0%.

In seasonally adjusted terms, the largest increase in employment was in New South Wales (up 38.5k), followed by Victoria (up 28.6k) and Queensland (up 7.8k). The only decreases were in Western Australia (down -4.0k) and Tasmania (down -0.4k).

The data suggests that there is still considerable slack in the labor market. According to recent comments from RBA Assistant Governor Luci Ellis, unemployment could need to be pushed down to as low as 4.5% before material uplift in wage pressure and inflation. There’s still a long way to go for the central bank, which is on track for more rate cuts this year.

Also from Australia, consumer inflation expectation was unchanged at 3.3% in June.

From Japan, BSI manufacturing index dropped to -10.4 in Q2. Tertiary industry index rose 0.8% mom in April versus expectation of 0.4% mom.