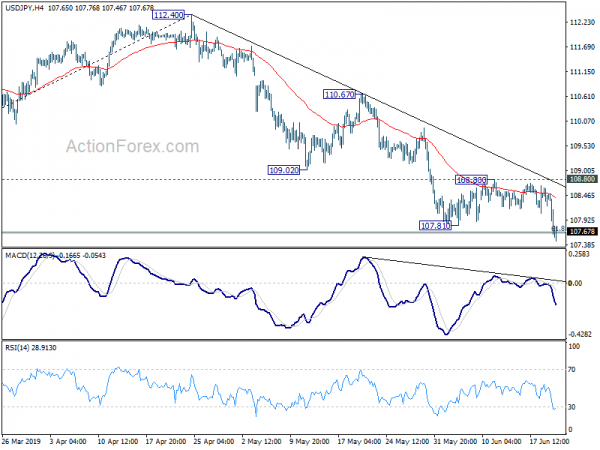 Dollar drops broadly overnight after Fed indicates that it’s ready to “act as appropriate” on interest rates, depending incoming data. It’s clearly a sign that Fed is opening door for rate cut, even though it may not come as soon as in July. Selling picks up momentum today together with falling 10-year yield, which breaches 2.0 handle in Asian session. At this point, Australian Dollar follows as second weakest as RBA affirmed more rate cut is underway. Yen is third weakest on strong rally in Asian stocks. New Zealand Dollar is the strongest following better than expected GDP report, and then Swiss Franc and Euro.

Technically, USD/JPY’s break of 107.81 support confirms resumption of fall from 112.40 for 104.69 low. It’s seen as the most important indication of Dollar weakness. USD/CAD broke 1.3239 support to resume fall from 1.3564 and reaffirm case of medium term bearish reversal. USD/CHF’s sharp decline indicate rejection by 1.0008 support and it’s heading through 0.9854 support to resume down trend from 1.0237. 1.1347 in EUR/USD and 1.2765 resistance in GBP/USD will be two key resistance to overcome, to align Dollar’s bearish outlook.

Fed’s announcement overnight was clearly dovish, but not dovish enough to trigger a free fall in the greenback. In short, Fed dropped its “patient” stance and pledged it “will act as appropriate” to incoming data. In the new economic median economic projections, Fed forecasts interest rates to be unchanged this year, followed by a cut in 2020, and then a hike in 2021.

Inflation appears to be main driver behind the revisions in forecasts. Core PCE inflation projections in 2019 and 2020 are both revised down. Though, it should be noted that GDP growth for 2020 was revised up, likely due to the rate cut. Unemployment rate forecasts are revised down for whole horizon.

Fed Chair Jerome Powell insisted in the post meeting press conference that ” the baseline outlook remains favorable”. He pointed that “Seven weeks ago we had a great jobs report and came out of the last meeting feeling that the economy and our policy was in a good place.” However, “news about trade has been an important driver of sentiment in the interim.”

Here are suggested readings on FOMC:

The official China Daily newspaper tried to talk down expectations on the upcoming Xi-Trump meeting at G20. An editorial said both parties are “in the mood for serious dialogue”. However, “the two parties’ expectations are too divergent to allow” conclusion of an agreement. It added, “more likely than not, the one-on-one meeting will end up being the start of a new phase in the negotiations with the two leaders personally setting out their country’s respective bottom lines.”

Separately, Chinese Premier Li Keqiang reiterated the promises to open its market for foreign investors and businesses. He said today to a group of multinational executives that “China will maintain our long-standing commitment to reform and opening in order to continue to expand and open. We welcome more and more foreign investment to come to China”. “We will also relax access to even more fields to create a market-oriented, law-based internationalized business environment.”

BoJ left monetary policy unchanged today as widely expected. Under the yield curve control framework, short-term policy interest rate was kept at -0.1%. JGB purchase will continue continue to keep 10-year JGB yield at around zero percent, with some flexibility depending on developments. Monetary base is expected to increase at around JPY 80T per annum. Y. Harada and G. Kataoka dissented again in 7-2 vote.

In the accompanying statement, BoJ warned that “downside risks concerning overseas economies are likely to be significant”. Risks include US macroeconomic policies, consequences of protectionist moves and their effects, emerging markets such as China, global adjustments in IT-related goods, Brexit and geopolitical risks.

Though, BoJ maintained that Japan’s economy is “likely to continue on a moderate expanding trend”. Domestic demand is expected to follow an uptrend. Exports are projected to show some weakness, but would stay on a “moderate increasing trend”. CPI is likely to increase gradually toward 2 percent, mainly on the back of the output gap remaining positive and medium- to long-term inflation expectations rising.

Also from Japan, all industry activity index rose 0.9% mom in April, above expectation of 0.70% mom.

In a speech on “The Labour Market and Spare Capacity” delivered today, RBA Governor Philip Lowe reaffirmed that the central bank is on track for further rate cuts again. He said that would be “unrealistic to expect that lowering interest rates by ¼ of a percentage point will materially shift the path we look to be on.” And, “the most recent data – including the GDP and labour market data – do not suggest we are making any inroads into the economy’s spare capacity.”

Therefore, “it is not unrealistic to expect a further reduction in the cash rate as the Board seeks to wind back spare capacity in the economy and deliver inflation outcomes in line with the medium-term target.” Though, he also emphasized that Australia should also look into other options to get closer to full employment, including fiscal policy and structural policies.

New Zealand GDP grew 0.6% qoq in Q1, unchanged from prior quarter, and matched expectations. Looking at the sectors, growth were driven by 2.0% expansion in goods producing industries. Services growth slowed to 0.2% while primary industries contracted -0.7%. On the components, household spending was up 0.5%, investment spending was up 2.4%, exports of goods and services was up 2.8%

While the headline number was a little stronger than expected, slowdown in services, which accounted for two thirds of GDP, remained a concern. Also, investment growth was mainly driven by residential and nonresidential buildings. Contractions were seen in all other components. RBNZ might be granted some more room to wait-and-see with today’s data. But bias will remain towards easing beyond next week’s meeting.

UK events will be the major focus for today. BoE is widely expected to keep Bank rate unchanged at 0.75%. Asset purchase target should be held at GBP 435B. Both decisions should be made by unanimous 9-0 votes. For BoE, Brexit remains overwhelmingly the major risk factor ahead, that could change economic projections and rate path drastically. UK will also release May retail sales. ECB will publish monthly economic bulletin while Eurozone will release consumer confidence. Later in the day, US will release jobless claims, Philly Fed survey, current account and leading indicator.