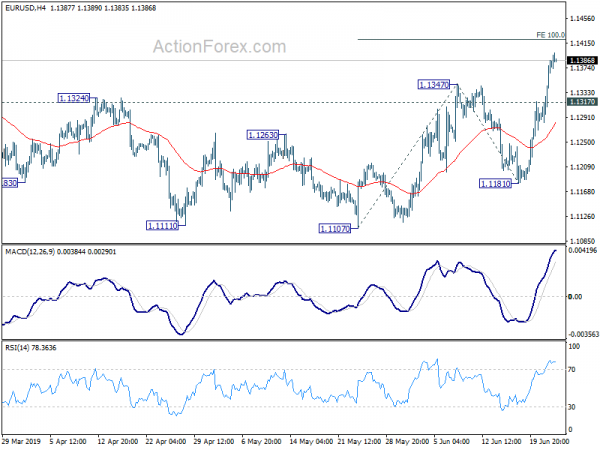 Dollar stays generally soft in quiet markets but selling seems to have slowed in early US session. Trump criticizes Fed as sticking like a “stubborn child” on interest rates. Such comments are ignored by markets, sensibly, in general. The key to Fed’s policy is whether Trump is able to make an agreement with China to resume trade negotiations this week. Or he’d fail again. Then there will be economic data to show how the economy are suffering from his own trade policies, starting from durables and PCE inflation this week, then ISMs and NFP next.

Staying in the currency markets, Sterling is currently the weakest one for today, followed by Yen and then Dollar. Australian Dollar leads commodity currencies higher. Euro is mixed after German Ifo business climate dropped to lowest since November 2014, without serious deterioration.

Other markets are generally steady, except that German DAX tumbles today together with 10-year bund yield. Mercedes-Benz maker Daimler leads the decline with 3% fall after it cuts 2019 earnings outlook on Sunday. 10-year bund yield hit as low as -0.314, not far from-0.326 record low.

Trump complains Fed with his tweet again and said it “doesn’t know what it is doing”. He said Fed “raised rates far too far” and “did large scale tightening, $50 Billion/month”, referring to balance sheet wind down. And, if Fed had gotten it right, “thousands of points higher on the Dow, and GDP in the 4’s or even 5’s”. Trump also said Fed policymakers stick “like a stubborn child”. And, “when we need rates cuts, & easing, to make up for what other countries are doing against us. Blew it!”

China urges US to compromise and make concessions in trade talks

At a news briefing regarding G20 summit, Chinese Vice Commerce Minister Wang Shouwen said talks are underway between China and US teams regarding trade negotiations. He gave no details on the highly anticipated meeting between Xi and Trump ahead. Though, he reiterated China’s stance on mutual respect and urged US to make concessions for compromises.

Wang said, “mutual respect means each side must respect the other’s sovereignty”, apparently referring US demand for China to implement the trade agreement with domestic laws. Wang also said “equality and mutual benefit means the consultations have to happen on an equal basis, the agreement to be reached has to be beneficial for both sides… Meeting each other half way means both sides have to compromise and make concessions, not just one side.”

Wang also noted Xi has asked Trump to treat Chinese companies fairly during last week’s telephone conversation. He added “we hope that the U.S. can remove certain unilateral measures inappropriately taken against Chinese companies, in the spirit of free trade and the World Trade Organization.”

Ifo President Clemens Fuest noted: “Companies have grown increasingly pessimistic about the coming months. However, their assessment of the current business situation improved marginally. The German economy is heading for the doldrums.”

RBA Lowe: It legitimate to ask how effective further monetary easing would be

Australian Dollar is said to be lifted by RBA Governor Philip Lowe’s question on effectiveness of further rate cuts. Lowe said in a panel discussion in Canberra today that “it’s a legitimate question to ask how effective further monetary easing would be”.

Lowe explained that exchange rate is an “important channel” through which easing stimulates growth. And other transmission mechanisms “are weaker at the moment.” However, he added “we trade with one another, we don’t trade with Mars, so if everyone’s easing, the effect that we get from exchange-rate depreciation via the transmission mechanism isn’t there.”

Meanwhile, it’s possible to ease more than other major central banks. But Lowe warned this was “quite a dangerous path to go down.” Instead, he urged the country to switch focus to fiscal policy and structural reforms. Also, “governments here and around the world should have their top drawers full with ideas.”

Currently, markets are expecting RBA to cut interest rates by -50bps from 1.25% by year end. The next move could come as early as in August. To us, we also don’t understand why Lowe’s comments could shoot up the Aussie. He didn’t indicate less need to loosen up monetary policies. Rather, he’s simply suggesting that cutting interests are not enough to lift inflation back to target.