Trump and Xi meet Saturday — If it goes poorly, the global economy could teeter into recession

Stocks are likely to see a temporary relief rally and bonds could sell off if there is a ‘ceasefire’ declared in the trade wars by the U.S. and China this weekend, but the damage to the global economy could continue until a tariff-ending deal is struck.

Wall Street has been handicapping the outcome of the much anticipated meeting between President Donald Trump and President Xi Jinping, and many investors believe the two will likely agree to hold off on new tariffs and restart negotiations, but existing tariffs would not be rolled back by much, if at all.

The meeting, at the G-20 summit, is so important that market pros broadly see it as an event that could affect the course of markets for the rest of the year; impact the trajectory of global economic growth, and help determine when and what actions the Federal Reserve and other central banks might take.

“You just amp up the odds even greater that we’re going to have a global recession, if there’s no detente between the U.S. and China. With respect to G-20, I don’t think there will be anything negative, and it will probably be a ‘kumbaya’ moment,” said Peter Boockvar, chief investment strategist at Bleakley Advisory Group.

Trade representatives have been meeting ahead of the Osaka dinner between Trump and Xi Saturday, and even with so much at stake, there are no expectations for a significant deal in the near future. Bank of America Merrill Lynch surveyed investors and found that about two-thirds expected that there would be no deal this weekend, but there would be no new tariffs either.

While few expect an absolute failure at the meeting, UBS economists said if that were the case and the trade war escalated with new tariffs, the world could see a recession-like slowdown in growth.

If the trade war escalates, “we estimate global growth would be 75 [basis points] lower over the subsequent six quarters and that the contours would resemble a mild ‘global recession’ —similar in magnitude to the Eurozone crisis, the oil collapse in the mid-1980s and the ‘Tequila’ crisis of the 1990s,” UBS global head of economic research Arend Kapteyn wrote in a note.

An unnamed Trump administration official told Reuters on Tuesday that U.S. goals for the talks are to reopen negotiations and there could be a possible agreement on no new tariffs. The official said the U.S. would like negotiations to resume where they broke down in May.

Boockvar said markets should react positively to a “ceasefire” scenario, and stocks could rally, while bond sell off and the dollar could bounce. “The fact tariffs are still on will limit the extent of that relief rally,” he said. “If all of a sudden people say the Fed won’t have to be as aggressive because there’s potential for a trade deal, then you will see an adjustment in the bond market.” 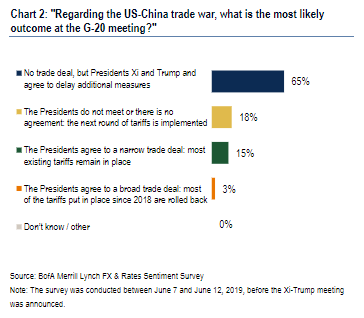 After months of leaving interest rates on hold, the Fed signaled last week that it could cut interest rates this year, with the first cut possible in July. The Fed has said it is concerned both by trade and a slowing global economy.

Citigroup global economist Cesar Rojas said he expects a “ceasefire with a hand shake agreement” between Trump and Xi that would avoid escalation of the national security issues and tariffs, and aim for a deal later this year. Trump would likely refrain from putting his threatened 25% tariffs on the remaining $300 billion in Chinese goods that so far have not been impacted.

“That still harms the economy because we still have the tariffs in place on the $250 billion and also because you will have continued uncertainty,” he said. Rojas said the hit to the U.S. economy from existing tariffs is expected to be about 0.1 percentage points of GDP, but 0.8 percentage points to Chinese growth over the next one to two years.

The trade war has become complicated by other issues, such as the U.S. black listing of Chinese telecom company Huawei. On the other side, China has dominance over rare earth minerals and could invoke a damaging embargo. There are also other sources of tension, like the U.S. sanctions on Iran, a supplier of Chinese oil .

Economic damage has also shown up in the trade data of both counties. The U.S. trade deficit narrowed by 2.1% in April, but the decline in both imports and exports signaled that the U.S. was trading less with the rest of the world. The deficit with China, however, surged 29.7% in April to $26.9 billion.

Capital Economics said the exports of Chinese goods that were not under tariff increased to the U.S., but specific Chinese exports, subject to tariffs, dropped off.

“Shipments of goods in the $50 [billion] list were almost 30% lower in the first four months of 2019 than they were a year before. Exports of goods in the $200 [billion] list, which had been holding up fairly well last year, have now slumped as well,” wrote Capital Economics. “In contrast, exports to the US of non-tariffed goods have been growing at broadly the same pace as China’s exports to the rest of the world. These will be the next in the firing line if there is a further escalation in the trade war.” 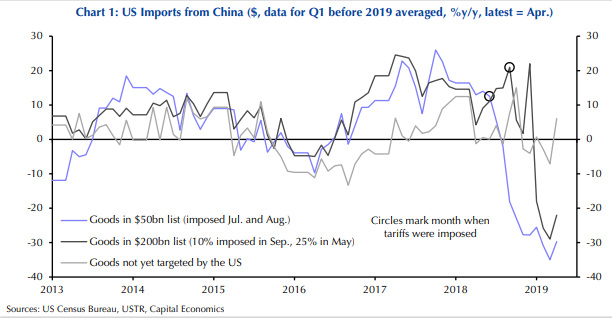 In the U.S., the trade wars have hit business confidence and slowed investment spending, and that could continue. “To the extent that there is uncertainty remaining, we’re going to see a delay in investment, and that hits the economy,” Rojas said.

If Trump and Xi agree to keep negotiating that could head off more severe problems but not stop the impact of the trade conflict from spreading, economists said.

On Tuesday, the latest consumer confidence reading fell sharply to 121.5, about 10 points lower than May. The Conference Board said the escalation in tariffs and trade tensions earlier in the month “appears to have shaken consumer confidence.”

Bank of America Merrill Lynch economists say there is little chance a “grand bargain” can be reached in Osaka, and in fact the Trump administration has lowered expectations for one. They noted that for instance, Commerce Secretary Wilbur Ross said that “the most that will come out of the G-20 might be an agreement to actively resume talks.”

While both countries ultimately want a deal, China may be willing to play a long game and Trump is not yet being pressured by the 2020 election. The pivot by the Fed to position for a rate cut has helped calm markets and drive stocks to new highs, giving Trump more leeway.

“Another reason to fade the chances of a breakthrough is that the US administration is not under much pressure to compromise at the moment. Our framework for the trade war has consistently been ‘no pain, no deal.’ With the stock market near its all-time high, markets expecting a strong ‘Powell put’ and GDP growth running at more than 3% yoy, the US is likely to try to drive a hard bargain. Like it or not, the Fed’s dovish message of offsetting downside risks encourages trade war escalation,” the BofA economists noted.

They also note that the two sides appear to be very far apart, and talks broke down in May because China reportedly did not want to commit to changes in its laws to help allay U.S. concerns about intellectual property theft, forced technology transfers and currency manipulation.

“Without such commitments, it is difficult to imagine that the U.S. will acquiesce to China’s red line that any trade agreement should include the removal of all tariff increases since last year,” the economists noted.

Even if there is a handshake agreement Saturday, the trade tensions could escalate later, as they did after the two leaders met in Argentina last year.

“Just because he doesn’t do [more tariffs] now doesn’t mean he doesn’t eventually do it,” said Boockvar. But there are also reasons for Trump to take a more moderate stance. “I think the data is becoming clear that we’re seeing slowing, and he’s got an election coming up.”

WATCH: Here’s the best case scenario from the Trump-Xi meeting at the G-20 summit