Dollar Firm after Strong NFP Growth, But No Follow Through Buying Yet 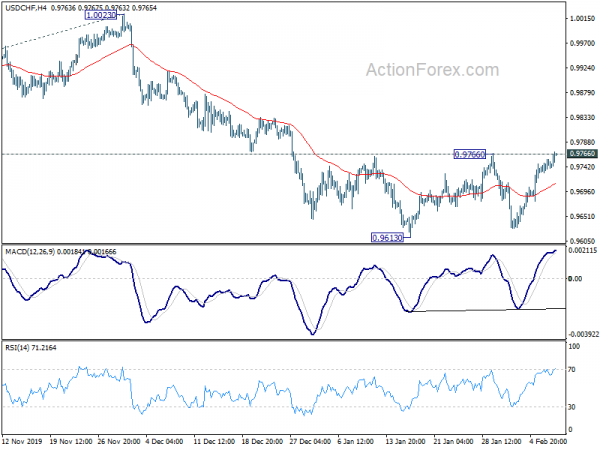 Dollar remains firm in early US session after strong headline NFP number. But there is no follow through buying for the moment. Risk appetite also recede mildly as market head towards weekly close. Over the week, Dollar remains the strongest one, followed by Australian Dollar and then Canadian. Sterling is the weakest, followed by Yen and then Swiss Franc.

Technically, USD/CHF breaches 0.9766 resistance today, but there is no follow through buying yet. Rejection by this resistance will maintain bearishness for extending the down trend from 1.0237. But firm break there will confirm short term bottoming and bring rebound back to 1.0023 resistance. AUD/USD’s focus is back on 0.6670 and break there will resume medium term down trend.

RBA Governor Philip Lowe told a parliamentary economics panel that the board is “expecting progress to be made towards the inflation target and full employment”. But the progress will be “only gradual” with uncertainties. The board “has been discussing” the case of further easing. But considering the balance of pros and cons, RBA decided to keep cash rate unchanged this week.

Lowe added, “if the unemployment rate were to be moving materially in the wrong direction and there was no further progress being made towards the inflation target, the balance of arguments would tilt towards a further easing of monetary policy.”

Additionally, he also said it’s “still too early to tell” about the impact of China’s coronavirus outbreak. But he warned, “the impact is going to be large”. And, “given what we know at the moment”, the hit to Australian economy would be worse than SARS. He added, the outbreak could take 0.2% off the Australia’s growth. But, if the virus “persists for an extended period, the effect on economic activity is likely to be larger than currently projected,”