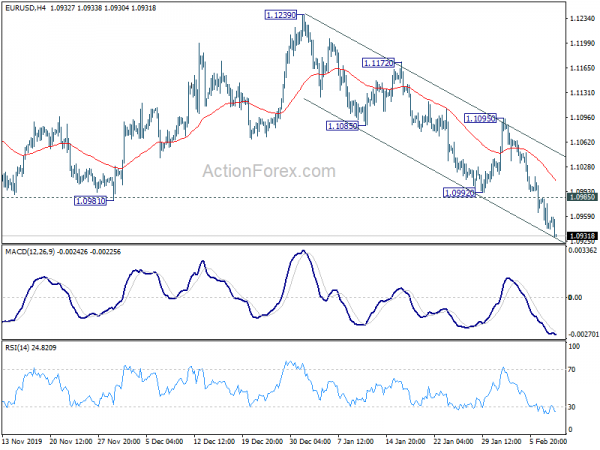 Global financial markets are in mild risk averse mode today but movements are limited. Dollar is lifted by renewed buying in early US session, and it’s extending recent rally against Euro and Canadian Dollar. Strength against other major currencies is not apparent yet. In particular, Sterling is currently the strongest one, displaying some resilience. On the other hand, Loonie turns softer as WTI oil price is back pressing 50 handle.

Technically, 1.3327 resistance in USD/CAD is a focus today. Decisive break there should confirm completion of the triangle consolidation from 1.3664 and bring retest of this high. EUR/USD’s decline is picking up downside momentum again and is on track to retest 1.0879 low. GBP/USD could have formed a temporary low at 1.2872. But recovery should be limited well below 1.3209 resistance to bring another fall.

Fed Governor Michelle Bowman said in a speech that the current monetary policy setting “should help support the economic expansion”. Her outlook is for “continued growth at a moderate pace” with unemployment rate “remaining low”. She also saw inflation “gradually rising to the Committee’s 2 percent objective. On the whole, she added that “the national economic backdrop looks very favorable”.

Sentix said: “The outbreak of the corona virus and the subsequent drastic measures taken by the Chinese government to seal off the mainly affected Hubei province with the provincial capital Wuhan cast a shadow over the economic outlook.

As much as the consistent approach of the Chinese government is to be welcomed from a medical point of view and for the protection of the people, the damage could have a negative impact on the global economy if the virus continues to spread uncontrolled and thus prolongs the crisis.”

WHO’s China Representative, Gauden Galea, said in an Bloomberg interview that it’s absolutely impossible to reach a conclusion at this stage that China’s containment measure on coronavirus has worked. He added, “the best sign is when one sees numbers reach a peak and then decline well beyond the incubation period. We are not in that stage yet”.

Galea also said WHO is now closely watching 10 provinces in China for signs of new infection hot spots. The provinces include Zhejiang, Guangdong and Henan. Recent decline in new cases in Hubei gives a “much needed sigh of relief”. But it’s accompanied by a rise in numbers of infections in other provinces.

China headline inflation soared to 5.4%, highlight in nearly a decade

Headline CPI in China soared to 5.4% yoy in January, , up from 4.5% yoy and beat expectation of 4.9% yoy. That’s also the highest level in almost a decade. PPI, the upstream price gauge, returned to inflation of 0.1% yoy, after diving into deflationary territory since July 2019.

Elevated inflation continues to create a dilemma for the PBOC, China’s central bank, in monetary policy implementation. Before the outbreak of coronavirus, China was also caught between stabilizing growth and containing inflation. Monetary policy stance on the two objectives diverges. While accommodative monetary policies such as rate cut and reduction of RRR are required for the former, these risk exacerbating the latter.

EUR/USD’s decline from 1.1239 is extending today and intraday bias stays on the downside. Further fall should be seen to retest 1.0879 low. On the upside, above 1.0985 minor resistance will turn intraday bias neutral first. But recovery should be limited below 1.1095 resistance to bring fall resumption. 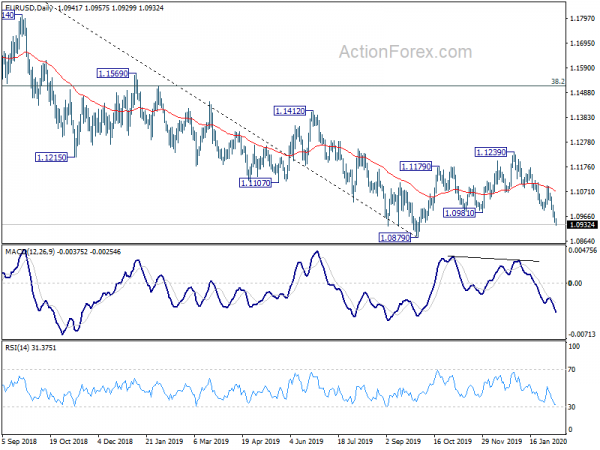