Euro Selloff Deepens on Growth Concern, No Sign of Bottoming Yet 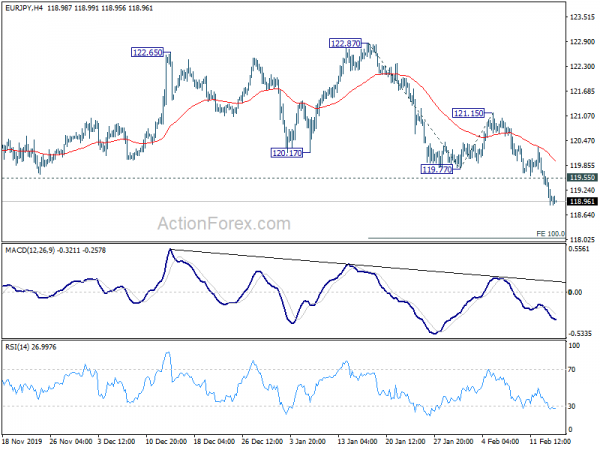 Euro remains the weakest one for the week as selloff deepens. It seems that markets believe the coronavirus outbreak in China would hurt Eurozone’s economy more, in particular the export led German economy. Optimism of recovery this year is dented. Swiss Franc is somewhat dragged down by the common currency and is trading as second weakest. On the other hand, Sterling is the strongest one for the week after yesterday’s strong rally on cabinet reshuffle. Australian Dollar is currently the second strongest after it defended a key support against Dollar earlier in the week.

Technically, EUR/CHF breaks 1.0629 key support level without any sign of bottoming yet. Sustained trading below this level could prompt further selloff in Euro elsewhere. In particular, that could trigger a break of 0.8276 low in EUR/GBP to resume larger fall from 0.9324. AUD/USD could be one to watch before weekly close as recovery from 0.6662 lost momentum well ahead of 0.6774 resistance. Decisive break of 0.6662/70 zone will confirm medium term down trend resumption.

Fed Williams: 2020 growth about the same as last year

New York Fed President John Williams said the three rate cuts last week “positioned us well to keep the economy growing above trend”. The economy is in a “very, very good place” and he expected 2020 growth would be “about the same” as the 2.25% last year. Also he sees inflation picking back up to close to 2%.

Nevertheless, some risks persist including ongoing global slowdown, persistently low inflation, as well as the Wuhan coronavirus outbreak in China.

BoJ Executive Director Director Eiji Maeda said Japan’s economy have suffered a “big contraction” in Q4 due to sales tax hike and sluggish global demand. But he maintained that the “economy is expected to continue expanding moderately as a trend, thanks to robust capital expenditure and government spending. He also warned that “we need to be vigilant against various risks such as the impact the coronavirus outbreak could have on output and spending by inbound tourists”.

The government announced today to spend JPY 10.3B from budget reserves to ease the impact from China’s coronavirus. Finance Minister Taro Aso said the government was ready to take additional steps depending on how big the impact from the outbreak could be. Economy Minister Yasutoshi Nishimura also said the economy was expected to pick up but the coronavirus outbreak could pose a risk to growth.

IMF spokesman Gerry Rice said there’s “a lot of uncertainty” regarding China’s Wuhan coronavirus outbreak, and “it’s fast moving”. It’s too early to gauge the impact of the Chinese and global economy. IMF would hope to have more insights when G20 meet in Saudi Arabia at the end of next week.

Nevertheless, he added, “over the medium to long term we remain confident that China’s economy is resilient. “It’s a large economy, and China has the resources and the resolve to meet this challenge.”

New Zealand BusinessNZ Performance of Manufacturing Index rose 0.4 to 49.6 in January, staying in contraction region. BNZ Senior Economist, Craig Ebert said that “in the context of the latest global ructions – this time related to the COVID-19 virus – January’s PMI could arguably be read as a relatively decent outcome. At the same time, it is surely too early for the PMI to capture the economic consequences of the virus”.

Germany and Eurozone GDP will be the main focuses in European sesession. Eurozone will also report employmnet change and trade balance. Swiss will release PPI. Later in the day, US will release retail sales, import price, industrial production, business inventories and U of Michigan consumer sentiment.