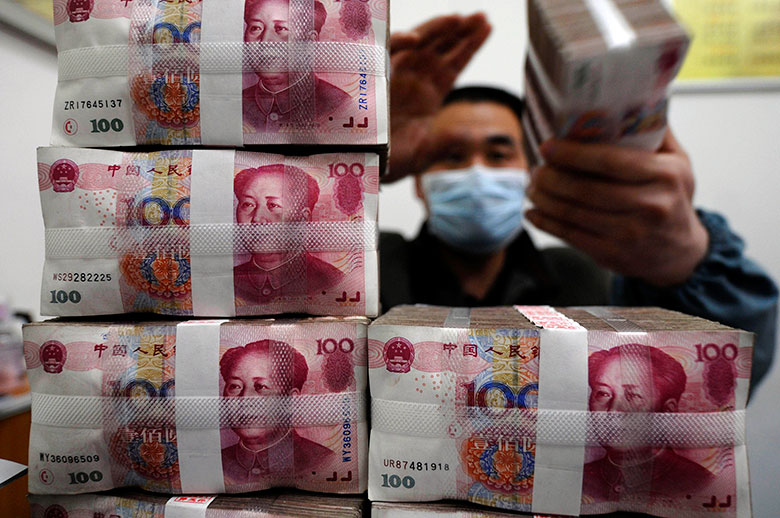 At the height of the global financial crisis (GFC), China staved off recession by turning the dial on stimulus up to 11.

This time around, with Western governments pledging trillions of dollars in state aid as coronavirus threatens to turn a slowdown into a slump, Beijing reacted by nudging the needle up to a four or five. Why?

It’s not like China to be so wary. In 2008 finance minister Xie Xuren: “Saw the GFC for what it was, far earlier than his global counterparties, and did the world a favour”, says Taimur Baig, chief economist at Singapore’s DBS Bank.

This time all the action is in Washington and Frankfurt.

The European Central Bank’s Pandemic Emergency Purchase will buy sovereign and corporate bonds for as long as the programme is needed. Its price tag is €750 billion, but it is effectively unlimited. Even that was put in the shade by the $2 trillion stimulus package approved on March 27 by the US House of Representatives.

China has been slower off the mark. It is assailed on all sides: by predictions of economic woe (the investment bank CICC tips output to grow by 2.6% in 2020 and says that number could be zero or worse if recession lands and lasts); by widespread condemnation of its inability to contain coronavirus when it had the chance; and by the threat to its own dearly held plans to transform the People’s Republic into a high-tech, high-income economy by 2030.

The government hasn’t been completely inactive. A credit line of Rmb1 trillion will be channelled by the central bank to small lenders. It is letting banks roll over loans, turn a blind eye to missed payments and register non-performing loans as ‘performing’. And it looks set to increase the fiscal deficit and allow local authorities to sell more infrastructure bonds.

But when added up, it all falls well short of the ‘big bazooka’ it fired at itself in 2008, surprising everyone with its success.

China’s problem – the reason it cannot bring out the heavy artillery – is threefold.

First, it isn’t the same country it was in 2008. It is still rich, with FX reserves at the end of February 2020 of $3.115 trillion. But those numbers are way off its 2014 peak of $4 trillion. Its unproductive economy chews up capital and spits it out and its budget deficit, equal to 4.9% of GDP last year, a record high, is only set to widen.

“Unlike 2008/09, China does not have the ‘might’ to launch gigantic fiscal stimulus [measures] this time to save the world,” says DBS’s Baig. He points to January 2020 data from the Institute for International Finance (IIF), which puts total domestic debt as a share of GDP at 310%, the highest level in the emerging world.

Rhodium Group analysts Logan Wright and Daniel Rosen said in a March 24 report that policymakers were: “Limited by an impaired financial system unable to generate anywhere close to the same volume of credit as in the past.” Most of the credit China creates, they say, just goes to paying interest on debt incurred after 2008.

Delayed reforms, mounting debts and an economy dominated by badly-run state firms leave China facing “an ugly choice”, they say. It can either act: “Less heroically with stimulus today or pull out all the stops to prop up current demand by walking further into a debt trap at home.” Even then, they add, there is no certainty that tomorrow will be better than today.

That leads us to the second reason: the state of its banking system. Twelve years ago China turned to its lenders to deliver stimulus. They did as they were told – and ballooned in size. Sector-wide assets stood at Rmb292.5 trillion at the start of March 2020, according to the central bank, against Rmb64.2 trillion at the end of 2008.

That makes China’s banking sector 4.5 times larger today than it was at the start of the global financial crisis. Or put another way, when measured by total assets it makes up around half of entire global GDP. Having quadrupled in size since 2008, the domestic banks cannot do so again.

Many lenders also face a shaky future. Non-performing loans are rising fast, up from 1.7% in September 2019 to 2.1% in February 2020. According to the CBIRC, the main banking regulator, soured lending, minus special-mention loans, totalled Rmb3.3 trillion in February, against Rmb2.4 trillion five months earlier.

Over the past year Beijing has bailed out three lenders including Baoshang Bank and Bank of Jinzhou. Eventually, Rhodium’s analysts say, the number of failures will get “too large for the government to support.” That point was tipped to arrive in 2021. Now, they warn, it could happen this year.

That leads us to the third reason: simply put, it isn’t clear whether stimulus can work, much less what it would do.

Western state aid aims to keep corporates afloat, people paid and jobs intact. This crisis is transforming banks, Euromoneynoted in an editorial, into “an intrinsic part of the solution”, transmitting capital through the economic and financial ecosystem.

China faces a different but far starker challenge. The first nation hit by coronavirus, it is now pretty much back at work. Factories and bars are open again, with state media urging people to spend, framing consumption as a mark of loyalty. A strong rebound in the official purchasing managers’ index, to 52 in March, from a record low of 35.7 in February, beat most expectations.

The problem is one of external demand and control of that is out of its hands. It went into the Lunar New Year in late January juggling a rising coronavirus death toll and a supply shock due to shuttered offices and factories. Authorities envisaged “everything being stabilized by April”, says DBS’s Baig. “You can see why they didn’t introduce mass stimulus measures then.”

But then Covid-19 spread and was labelled a global pandemic after making landfall in the West. The problem now reverses course, as China faces the headache of producing goods that cannot be shipped, flown or rolled out of the country. “China will face an unprecedented external demand shock,” warns Baig.

This is no small consideration in an economy heavily dependent on exports and functioning supply chains. Exports slumped 17.2% year on year in the first two months of 2020, to $292 billion, according to the General Administration of Customs, and that data will likely get worse.

There is a final reason why China is so wary of embracing another giant round of stimulus, and it speaks to the level of internal conflict within the Party.

Beijing is on the horns on a dilemma. It knows it cannot afford to turn on the taps full bore. On the other hand, it fears the first recession since 1976, a property slump and, most of all, a jobs crisis. The urban unemployment rate was a record high of 6.2% in February, a fact no one in the mainland will have missed.

That it cannot react in the way it would like to is also explained by a deleveraging drive that began in 2016 and, officially at least, remains in place.

Four years ago, Beijing belatedly admitted its banks couldn’t go on lending at an ever-faster pace forever. It forced big banks to cut lending, made it hard for small firms to get funds and ran shadow lenders out of business, all under the watchful eye of its top banking regulator, Guo Shuqing. It worked for a while. But then Donald Trump came to power and kick started a trade war and its capital-hungry economy faltered.

That at least is its public position. The reality is that despite a four-year deleveraging cycle, the country entered the Covid-19 crisis in worse shape, not better. According to IIF data, sovereign debt grew in 2019 at its fastest pace in a decade.

Where does China go from here? Listening to Liu Shangxi, president of the key government think-tank the Chinese Academy of Fiscal Science, speak on March 20, you would assume the mere mention of stimulus in 2020 to be forbidden. The “nature of current policy is one of rescue and hedging, rather than stimulus,” he said.

Beijing’s answer so far has been to pursue a “halfway stimulus”, in the words of DBS’s Baig, that tries to stimulate consumption, boost liquidity and manage bad debt without flooding the economy with too much fresh credit. Even if it is a clear-minded strategy, a “careful balancing act”, according to PwC’s Dilley, it’s not at all clear whether it will work.

What is certain is that China, like everyone, faces an unprecedented period of economic contraction, warns Baig. “They must do something to shore up domestic demand.”

Raise taxes? Unlikely. Try to print its way out of trouble? Conceivable. Baig reckons the likelihood of another round of stimulus is “increasingly high”, given worsening global conditions, but that any new measures won’t be close to the scale of 2008.

And for good reason, China can no longer afford it.